Book a 30 minute FaceTime or Skype chat to help work through a sewing issue.


Truth is I am not firing on all cylinders at the moment and my half days feel like full days right now.


Yesterday was a great day by the way. The whole day.


Some sewing friends and I met up at one friend's house (where she has the most beautiful and well equipped sewing room of all time) for an afternoon of sewing and then a BBQ.  This was my first social day out and man did I ever enjoy it.


I knit and gave my two cents worth on Sheila's tissue fit of two jackets, she makes beautiful jackets, and checked out Cindy's version of this skirt, which I have been mulling over since last summer: 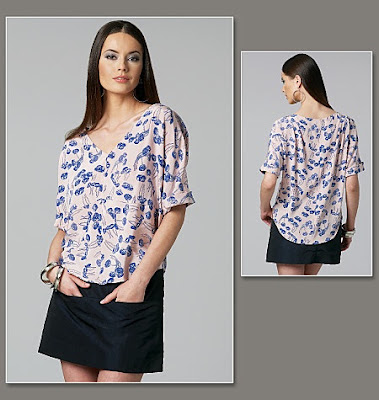 It's a pattern, like many others, you really need to see in person before you can make up your mind. I sort of thought initially that the pockets looked like I should be selling hotdogs at the game, you know to keep change, or with one of those coin dispenser things on a belt, but it's far classier than that.


This, I realize, would be a perfect golf skirt, you could keep your tees and a couple of spare golf balls in there. Maybe some snacks, and it is an excellent housework skirt.


I could tear around here, when I am back to tearing around, picking up pins and putting them in those pockets before someone found them in their foot, spare buttons, single socks, dried dog food that someone named Rascal has transported to another room.


The possibilities are endless. Classy stuff. And I could make it in denim, which I still have left overs off.


And what do you know Vogue patterns are on sale on BVM this morning so obviously the sewing gods are right there with me on this one. Into the cart and checked out.


But that's all later.


Always one mental project ahead.


Here it is, you tell me what you think and I will tell you what I think:

Email ThisBlogThis!Share to TwitterShare to FacebookShare to Pinterest
Labels: Vogue 8810

That is a great dress (even if you do have to stand a lot:)
Terry

Too funny, I have a small dog that would match perfectly with this dress.

It looks good in the pictures! Sadly, it's not the practical dress you had in mind, if you can't sit down!

Love your posts, you ALWAYS make me laugh! And the dress is great!

Sandra Betzina advises adding walking ease to button-front garments, even coats. Slash next to the centre front, and spread the pattern apart so that you gain about 1 1/2" at the hem, it still hangs straight but gives you more room. Definitely a problem with these dresses.
BTW, I think it looks great on you.

I LOVE your posts...you always make me laugh! I've got this dress on my cutting table right now. So glad you made mention of the button issue. My fabric is a stretch chambray but I think I'll take your review in advisement and add a bit of ease to the skirt so that I CAN sit down. I work at a desk all day, so sitting is a must!

The armhole size...is it a bit large you say? I always have this issue with arm holes on just about everything, so do you suggest I raise the bottom of the armhole up a bit?

It looks great on your BTW!

I love your posts, always a pleasure reading and you make me laugh... It's the way you write, your great sense of humor...

So glad they didn't cut out your sense of humour when you were under the knife ! It looks great. And you do too !

Carol I wouldn't lower the armhole as much as put more fabric at the front of it (you can see why in my picture) unless you have attractive armpits which I do not.

I made that skirt in a stretch denim and it seemed a little heavy. It could have been the fit, though, that made it seem a little off. It has a wide waistband that sits just a tad above the natural waist. I have a low waist and found it extremely uncomfortable. The skirt is sitting on the donation pile and I will remake it with a facing top instead of the waistband. Just a heads up if you have a long torso.

The dress looks comfy and casual, but I hear you about the worry of flashing when you sit down!

Trust your instincts! Your denim dress is just fabulous with the changes you made. You look so slim in it, too.
NinaLBoston