Before I get to what's on my mind tonight I should apologize for being a rotten sewing blogger.

In the last four days I have made two garments for my daughter-in-law and another jacket for my husband. But before those could be photographed, which is what a good blogger would do, the jacket went off to work on my spouse and the things for my DIL got packed to be delivered by my daughter who is flying out tomorrow to meet the new baby.

For the next little while I am going to be making some crazy things for myself and you know I do stand still enough for pictures.

Now back to the subject at hand.

For various reasons this week I have been thinking of the things we say to children and how those things, if we intend to or not, get carried away with them as part of who they are, for life.

That's a pretty significant responsibility and it is something all of us need to be mindful of.

Right now I am considering all the times we affect young children not by what we tell them they can do or who they are, but of all the times we limit them by carving off some experiences as not for them.

I am thinking for example of toys, among other things.

I have three grandchildren here, the two girls and a boy.

Over the holidays a woman my daughter works with sent over bags and bags of American Girl doll clothes her own kids didn't need any more.

It was quite a haul, a huge number of outfits and even an American Girl bicycle. Imagine how cool that is.

Well the girls have been happily playing with all this stuff for a while now and little Billy, their brother, has just been relegated to watch and plead for a chance to put on some tiny jacket, some pair of tiny shoes.

Last time I was over this week doing after school duty he told me that more than anything in the world he wanted and "American Girl Boy doll."

Of course he did.

So on the way home I swung by Walmart because it was on the way and checked out the toy department. Myself and another grandmother, who was there looking for a baby doll for her African Nova Scotian granddaughter, went through the shelves. I was pretty pleased to find that there was quite a variety, Asian dolls (now that's about time), dolls in wheelchairs and dolls with arm braces. Dolls that looked like the people who would play with them.

Well this is what he thought of that: 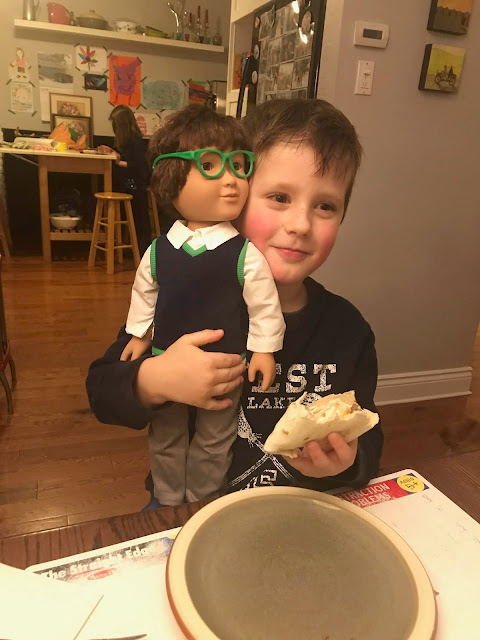 Of course if I had been thinking ahead I would have realized what would come next - a request for clothes. Pyjamas, a bathing suit, and of course, because this is Canada - a hockey uniform.

This last one made me smile.

Billy's dad, my wonderful son-in-law, tells a story of when he was a kid and quit hockey. He just decided he would rather stay at home on Saturdays and watch the cartoons than go to practice, like his brothers.

Well the first Saturday morning he did this his dad threw a Sears catalogue down the stairs to the basement. "Here, if you are going to stay home, pick out a dress," his dad said.

The irony of course is that one of his brothers, down at the rink, would end up coming out as gay.

They all love that story now.

The thing is of course not that boys can't play with dolls (or bake in Easy Bake ovens as this viral campaign proved) but that by not giving young males little people to play with we are, even unintentionally, cutting them off from opportunities to think about and practice taking care of other little humans.

What a terrible thing it is to dam up something like that flowing in any child.

I was thinking of this after Billy, with great gentleness. held a newborn last evening, or of my son in California who takes care of his infant daughter as completely and as carefully as his wife.

Billy's sister already plays hockey. I am thinking that next time he is over he and I are going to cut out some doll clothes. I am sort of disappointed in myself that I didn't think of this before.