I am in the process of doing my twice a year sewing of samples for the Fabricville blog, Fabricville being the Canadian equivalent of Joann's in the US or Spotlight in Australia, although probably bit more fashion fabric oriented than either one.

I am working with some really interesting suede knit that has a rayon/poly knit fused to the back of it - nicer on the body than some of the scuba versions, I thought.

This has not been previously announced but this fall is also my season to work more intelligently with my cover hem.

I have a Juki 1500 which is a great machine - I bought it because it handles the bulk of cross seams without hiccups. So it's a strong machine and trouble free but not one for which there are many attachments.

Of course now, due to many evenings spent in the bath with my phone which I shouldn't use suspended above water (already have had one repair because of that and let's not even talk about the cracks in the screen), I realize that a cover hem binder is a great attachment but one that I don't have for this machine.

As a result I have bought from some mysterious source in China a generic version that is about the size and appearance of a bicycle gear and I have no idea how I am going to attach to my machine before I can even attempt to use it. 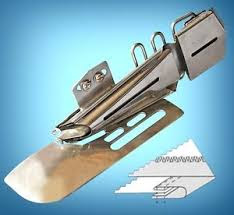 Current Facebook group advise suggests drilling your own attachment holes (Ha) or machining up a nice attachment platform in the sheet metal shop some people seem to have out in the garage.

We actually don't have one of those sheet metal set-ups here  since our garage space is currently filled to the brim with semi disassembled snow blowers, what I am told are investment motorbikes, ride-on lawn mowers inherited from my high speed driving late father-in-law, and towers of winter tires.

No room for a sheet metal substation. as useful as I am sure they are.

So as a fall back I note that some woman are just taping their binders in place with packing tape.

That's probably what I will do.

None of this is on topic because I haven't figured out how to stick the binder to the machine much less use it, so don't expect to see much activity on that front real soon. But I thought you might find this an interesting topic.

I really do want to start using my cover hem for more than basic hemming, so I have been inspired by this two-side fabric to make a reversible skirt. This might be useful when I travel.

Am I the only one who puts literally nothing much in her suitcase and still can hardly lift it once the top is zipped closed, and routinely pays excess weight baggage fees every time she flies?

I need a ton of multi-purpose clothes.

The pattern I used to make my skirt is a beauty Jalie's Lisette: 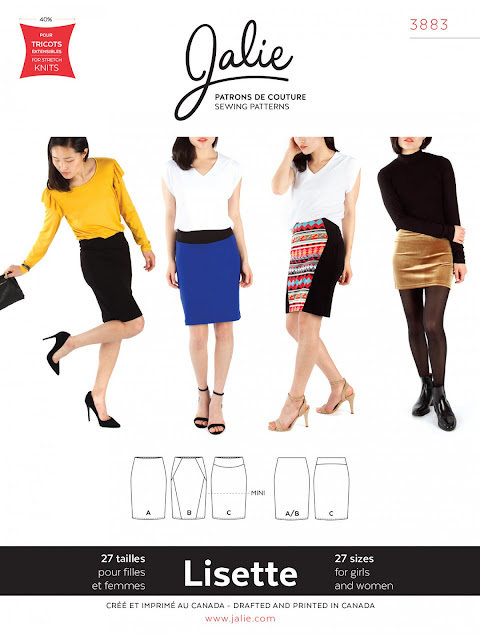 This is such a nice pattern with a great peg shape and a really nice contour yoga style waistband in View C, which is the view I have made before.

There's something really important you need to know about the Lisette however and that is that it is tight, negative ease tight, and really requires a very stretchy fabric and a really flat abdomen to avoid the dreaded belly cupping.

The first time I made this skirt I liked it but really decided that I was just too old to look like I was in my second trimester.

When I measured the pattern I also discovered that this knit skirt had been drafted to be about 3" less body measurement in the hips, so of course it was extremely body conscious.

So this time when I used this pattern again I took the measurement of my own hips - 40" - and added that 3" and then selected the pattern size for 43" hips. My idea was this would give me a knit skirt that would just be exactly my measurements, but because it was a knit still stretch enough to be comfortable.

Pretty crafty thinking for a person who cut this out in her slippers and an apron over a nightgown just after breakfast I thought.

Here is a shot of the original skirt, the one in my usual Jalie size laid down over the skirt I made in the size of someone who has hips 3" bigger than mine (also representing a 40" skirt, if you are not confused already): 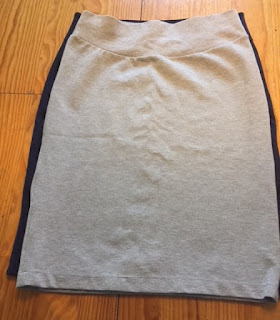 Sorry the grey skirt looks wrinkled. I grabbed it from my to-be-given-to-someone-smaller pile, for the picture.

Now back to my fabric. One side is navy fake suede and the other a grey knit, sort of like a T shirt. Since I travel a lot with family everywhere and I had this brainiac idea to make a reversible skirt, I decided to use my cover hem on the "wrong side" the grey jersey, to cover up the seam allowances.

In my own mind I figured I would have two skirts, one a nice classy suede one, and the reverse a sort of atheleisure look since the reverse side of me, not the maturing dog walking basement sewing side, is so hip.

So here are the technical details:

1. Side seams. Stitched these first on my sewing machine with a stretch "lightening" stitch. A triple stretch stitch or a narrow zig zag would do just as well.

2. I trimmed the seam allowances down to about 1/4", knits don't fray, and cover stitched from the right side, more or less centering my stitches on either side of the seam. I had navy serger thread in the needles and a grey wooly nylon in the looper. Here and there some of the raw edge of the seam allowances peeked out past the cover stitch loops but I just trimmed those away after with my trusty duck billed scissors, which did, as they so often do, save my life. 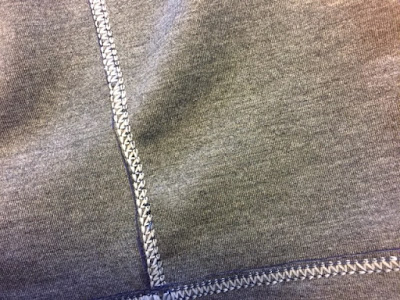 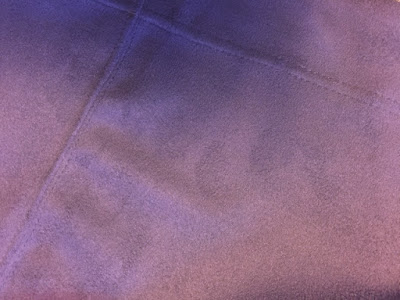 3. Of course when I considered the next step, which was the hem, I realized I wasn't as smart as I thought I was. Of course turning the blue suede to the wrong side to hem would mean there would be a blue hem allowance on the grey side. I solved this by pulling out an old school trick from this old school arsenal and put on a false hem.

A false hem, in case you are new school, is simply a strip of fabric sewn along the bottom of a garment and when this is turned up the seam becomes the hem fold and therefore is invisible. I stitched a grey side of the strip (I sewed it in a circle to match the circumference measurement of the hem)  to the blue right side of the skirt which of course gave me a hem allowance on the grey side that was also grey when I turned it over to hem. I cover hemmed the hem just like I did with the seams.

So this is what the hem on the skirt looked like from the right side: 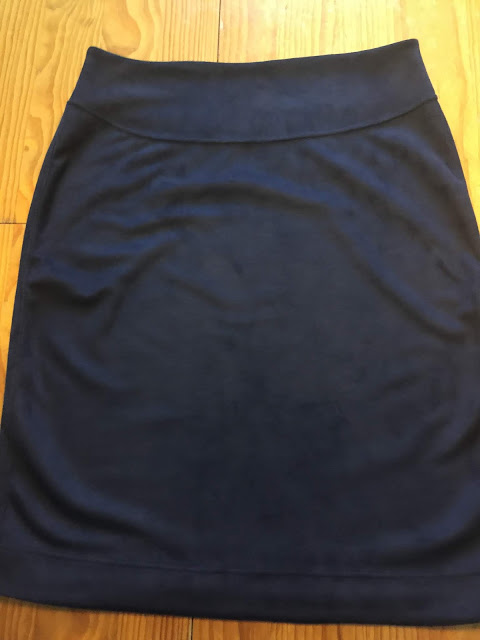 And the turned up hem with the raw edge more or less covered by the cover hemming on the wrong side: 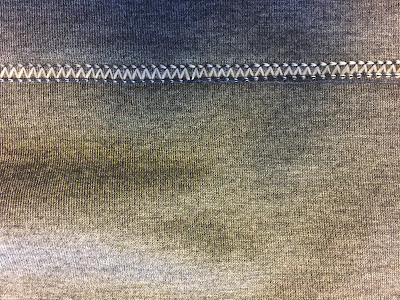 And here is what the seam joining the false hem to the skirt looks like when the hem was finished: 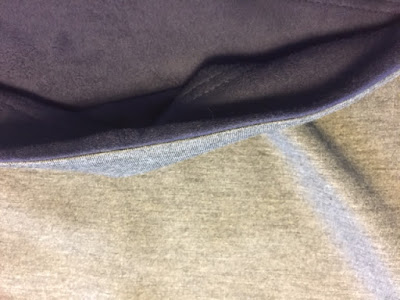 4. Having warmed up on the hem I did more or less the same thing for the waistband, that I split in half along what would have been the fold line, added seam allowances. This allowed me to make a waistband that was one side blue and one side grey. I then stitched the waistband unit to the top of the skirt, blue right side to blue right side, then cover hemmed that done like I did the hem and the seam allowances: 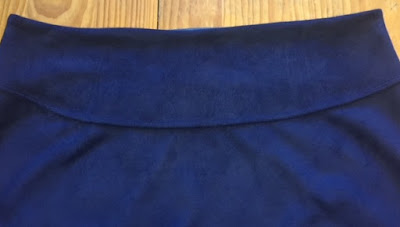 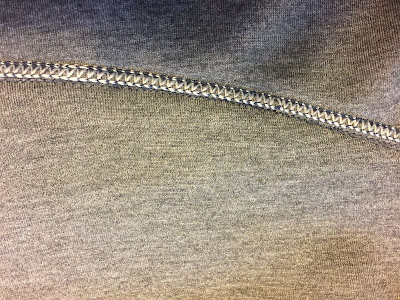 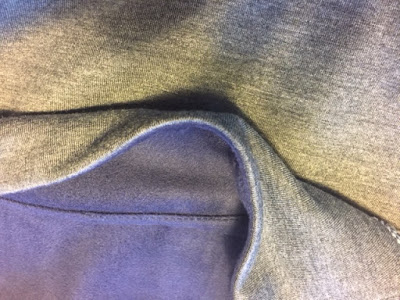 I am pretty pleased with this project. I have done a lot of sewing for other people recently, and I was so happy to do that, but it did feel good to invest a bit more time than was necessary on something I can wear.

Next I am making a jacket to go with this (my daughter has worked hard to keep me from veering off to matchy match with only mixed success) and when the whole deal is done expect some pictures of all of this on me.

But in the meantime I thought you might find the construction details interesting.
Posted by Barbara at 7:36 PM 17 comments:

Email ThisBlogThis!Share to TwitterShare to FacebookShare to Pinterest
Labels: sewing a reversible skirt

Another one of countless Adeline dresses

There have been many versions made of Stylearc's Adeline dress and I have made several for myself and now two for my remarkable daughter.

The pattern is intended for a woven but really it works just as fine in a knit.

Katrina needs really comfortable clothes right now so I made this version in a French terry. The only real change we made was to dispense with the shaped hem facing, probably necessary in a woven, as Katrina found it too restrictive for movement. In a knit this uneven hemline turns up just fine and of course I cover hemmed it since I am trying to use my cover hem as much as possible these days.

Here is how it looks, really who wouldn't use a dress like this?

This is a cocoon dress, wider at the waist than the hem and the pockets are large and as a consequence set quite close together. This may seem funny when you put them on but really, as a place to put hands, are quite functional. 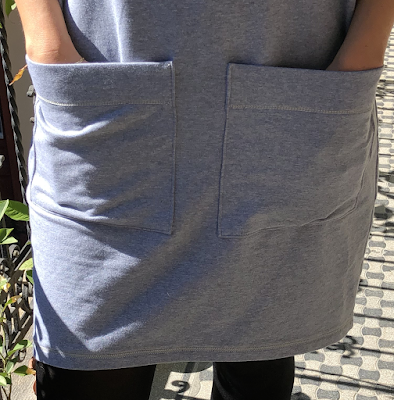 The V neck here is faced, this is a pretty plain dress, but there is a nice roll-up detail with the sleeves that I actually think looks even better in a knit than a woven. I just ditch stitched the cuff along the seam line on both the top and the underneath side of the turn back to hold it in place. 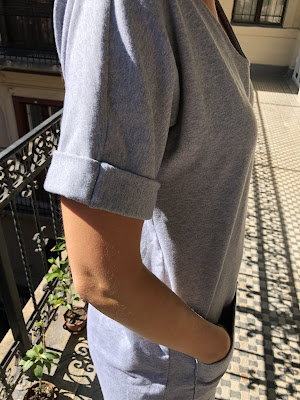 I think Katrina likes this about as much as anything I have ever made her and it's always nice to score a win with adult children who have better taste than you do.