Completely random post with a bunch of pictures of my week

The day after tomorrow we head out in the rv down to Texas.

This whole winter and our delayed and complicated exit is pretty weird.

However my daughter is settled right now and has promised a thousand times to let me know if she needs me. The neighbours are watching the house, and my niece will be staying here sometimes too.

I have packed up everything I need including three sewing machines, some pre-cut projects, a case of vintage sewing samples for Tulsa, and some knitting I need to be sitting down long enough to finish.

What we can organize we have.

However this afternoon my 87 year old mother-in-law broke a bone above her wrist, but that is now in a cast and appears to be a clean break. Not the best time to leave her but she will go stay with my sister-in-law, so hopefully she will be OK too.

You should see it around here,

Currently the rv is parked in the driveway snowed in and attached by ice to the driveway. We put on our boots and winter coats and dash out to pack things away in it in spurts.

It is of course a mini house so there is a lot of just transferring things out of the relevant rooms into their mini editions in the driveway. Out go the comfortable pillow and the contents of my makeup drawer. Out go too many pairs of my shoes and books to read. Out go the spices and the coffee maker. Out it goes and we try not to slip on the ice as we do it.

My husband is project manager of this stage of our year.

He does itinerary and tire pressure and filling the fridge.

I do working myself up to my annual performance as Nova Scotian's most delicate ageing princess.

You see until we hit Virginia at least we will be surrounded by cold outside the rv.

All the rv places to park and stay are closed off season. So we have to stop at night in places that let you do that like overnight truck stops - my husband has philosophical issues with paying for motels and dining out when we are so fully equipped on our wheels. And we do have lots of good heat, water nearly all the time (got to watch those freezing pipes), an electric blanket, a stove, and a fridge.

But really there are only so many nights that this princess likes to go to sleep next to the sound of a row of semi trailers running all night.

So I am putting a lot of effort into setting myself up to be comfortable on the trip down - until we get to Texas where it should be warmer and until we can get to our first laundromat.

With appropriately low standards set for photography I am going to share some marvellous back of the bathroom door shots of what I have made this week, with comments. I stuck to a few of the same patterns for efficiency sake. I am sure once we are on the road I will be glad I pushed myself to get all this done.

I made a series of Patterns for Pirates Favourite Tee. The first few I made were as per pattern with what was a fairly wide neckband. I used a lot of cotton lycra for these tees and the wider band sticks out just a shade as you can see here in a blue version I made previously and a couple that I did this week: 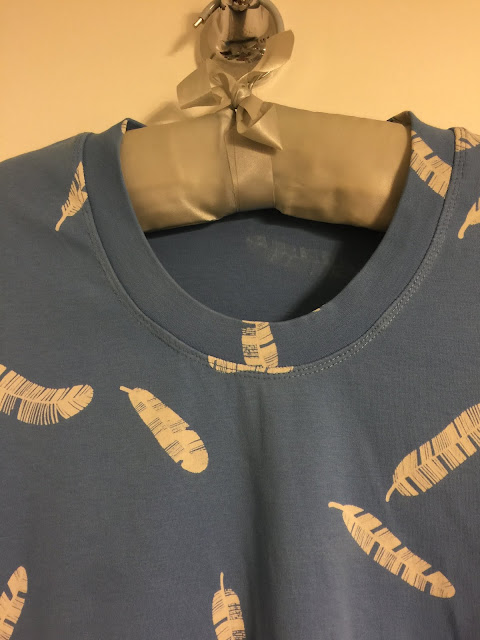 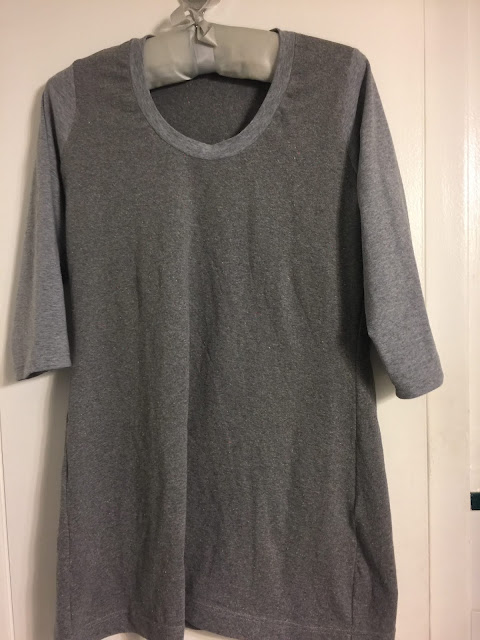 I have been indulging in a lot of sewing of warm and practical rv type clothing.

I will be sharing that highly useful but probably non inspirational type sewing over the next few days.

Now onto the inspirational part.

The weakness of this blog is the lack of those beautiful pictures the other bloggers I admire can do.

My husband has many wonderful qualities but has not mastered iPhone shots that capture both my head and are not on an angle.

I often think I should get this visual side together but am stalled by not wanting to take my limited sewing time away in a photographic detour. So for those of you who do manage to take pictures that actually look decent. any advice would be appreciated.

In the meantime, in the interest of speed and in getting something up that might have a handy hint in it. I am going to entertain you will some scandalist shots taken of the back of the bathroom door.

Not very glamorous. but you have to remember I haven't read your photographic advice yet.

And there is a sewing point I want to make here.

Now I have made several of these for other people but this one was for me. This top has driving-in-the-rv-down-the I-95 written all over it, with a second life in campground walking around.

You will notice no head. Of course this shot was taken after I had walked two dogs in the wind so that is probably a good thing, 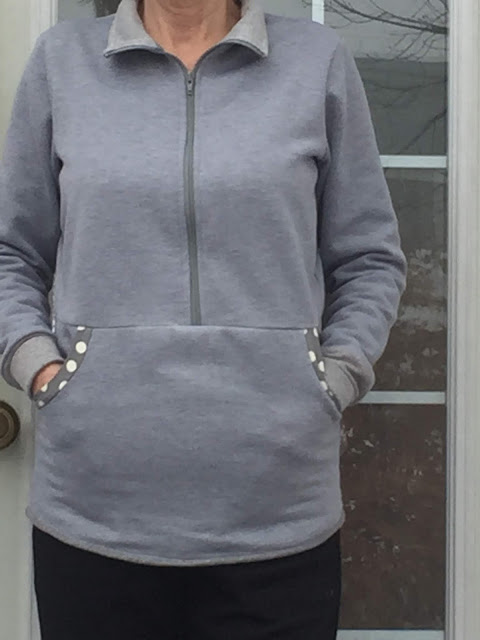 I really really love this pattern.

It is super easy to make and comfortable. The ladies' version (there is a kid's version and a man's available from Lovenotions) has a view with knit band along a sort of curved hem that I think is more flattering to most of us than a traditional ribbing band. 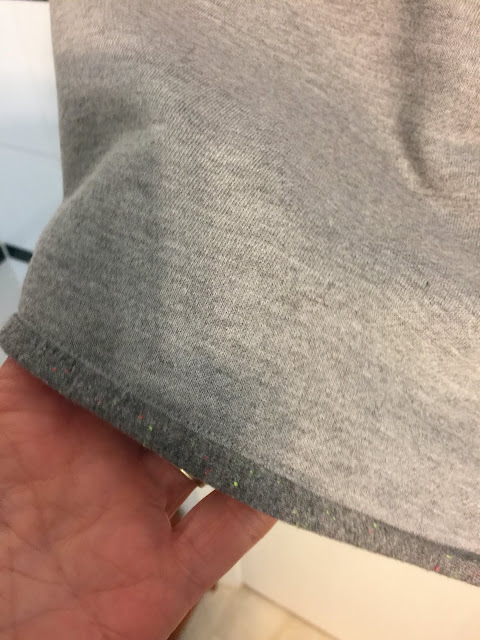 It also has a giant sort of kangaroo pocket that looks more like two normal pockets - and these are finished with some easy little knit bands. I used some rayon knit I had saved from a T shirt project: 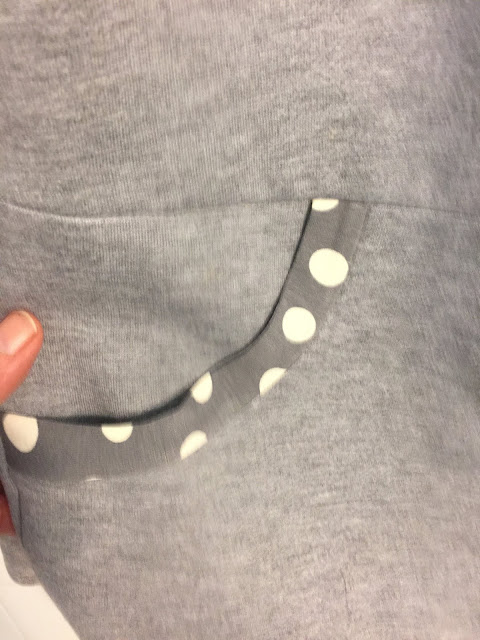 The best part of the who project to me however was the way the  upper cover/neckline was finished - a  method I have used years ago and sort of forgot about.

You know in any kind of collar like this one getting the inside bottom edge of the upper collar to look nice when the collar is open (think golf shirts, any banded shirt collar etc.) is tricky.

The construction process was then to just sew the under collar to the neckline, then to sew the upper collar (the one that would be next to your neck when worn) to the undercollar already attached to the garment, just along the top and short sides.

The next step was to just stitch the free bottom edge of the collar to down to cover the seam - either by hand or by machine.

I did this part by hand because I felt like sitting in the chair with Daisy and relaxing at this point.

What makes this way of doing a collar is so cool is that the bottom edge of this collar piece is already been finished before it hits the garment - so there is no need to do any folding under or tricky stuff - so easy and so neat! 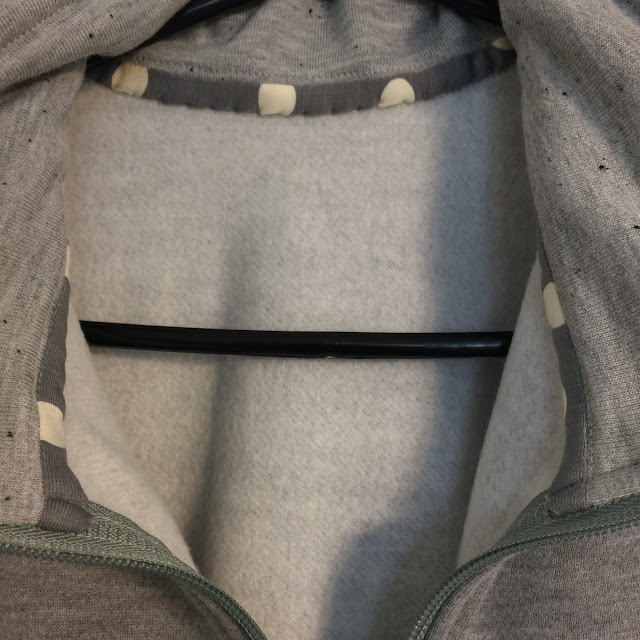 I love how stress free this was.

My next project was to make a sort of housecoat thing for running around the rv and campsite.

And to wear too when I go  off to have a shower in the campground washroom when I am in the mood for a shower in an area larger than a phone booth and that does not also include someone standing outside the bathroom asking you to save water- not something I am usually in the mood to do when I am finally getting a hot shower after a long drive.

I used this Vogue pattern 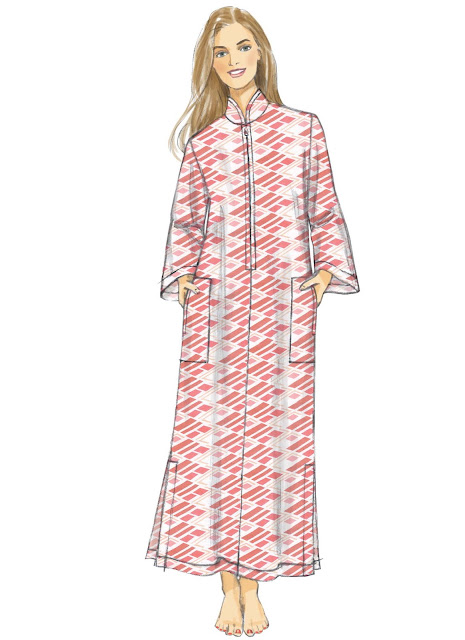 This illustration was exactly what I wanted but unfortunately the actual garment did not look exactly like the picture when I made it up.

The shoulders for a start are really quite dropped and the sleeves super wide - think kimono draft.

But to be realistic about it the only people who are likely to see me in this unit are old camping type guys whistling along in their shaved heads and hiking boots on the trails in the woods on the way to the bath houses. On their way there of course because their wives have kicked them out of the rv for a while for some peace -because living in an rv with a man who whistles makes you feel like that is what you should do. Every now and then.

So if that is who will observe this outfit, I really am not too stressed that it doesn't look a lot like the envelope picture. 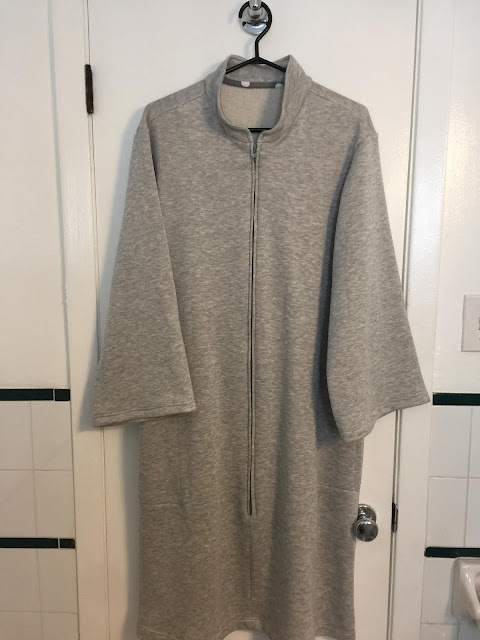 The instructions for the facing at the front when it transitions to the collar were interesting.

The pattern does not have a back neck facing (those are a nuisance anyway) but instead the pattern advises you to slash up the stitching line where the facing ends on either side of the back neck seam and to turn the remaining raw edge of the collar under and stitch it down.

I never like to do this because the slashed up the stitching line part is always dicey and never neat.

However this was the next thing I made after the pullover above so I just used to Constellation technique again - complete with the same binding in the same fabric: 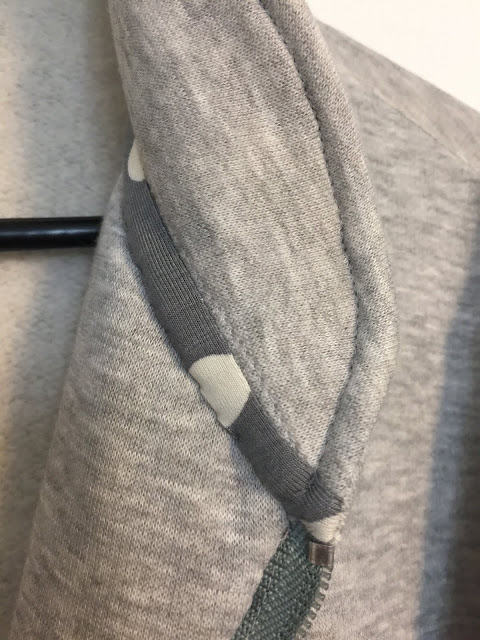 This was really a much better solution and I am pretty pleased with myself for making this adaptation.

Now the thing I want us all to think about are other ways in which we can use this same binding the raw edge, rather than fighting to turn it under neatly, technique to make our lives easier.