I have taken a break before the entire family hits here for 10 days to do some easy sewing. I am taxing this ship slowly onto the holiday season Big Sew runway and thinking of ideas.

One of the things I have decided to do is make a number of quick and easy projects with Kraft-tex for gifts this year.

Yesterday I made a couple of Retreat bags with this wonderful free pattern from Emmaline Bags, two in denim with a coated cotton interior, and one in a most beautiful periwinkle shade of Kraftex.https://www.ctpub.com/kraft-tex/ 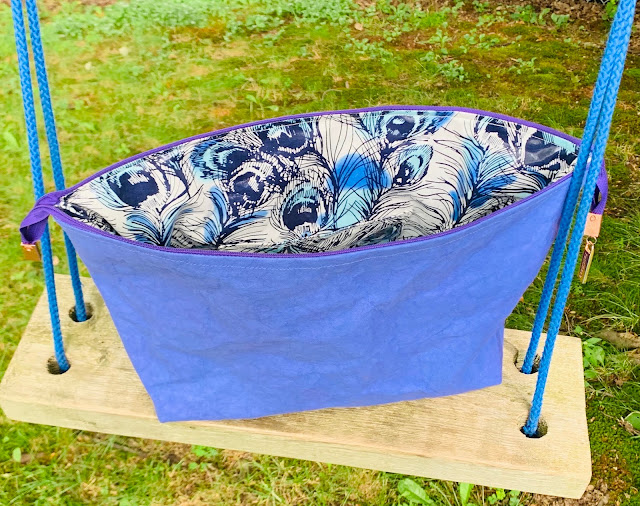 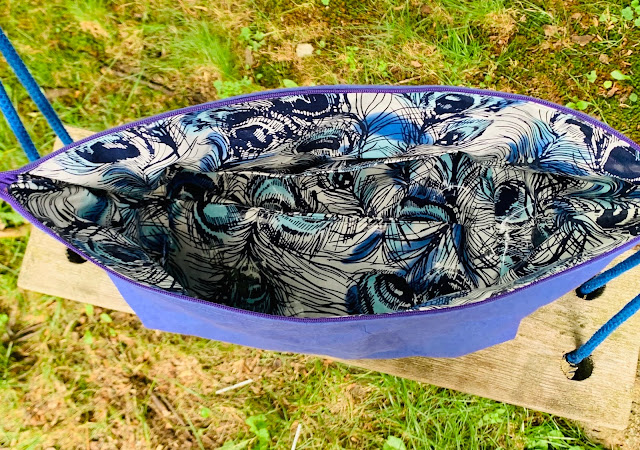 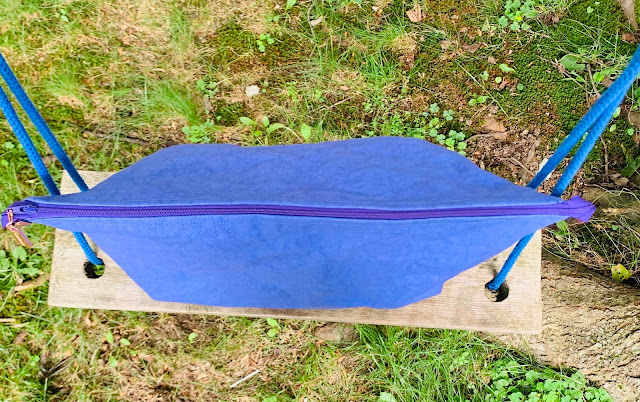 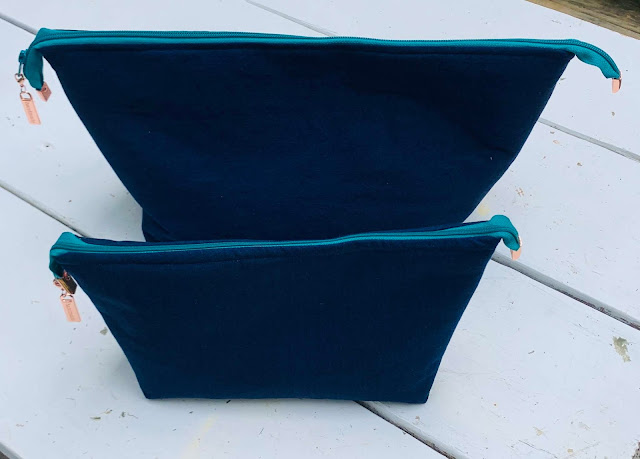 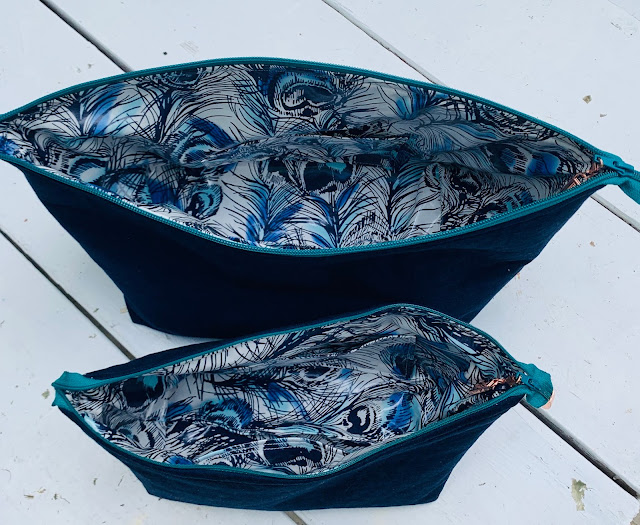 The fabric version required the body pieces to be interfaced and then fused with fleece for support. I didn't need to do any of this in the Kraftex bag because the Kraftex has so much body it stands up on its own - which eliminates steps and cost.

I love this pattern so much because the large size is really big, will contain all your gear plus a hairdryer if you carry one, and so easy.

I alway add Emmaline's wonderful zipper ends and pulls because it adds a bit of finish for not much effort. Their website has how to install the zipper ends which are handy if you cut down a longer zipper to make one of these bags. 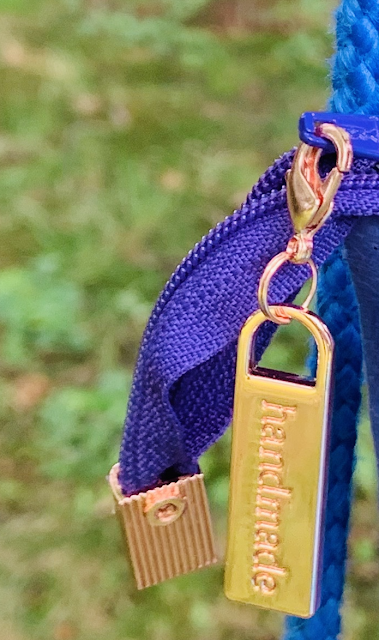 Kraftex is so durable as well as being easy to sew. My husband and I recorded some hilarious videos last winter that show us testing it, including driving over it on the RV, and it held up well.

Here is a wallet my husband made for me with some scraps a few months ago and I have been really enjoying it because it is so light. Another free pattern. Although it carries exactly what my usual wallet carries I often have to check my purse to see if it my wallet is there because I just can't tell by the weight. BTW Kraftex is machine washable and I see this wallet is due that after a summer spent in the bottom of the swimming pool bag. 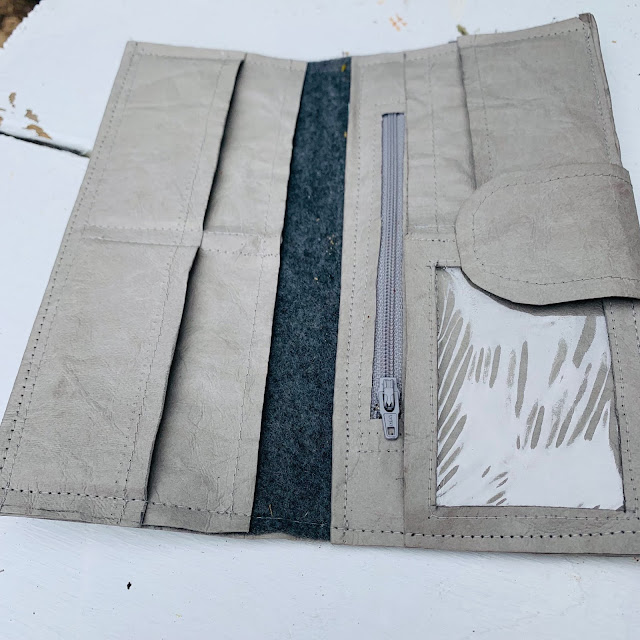 I have decided to make a few of these wallets for Christmas and some other things like luggage tags (I always stand there with 80 other people at the carousel looking for a black suitcase). I am also doing picture frames (got some really neat ones in the works, watch for those) and frames for pictures with fridge magnets. The last is a grandmother special because when the kids make a picture I always say "I will put it on my fridge like that was a real honour. I am also going to make some passport/boarding pass holders for family members who are organizationally challenged like I am.

It's fun to work Kraftex too. These will be the little projects I can make when I claim I am off doing something else and want to disappear into my sewing basement for a few minutes...
Posted by Barbara at 12:18 PM 4 comments:

It is pretty apparent that I have been AWOL for a bit. I am back now.

Here's what's been going on.

First, as many of you know, I take care of the three local kids during the summer when my daughter, who works alternately three and two day a week needs me. I also like to be able to help out at other times too. It is fun but let's say those guys are pretty busy. I had three myself and so I recognize that stage where each one of the three is at a different place in development, and there is usually one doing something surprising off line too.

But because I also had three there have been many moments when I have sat and watched them, usually at the pool place we hang out at a lot, when I felt the sweetness of children in the summer. All the wet towels, all the fights that needed breaking up, and the many, many bowls that I washed after our baking sessions, were a thousand times repaid by those moments.

I am sorry to see summer end.

Also on the personal front I retired finally and completely from teaching the end of June. I just felt I was getting too busy to work on someone else's schedule. And decided to leave while I still had something in the tank.

I have always been an admirer of George Foreman.

Rather than climbing back into the ring one more time he invented the grill. So much better to be that guy on TV with the grill than a shadow of your former self dragged out of the ring because you couldn't think of what else to do.

Man am I deep.

So after my retirement, and with all the yelling one more time on that water slide and that's it we have to get home, I took a while to think about what my grill was going to be or, more importantly, if I even needed one.

I folded fabric a lot and I cleaned my house. I wrote a bit on a sewing mystery novel that is about real things that happened to me.  Some parts I think are really funny and in some still laboured. I found things in my house I had forgotten I had and projects that reflected my high ambitions.

I did some real tailored sewing, will be posted at some point in the Fabricville newsletter, and then I will do some more detail here. In the meantime here is a glimpse. For some reason the light caught my hair and made it look white, can't be true.

I also made and sent off a sleeveless version of the Yari jumpsuit to my daughter-in-law in Berkeley. Amazingly, because I had made this exact same pattern before and it fit perfectly, this one in a slightly looser linen turned out way too long. This makes no sense to me at all.

She is arriving this coming Friday with the rest of the crew (I will actually have my entire family plus one of my sisters here together for nearly a week) for a wedding. I am dying to get my hands on this jumpsuit and shorten it.

All that said, because we know that every sewer always points out the problem before anything else, Maddie looks great in this: 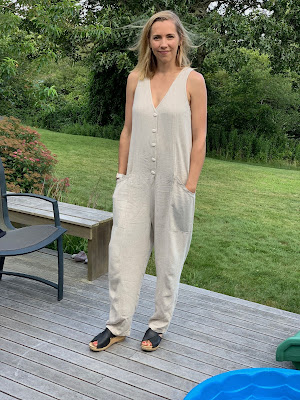 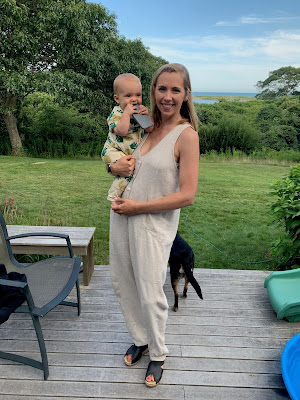 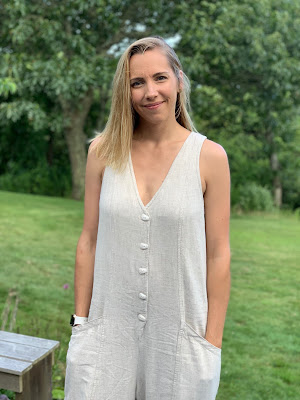 Honestly who would have thought jumpsuits would come back and stay so long? It's getting to the point where I am thinking I even need to make myself one.

It is interesting and exciting to think I have a different sort of life to plan and sew for now. My head is filling up with patterns I want to make.

Now what are you fall goals for life and sewing? I am making the assumption the two are not too far apart.