Whenever I take a break from the blog you can assume that I am either:

#2 and 3 have been at play this week and part of the week before as my son from San Francisco and my daughter-in-law have been in town for a wedding and visit (couple of my son's friends from the States have met and married girls from Halifax who were down there, interesting and random).

My DIL is expecting and I have been making her a few maternity things.

This is the point at which I talk about emotional sewing.

Now let me get this straight. I do not "sew for other people." I would rather go over Niagara Falls in a barrel than replace a zipper in jeans. It is my experience that the kind of people who ask you to make things for them are also the kind of people who have no idea what they are asking, how long it would take, or how those take it in or let it out a little jobs are far more work than making a whole new outfit.

My one real foray into sewing for others happened years ago when one of my sisters and I briefly made wedding dresses. My sister was a nurse and it was for people from her work we usually sewed for. Our grand finale in that little adventure occurred one day when we arrived at the Head of paediatrics' house to deliver dresses for the bride, bridesmaids, flower girl and even grandmother of the bride.

I remember walking up to this lovely house with our arms full of dresses. And being nearly run over by the groom being chased out the front door by all female relatives. He had chosen that exact time to show up and say he had met someone else and the wedding was off.

Man did we drop those dresses fast and run ourselves.

We quit sewing for other people after that.

Subsequently my sewing was all about me or sewing for my children. I did a lot of experimenting. I will always know how much my children love me when I think of some of the things I put on them to go to school, and that they wore without complaint.

Later there was a lull when the kids became adults and went out into the world able to feed, dress, and support themselves. Usually on all counts better at it than even their mother.

This coincided with my discovery of the words "add to cart" and the instantaneousness of PayPal.

You could say, with accuracy, that I filled my empty nest with fabric.

And now, like all the other times in my life when sewing has stepped in with a life solution, consolation or new direction, it is giving me a way to mother a family who is no longer under this roof.

Now- particularly now that I rely on their good taste rather than my own- I use my sewing to build my emotional bridges.

I make shirts for my two sons in the States, and am starting one for my marvellous son-in-law down the road. I make shirts for my daughter to wear to do one of the hardest jobs in the hospital and for my niece as she trains to do the same. I make warm jackets for my husband so he can finally have clothes that fit him, and swimsuits for the kids to wear all summer. And I have made maternity clothes for my wonderful daughter in law who is way too far away so I can in my own way make a contribution to an exciting time in her life.

Anyone who has ever woken up in a quiet house and has only one or two toothbrushes in the bathroom rather than the half a dozen that used to be there, next to the toothpaste squeezed in the middle with the top left off, will know what this time of life can feel like and how important it is to reach out to family still.

There is always a time in every mother's life when she never needs to wonder what to do because someone needs her. And there is another time when she realizes they don't.

What sewing, sewing that always comes through for me, is doing right now is give me my job back. It even makes me sometimes feel overwhelmed because I have so much to do for everyone and they are all waiting for it.

How normal does that feel?

So now onto some patterns I have used this week on the maternity sewing binge, because of course there aren't any maternity clothes in the stores at all now. Unless you count the ones made of polyester and I don't.

This week I used two Patterns for Pirates patterns - the for purchase pattern Cocoon cardigan and the free pattern for leggings, the Peg Legs with the add-on that includes a gusset the maternity add-ons.

Here are the pictures but really you should go and click the links to see how these two patterns looks on every body type - something the indie patterns do so well and the Big 4 just doesn't.

Also a giant shout-out to P4P for their wonderful range of free patterns, really quite impressive, and there are a few more of those I want to try out this summer: 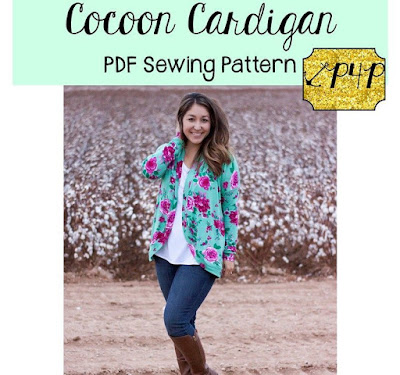 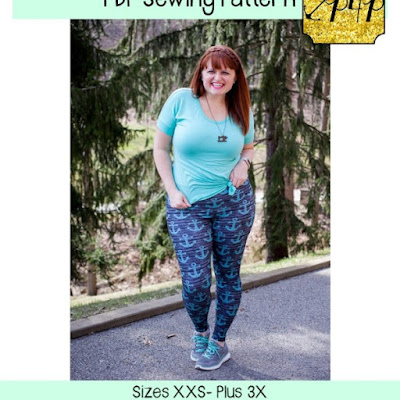 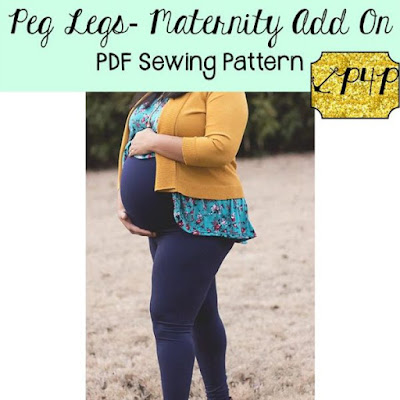 Now I don't really have my pictures of my versions yet, I just passed these onto my DIL before they left for the wedding, but those will come.

So all I can give you here are some shockingly bad hasty pictures of the leggings snapped on hangers on the back of a door. Hopefully they are just barely clear enough for you to see the shape of the over the belly version we decided we like best. I made Maddie three pairs initially with three different waists, these ones and two under belly bands, but she found the over the belly most comfortable.

Now you know I loved my Jalie Clara leggings so I want to point out a difference between the Peg Legs and that pattern. I would describe the Clara's as more of a real workout legging, a close fit definitely with some caution that you need a really stretchy two-way knit to make these work.

The Peg Legs are not quite as fitted, still leggings of course, but with more room in the thigh definitely which is why I thought they would work for maternity adaptation.  I would describe them as more everyday around the house leggings with not quite as strict a requirement for super stretchy fabric.

I am thinking though that there is no reason why I couldn't just sew that P4P over belly waistband onto the Clara's (they stop with the waistband seam at roughly the same place) and will turn that idea over in my mind, probably around 3:00 am.

So there will be some follow-up on this post, probably with some pictures even of my own cocoon cardigans, let's look for that.
Posted by Barbara at 3:37 PM 7 comments: