I was trying to explain to my husband how it feels to want to sew but not have good fabric nearby.

Since he is an obsessional cook (if you are having trouble putting on that last ten pounds you just drop by) I just said to him that it's like wanting to do really good cooking but only having access to the corner store. "Or no name ingredients," he said, "Is it as bad as that?"

Other women who grew up on the Canadian prairies can back me up here on what I am about to write about now.

Out west, where I was born, cabin fever is real.

I grew up with the stories. Of war brides who found themselves deposited in, say February, on the prairies who lost their minds. Of folks who opened the door one day and saw it was so white, snow and sky, so they could no longer see a horizon, so they started walking. And that was that.

There was a town near where I grew up where the farmers would occasionally go into the barn and hang themselves in the winter. The town was actually sort of famous for it. No one blamed them, how could they? To be fair this was before the farmers all built curling rinks and started going to Arizona after Christmas. Things got better after that.

These stories should give you a sense of my current state of mind.

And I'm tough. My grandfather followed sled dogs and my grandmother snow shoed her way around the banks of the river in Winnipeg. We knew how to do this in my family.

However we had three snow days this week for the school kids, and the snow bank across the street is nearly as high as my neighbour's roof.

I am pretty much ready to pick up Daisy and the husband and get myself to Florida. In fact I have my bags all packed and we are not leaving for three weeks.

I need to get out of this particular cabin. I have been socking on the weight like a bear in hibernation. I have been lying in my bed at night and thinking about good fabric and how I need some.

I remember when Eaton's in Canada had sand-washed silk on bolts and their own brand of baby yarn. I remember working in Melbourne Australia and how the fabric floors at Myer's and Buckley and Nunn's kept me going at lunch times from work. You used to go up the escalator at Buckley's and, was it the fifth or seventh floor, it was all fabric.

Swiss cotton and Viyella by the table like it was a normal thing.

I lie in my bed surrounded by snow drifts outside and think I need to be in a place like that again.

Why didn't I stock up? Why didn't I know that those good fabric departments, would be replaced by racks of dark polyester dresses manned by sales people who were just passing time?

Department stores used to be something. I remember my grandmother, the snowshoeing one, say she had a friend who was a "career woman". She was "in coats, at Eaton's." A very good job my grandmother said. That was before the Eaton boys drank away the fortune and you went downtown to shop instead of out of town.

As you can see I am one step away from the back door and starting walking.

I am pretty sure I am a hot weather girl at a cold weather address.

That will change soon.

I am going to have an afternoon in the garment district on the way down to Florida the end of the month. My husband is dropping me off in New Jersey at the side of the road and I am taking the train into Penn Station and going to start shopping.

I have a lot of dress sewing to be done for this wedding. The flower girls and my daughter and my son's girlfriend and later for me. I love my youngest son's girlfriend too. She is really beautiful but has not been exposed to good fabrics like I think a young woman should. I want to make her some good dresses, dresses where the lining is silk. That stuff makes a difference to how you feel about yourself and to what you feel is possible in life. I really believe that.

I will probably spend the afternoon collecting swatches and go over everything with my other son's fiancee at dinner and then call in orders.

I have actually bought some machines, a vintage Bernina and a Pfaff serger to be there in Florida when I arrive, and to stay there between visits.

I am wrapping up my sewing here.

I made three more pairs of those Lucinda pants and some bamboo T shirts so I won't be sitting there sewing naked. Since they are all packed I won't show it all to you except for this one shot, nothing to write home, about but comfortable and purpose built:


I also made up a gore skirt from Stylearc, using an Etsy pattern, this one: 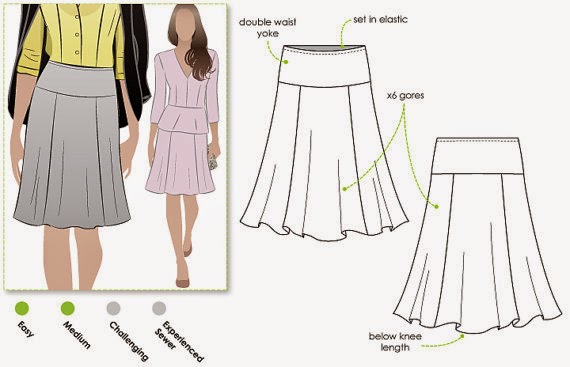 The girl in the drawing had obviously not be hibernating, or had a husband who appears to be opening a bakery in the kitchen, but here it is on me:

I really like this pattern, a nice basic skirt in ponte, and one I am going to make many times again. I can't believe they are letting me wear skirts again that look like the ones I wore when I was in university.

Well off I go to mark more assignments and break that up with online fabric snooping. Soon I am going south.
Posted by Barbara at 5:05 PM 24 comments: