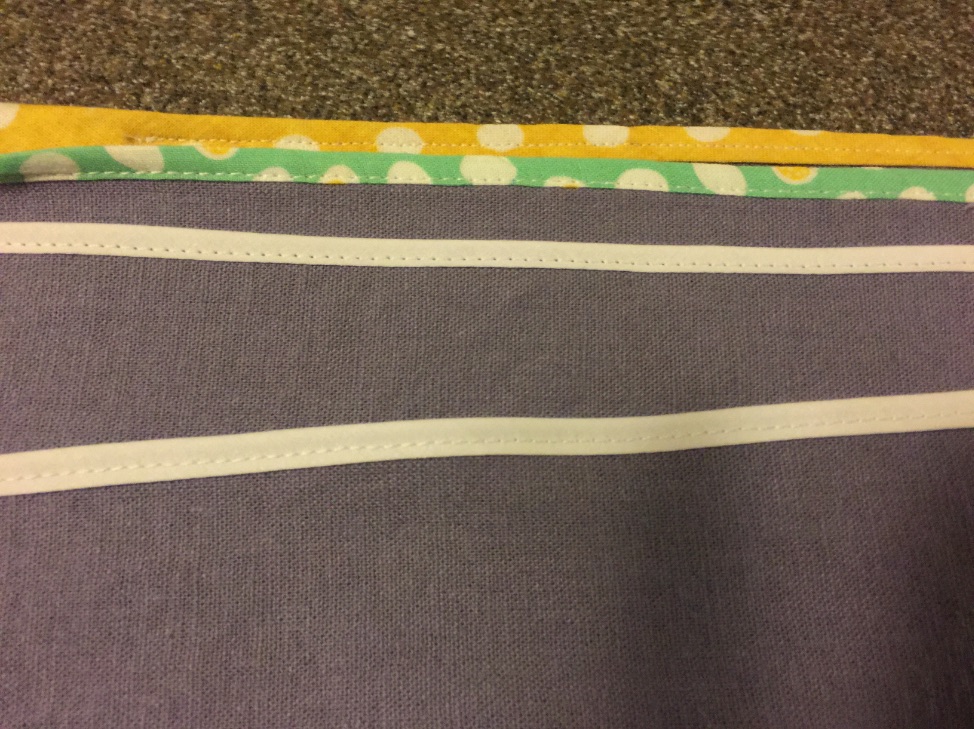 A binder, sometimes called a bias tape attachment in its modern version, can be used to attach pre-folded or unfolded strips of fabric to any raw edge. I find the older versions far more effective and precise than those sold today.

Different generations of binder are available. The oldest, and simplest, have a scroll that feeds bias strips of fabric around a raw edge of fabric and while it turns the edges of the strips under before the fabric reaches the needle.

Later versions of the binder, called multi-slot binders, also have spaces along the scroll that will accept pre-folded binding or finished tape or ribbon of many sizes to bind or cover an edge. Here is the binder used with the first and largest slot to turn under a bias fabric strips: 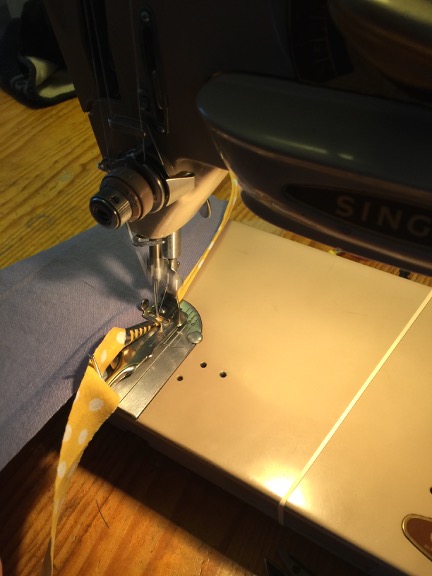 Some of the multi-slot binders, particularly those made by Singer for slant needle machines, also have posts to help the binding feed into the attachment. Honestly aren't these beautiful pieces of engineering? These are my favourite of the binders because they are almost hands free. 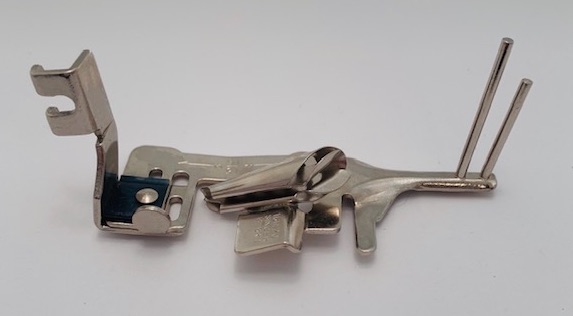 Tricks for using it

If you are getting used to a binder it is probably easier to practice first with purchased pre-folded bias binding which has been stiffened. This just makes it so much easier to feed through the unit without a lot of attention. You can of course replicate this by spray starching your own custom made binding and pressing under a fold along each long edge. Once comfortable with how the attachment works you can make your own custom binding with the help of a bias tape maker.

At the machine it is important to adjust the binder so the needle will fall close to the edge to be bound. This is done by a screw in the older models, or in the slant machine post binder below, by pushing on a thumb lever to the left of the needle opening in the foot. 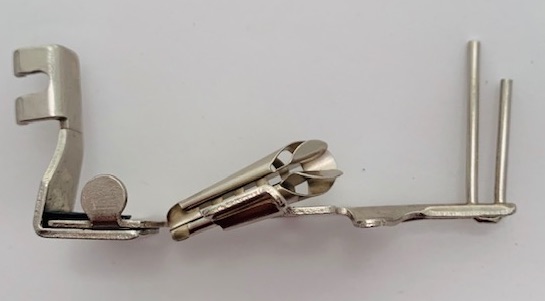 As with most attachments holding the binding up slightly, rather than flat to the bed of the machine, is also helpful.

The binder takes a bit of practice but is worth every minute of that. Early eras sewists used these attachments continually. Think of all those vintage patterns we see like aprons, now in the original or in replicate, with miles of bias bound edges. We copy the garment but we haven't imported the time saving tools that were used to make them. I sometimes think my grandmother would be amused see us laboriously stitching on bias tape, pressing, turning it under, and topstitching. Busy women with households to run didn't have time for that, not with a binder handy.

Note all binders can be used to make ties too. Simply feed in the folded tape and start stitching: 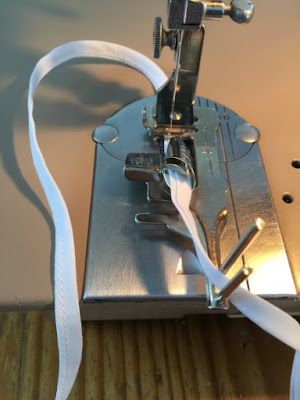 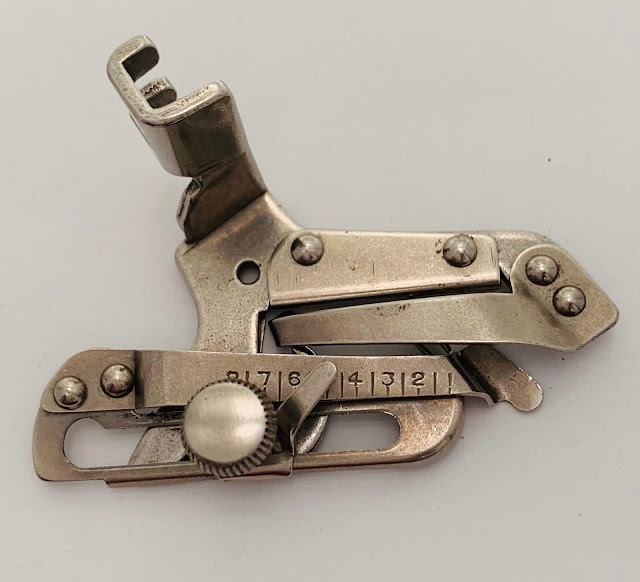 Concept:  Although the adjustable hemmer looks very complex it is actually quite simple. There are two parts- on the front, a hem depth measuring scale and on the back, a hem folder-underer  (hope you can follow the technical terminology). Once set up, the adjustable hemmer will turn under the raw edge of the hem allowance and situate the needle to stitch an exquisitely tiny and precise distance from that edge, while at the same time it evenly turns down the larger hem allowance – all without pre-pressing or pinning. 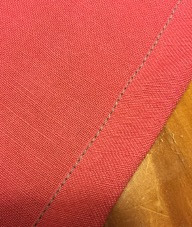 The adjustable hemmer can be used to machine stitch down hems of a variety of widths without the need to press or pin first.

How it works:
The adjustable hemmer can be used with the measuring ruler engaged to fold under and stitch hems from 1/8” to 1” . 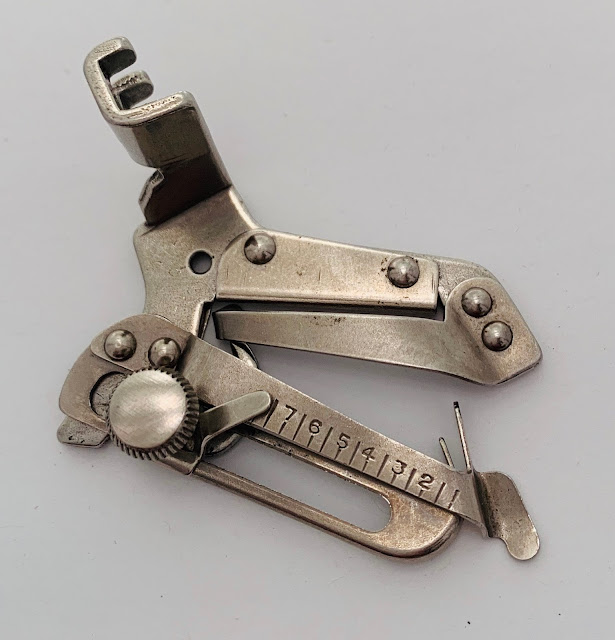 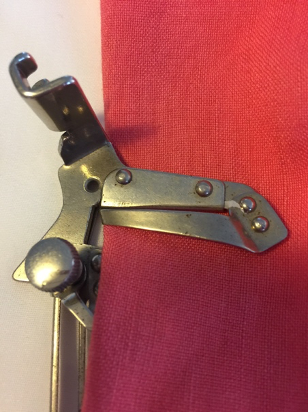 With the measuring ruler moved to the left and front, possible when the screw that attaches it is loosened, the adjustable hemmer can also be used to stitch down much wider hems, although the hem allowance will need to be turned under and pressed. The hemmer will then only turn under and stitch the raw edge of the hem allowance. Below the measuring gauge, which controls hem depth, has been moved out of the way so only the hem edge will be folded. 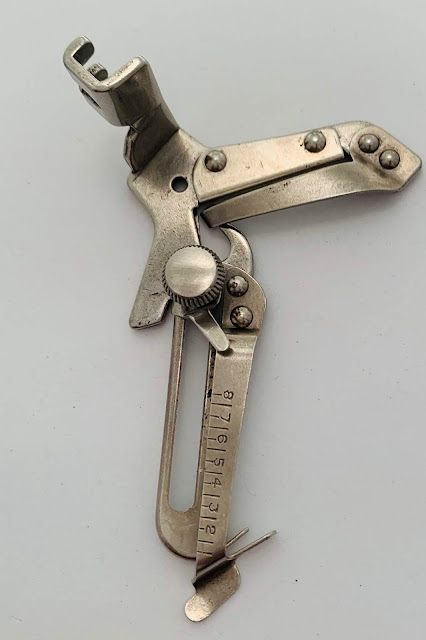 Tricks for using it:

Understanding how the numbers on the measuring scale work can be a bit tricky. The large screw clearly seen on the gauge can be loosened to move, and then set metal pointer to any number on the scale. Each of these numbers corresponds to a finished hem depth: