I woke up this week on Monday and decided it was time I took some time to sew for myself.

Things have gotten a bit thin in the practical clothing department - a combination of a lot of quality time spent sewing for family and a combination of the influence of that stupid Kondo book (my apologies to anyone who thinks it is not stupid - just reflecting on my own situation) which has meant that every time I remember some odd garment that would be perfect for an odd occasion, I realize I have decluttered it out of life.

A person who saves things just in case is really swimming upstream these days. With both my daughter and one of my sisters all into minimalism and decluttering I have been talked into saying real dumb things to myself like "have a worn this in the last year?" before throwing them out.

Any realistic person, particularly one who sews, will tell you that not having worn something for a year is a completely meaningless criterion.

Reasons that a person might not have worn something for 12 months might include:
Well none of the above are good reasons to kiss any garment goodbye and send it on it's way thanking it for its service.

Although right now if I could get some things back from Value Village like that blue blouse that had a FBA and really fit or that Persian Lamb coat I might kiss them then.

All of this is to explain why I woke up this Monday morning and said "my turn."

So for most of this week when I wasn't working or being semi responsible or dog walking I cut out a bunch of projects, all things I need for the immediate future which next month is going to include state parking it to Texas and back.

Little explanation on the state parks and my husband.

Although the rv is pretty comfortable my spouse is an out in the woods versus a rv park with golf carts kind of guy.

I like this myself, apart from the coyote sauntering past me sewing at the picnic table part, but it has very specific wardrobe requirements. Like warm clothes for when the propane runs out, or sort of publicly decent housecoats for going to the bath house for a shower because the hot water has run out because, well see above.

So I kind of let everything slide this week except cutting out. This is what I have on the table now:

4 pairs of knit jogger/sweatpants
2 pairs of linen wide legged pull-on pants
1 housecoat (that's what you call them in Canada. A lounger? bathrobe?) with a zipper to go in it
9 tee shirts
1 sort of sweater coat thing in really cool speckled jogging fleece
3 pullover Lovenotions Constellation tops
8 pairs of underwear because I had a lot of scraps and well that propane thing
I pair of knit pyjamas in a style that a six year old would wear in a snowflake print I was hoping to use up at Christmas

Of course I have a list too of things to make for other people, including an apron for a florist one of my other sisters works with, but my plan is to try to get as much of this done as I can over the next few weeks, and pack the rest up for finishing on the road, we leave on February 15th.

When all of this utility sewing is done I will turn my attention to a hopefully more interesting spring wardrobe. Right now though I am sort of looking forward to just getting some new things to wear for real life.

In the meantime I will post a picture of what is in front of me now, my daughter's dog Reggie. I am sort of the designated dog sitter around here, Reggie and even my newly single long ago first husband's dog, because I like the dog.

Reggie is the biggest character though.

If you make eye contact he comes and sits on you, all 80 pounds and more or less you need a crane or another person to get him off, because he sure likes laps.

He also eats whatever isn't nailed down. This starts conversations around here like

"Belt. Do you think I can leave my clothes for work laid out, even the belt. No you are right maybe not the belt. Better put it up somewhere high."

Last time we had him he ate three pounds of butter and one pie, although he is a very neat eater.

So far his personal best is an entire pineapple including the green leaves at the top.

Not any dog can do that. 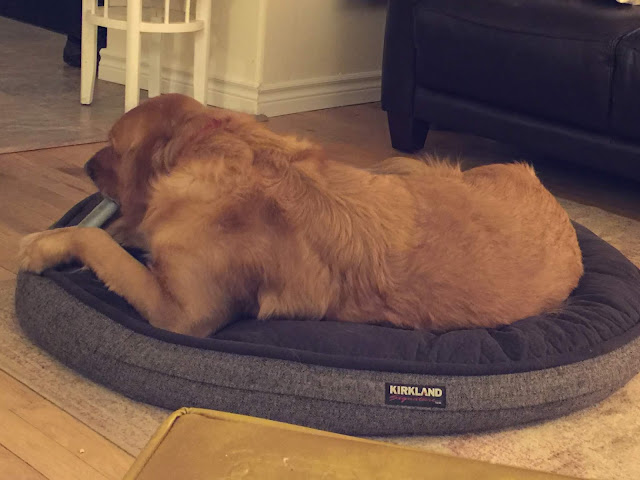 Probably resting up or at least digesting something.

He has to pace himself. I guess we all do.