I have had a nice day on the picnic table and have the pockets on in my beta test jeans, etc. and tomorrow am doing the fly. Remember I am doing this blind, without instructions, which is fine with a few mysteries.

To refresh that memory I have been doing some surfing and pretty much have turned up about 47 versions of the mock fly.

When you want old school, you go old school and refer to those who knew the Right Way to do things.

In this case I have found in the Digital Commons (where many university libraries use to upload archival materials or university research projects) of the University of Nebraska, Lincoln  Extension, these marvellous instructions for three kinds of fly zipper instructions. Save these instructions, they are like gold.

I think we are losing a precious resource here.

In previous generations home economists took their work pretty seriously. Historically there was an argument to be made that as women became more educated, and vast numbers of them became empowered working out of the home during WW II, that it became necessary to find a socially acceptable (read this home based) way for women to use their brains and become professional and that fostered the development of Home Ec degrees.

I have written about this before.

In some cases this got a bit silly at times, here is something I read from the same archival collection, about scientific kitchen organization: 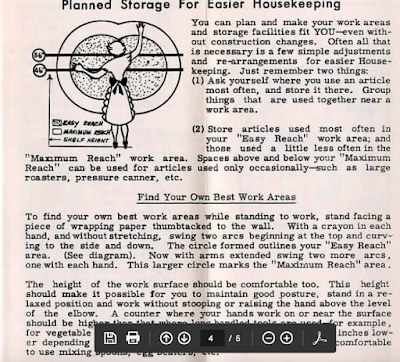 Now although this sort of stuff above was a waste of good woman time, I really regret all the good sewing knowledge that is now archived and lost.

I think of what was known, that is now not -  leaving bloggers, new and old sewers to flounder, and too often to hack together methods without the benefit of good solid knowledge.

If I had an endowment and decided to do a nutty retirement project I might just start visiting these archives in the old RV and pulling these materials together for sewers today.

Some excellent minds put their effort, their careers and some times their lives into creating this knowledge.

We shouldn't let it slip away.

And now we are finishing seams

Not sure how this jeans project is going to go, since I was asked if I wanted a translation of the instructions and being a smarty pants said no of course not.

And now being too proud to admit I am not as smart as I think I am, am turning my old jeans inside out to figure this out.

One thing I do know is that I need to finish the edges before I go further.

Last year I bought a completely unused old Hobbylock Pfaff serger that was put on the market in the early days when zero went into the user friendly part. This, I am sure, is why this particularly tight, nice, 100% metal, built like tank unit, was left in the box by the previous owner. 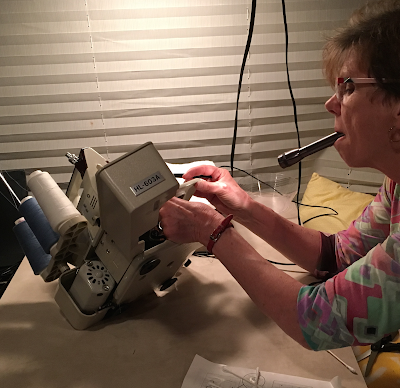 It is no piece of cake to thread. Not even a piece of anything.

An illustration is me with a flashlight in my mouth and the tweezers my husband hides for emergency uni-brow repairs in my hand threading it.

I can't believe, BTW, that I left the country without interfacing with me.

I mean who does that?

I decided to use a light weight denim since the boyfriend jeans have rolled bottoms, and I am making them for my spring and summer with the Jokers, my collective name for the three grandchildren at home. But now I think the waistband might be sort of flimsy.

Such a worry. But I am sure I can find something stiff around the RV to use ...

Just because it isn't interfacing doesn't mean it can become interfacing.

Yes the jeans are being cut out as you read this

Evidence of eccentricity, lots of that going around here:

Cut her out flat and make 'er round

About a million years ago I lived in Melbourne and worked at RMIT.

The brothers each made a very competent pair of velvet pants as their first project.

These guys didn't say much. But after watching me lay out a pattern one turned to the other brother and said,

"No worries. You cut her out flat and make 'er round."

This comment has stuck with me all these years as I believe it nails the secret to good pattern making, and to the signature characteristics of a good pattern.

You see fabric is flat but people are round.

To make the flat fit the round and all the round aboutness requires seams and details that are not themselves straight or flat. It also requires larger areas to be broken up into sections, or by things like seams and darts so the flat fabric can shape around the terrain. This is why a two piece sleeve hangs better than a one piece one, and why you don't get so many wrinkles and pulls in the upper chest in tops with darts.

So after decades of sewing so many patterns (I am a pattern motivated sewer) I have to tell you that just looking for these two things helps me identify a pattern that is more likely to fit (or be fitted with a few adjustments) than another:

1. There is curve to the seam lines where appropriate
2. There has not been any skimping on pattern pieces

New sewers in particular are too afraid of multiple pattern pieces. Remember those 3 or 5 easy pieces patterns the big four used to sell?

No amount of tweaking is going to change this.

Which brings me to Indie patterns.

I have a few on taxi-ing around the RV runway at the moment and I am not sure where to begin, based on the little I know and have observed above. Sewaholic and Stylearc I don't put in this category anymore - their patterns are too good and the drafting too fine.

But I was intending on making up the very famous Scout Tee from Grainline. I have the pattern and there have been a million versions made, about a million more hacks and countless blog posts written about how it has been tweaked to fit, often over multiple iterations.

I could use a decent pull over top in a woven for warmer weather.

But compare the Scout - front, back, sleeve and with Stylearc's Vicki top: 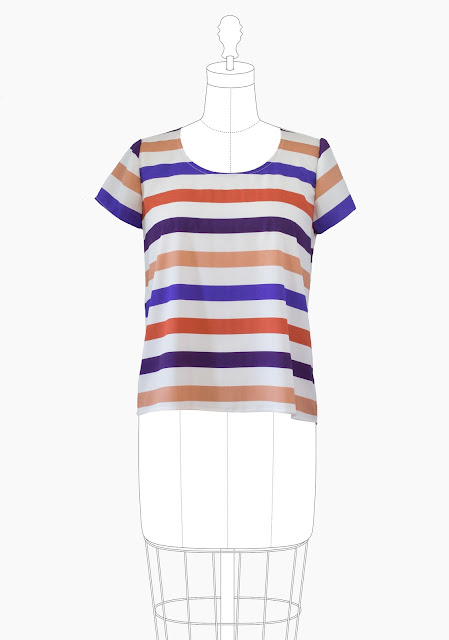 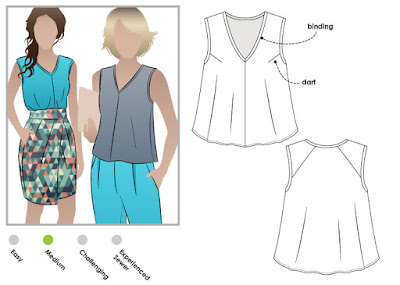 See what I mean?

The Vicki has a front seam that would allow for gaposis adjustments, a small front dart so you would still get a fit in the shoulders and room in the bust and in the back sort of raglan seams that could very easily be used to function as back neck darts if you needed them. This would fit your modern computer working (forward shoulders etc.) , bust having, woman.

In other words you could work from the stitching lines already in the Vicki to get a great fit without much effort or knowledge. But in the Scout you would have to add these things which would require some pattern drafting skill, and in a pattern meant for beginners, not the point.

Nearly every new sewer I have know who has thrown in the towel, or more often the sweated on garment thrown into the garbage, has done so because it just didn't fit or feel right.

All of this is an on ramp to the Bootstrap Boyfriend jeans pattern I am now in the process of assembling.

Here is a shot of the layout which should give you an idea of what already I think this pattern has potential: 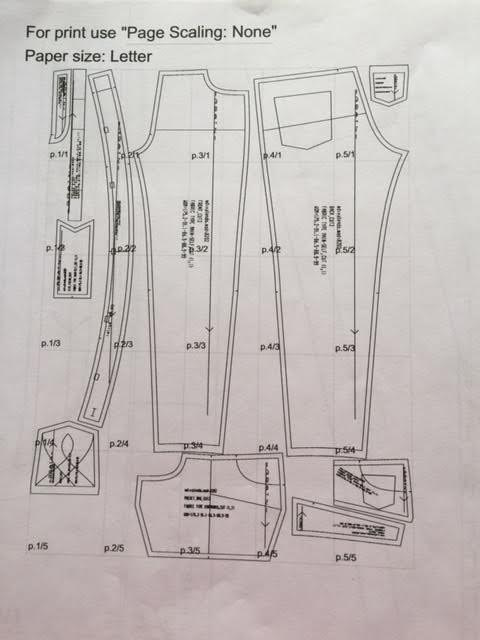 We will see how this sews up.

Here we go. Got a positive response from Stylearc on Mom jeans and in the meantime have just ordered Bootstrap's Boyfriend jeans pattern.

Let's see what we can make up in the old RV.

I have sworn for decades now that I was not ever going to bother making jeans, which I could buy. Then one morning I woke up and thought "I think I should make some jeans."

Every once in a while this happens to me as a sewer. Maybe why I can't ever do a SWAP. Maybe why I collect fabric and supplies. Never say never seems to be part of my sewing life.

What sewing course changes have you made recently?
Posted by Barbara at 9:42 AM 7 comments:

Great response back from Bootstrap

Hi folks. Excellent answer back from Bootstrap on the Vado jeans photo, now posted in comments in preceeding post. Since these folks are a start up I am definitely going to be seeing a pair of their jeans as soon as I source materials. Stay tuned.
Posted by Barbara at 9:14 AM 3 comments:

I have been working on finding a pattern for the jeans I am looking for.

Bootstrap patterns has a nice one here but I did notice, in all three of the Vado patterns illustrated that the jeans pictured were, I am pretty sure, RTW. You can see the label inserted in the right side seams if you look. This makes me hesitate. I mean if you were selling a jeans pattern wouldn't you use your own sample?

Am I wrong on this detail?

I also emailed Chloe at Stylearc, since there crotch curve is so excellent and she seemed interested. Watch that space.

Finally I was surprised and pleased to see this pattern from Butterick in my inbox today with a sale notice. Have never made Vogue pants with great success but I have some time on the picnic table for the next month and I have a power outlet on the side of the RV. Might be time to experiment before I go home to my busy life: 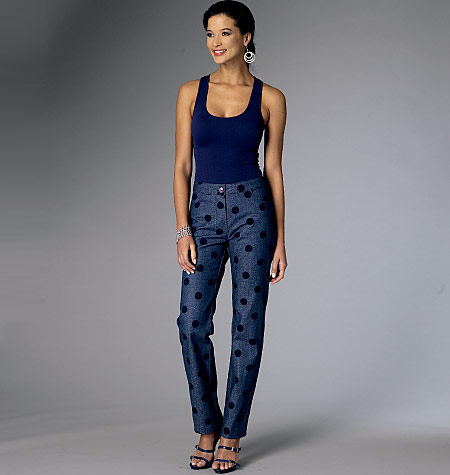