I haven't blogged for a bit because things have been active:


On the sewing front I have finished those 12 pairs of StyleArc Peta pants/capris/shorts.
I fully realize this is crazy but I am just so pleased I can make pants that fit that I couldn't stop. One of my sisters said to me, "where are you going to wear all those new pants?"
"Around," I said, "around."
It has to be the crotch curve and here that is:
I am currently involved in the usual paper stopping - mail re-routing - dog food buying - clothes packing jobs of getting ready to go away, which in my case also involves intensive discussions about how many machines and how much fabric to bring. This is where I am so far, piled up in the grandkid's room: 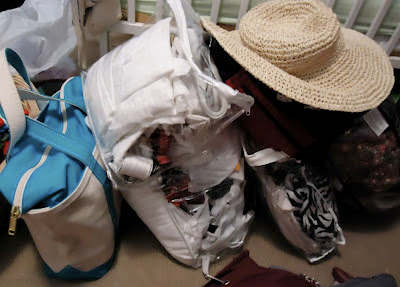 It is a delicate balance between enough to keep me busy and not so much that this stops feeling like a vacation. I am going to be with a golfing husband after all and Mr. Rascal, and have my daughter Misses Scarlett and Heidi and my son-in-law down for three weeks, and hopefully my mother-in-law and sister-in-law too.
I realize that for many people time away involves beaches and books and quiet time together but that's not just us. We have in fact never really had a holiday without family and I have never gone on a vacation without a sewing machine.
I have been thinking about this lately, seeing many early retirees around me, and have realized that my life is always going to be about an entourage, always going to be busy, always going to have sewing going on in it when a rational person would be doing something else.
And I will keep working, I like it.
I will tell you a story about work off site.
About a year ago I was on the road and teaching online. One night, just before I was due to go live with a class, we got stuck in one of those awful rush hour traffic jams on the Baltimore DC corridor. My husband is never late, always precise, and more or less was losing it with trying to get me to the hotel so I could use the wireless.
When it became clear that wasn't going to happen I looked around and noticed we were driving by some pretty fancy suburbs.
"Those folks all have to have wireless," I said "Take the next exit."
So I put on my headset, opened my laptop, and put it on my lap and we drove around until we picked up a signal.
So if you looked out your window a year ago and saw a car parked in front of your house and a stressed out man and a talking woman in it, that was just us, not some sneaky security firm.
I got my class taught without a hitch, went online two minutes before the start time.
The class was, coincidently, called "crisis communication."
Off to the dentist now.
Talk later.
Posted by Barbara at 7:38 AM 5 comments: