On colour, personal style and palettes

My ideas on this one are all over the place, what else is new, but I will start in the middle and work out.

I think we all go through life transitions when we wonder about our personal style and if and how it should be updated.

After all how you look on the outside reflects a lot of how you feel about yourself on the inside. In my experience when there is something of a match it's a good thing.

Hands up anyone who has looked at their clothes at some point and said this isn't who I am any more?

New mothers with work clothes, students going into the workforce, moving from the ranks to management, somebody's mommy to suddenly somebody's mother-in-law.

Of course at every stage there are undertows that seem to carry you along, and promise that will be in the right direction. Career basics - black, grey and that damned white shirt for example.

Age appropriate is a good one too, and kind of tricky when you don't actually feel one bit older.

Some of us, OK its me I am talking about, in fact feel as if we were the original hipster all along and a lot of folks are just now catching up.

You know, the sewing before it was cool crowd.

Which brings me to the expectation that black and grey loose clothes are sort of good taste. Timeless the word is, and I think this is probably true.

I figure the last oversized vest outfit in its own way documented that.

However I really am drawn to colour. Even when it's not particularly tasteful.

After all have you ever noticed that whenever someone says Gee you look nice today, it is nearly always the day you have on that red dress and almost never the day you are wearing a grey raincoat.

So despite the fact I have a bin of black and grey scraps I snagged at a designer's off cut sale, and have brought along to experiment with, I am still drawn to colour.

Case in point here, in an awful photograph with my most googley eye glasses on to catch the light, is a version of Stylearc's Blaire shirt.

I made this as a chapter garment for the chapter in my book that's about measuring and patterns - obvious I know but I am a literal sort of person. 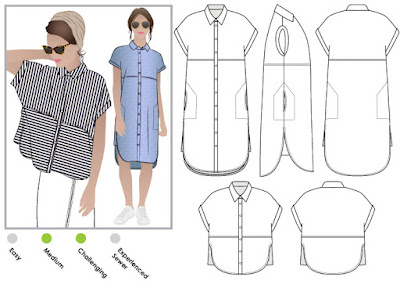 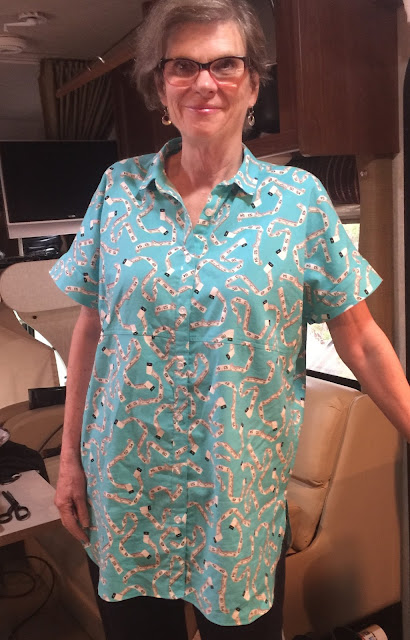 This is a really loose shirt, I made mine in a 10, down from the 12 my measurements would have indicated and I want you to know that I am completely aware it is kind of nutty.

But I laughed when I made it, and I laugh when I wear it, and it sure goes on and off fast when a person is trying on something she is sewing to check fit.

This one is sort of a sewer's Hawaiian shirt but since sewing is about as close as I get to feeling like Jimmy Buffet, it's perfect. 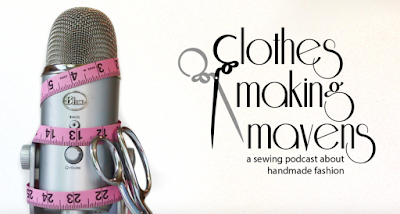 As some of you may know, and I think I mentioned earlier, I did a podcast interview over at the Clothesmaking Mavens a while ago.

The interview turned out to be sort of a spoken flypaper thoughts.

As a result of that experience Lori and Helena, the mavens, asked me to join them with a little contribution each podcast.

You can find the latest podcast, including my little bit recorded live in the rv from Austin Texas, while I had a cold, here.

Apparently I am now going to be one of the mavens, a development I never would have expected but isn't life interesting?
Posted by Barbara at 8:02 PM 1 comment:

Sewing a reversible unit to wear on top of leggings


As all of you in the American South know already it has been a cold winter. Not Nova Scotia cold, nowhere near it, but relatively speaking cooler than anticipated.

The trip down here, we left in January down the roads from the frozen North, was also pretty cold and I have been wearing my fleece lined leggings (thank you Mr. Costco 2 for $20) a lot.

The thing is that I am not usually much of a legging wearer generally.

I worry that I am past appropriate legging wearing age. And have wondered if I would look like so many of my students who have been wearing them as pants substitutes with tiny tops and so often look like there must be part of the outfit left at home.

As a consequence I don't have a lot of warm tops that are legging long enough, to cover the areas I have been working hard on with my husband's wonderful dinners and the appetite of a 14 year-old-boy that is one of my trademarks.

So in fit of utility sewing (I nearly never make something practical just because I need it) I decided to jump off a cliff and make something that I would not normally wear at all - a pullover vest unit thing.

I already had this Vogue pattern I had originally bought for the jacket (yet unrealized). 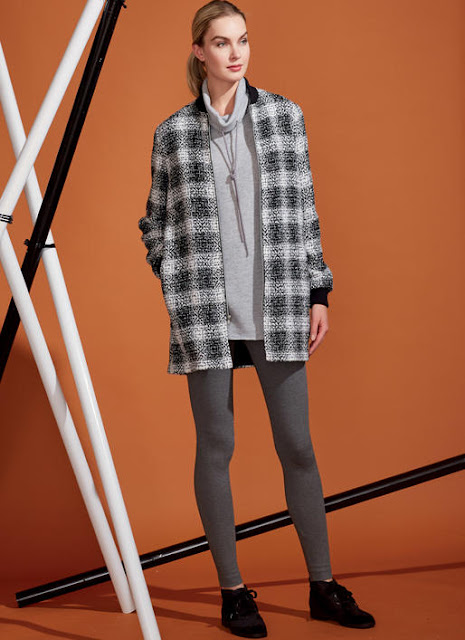 Since it was a set it also included this top and I thought well why not? It would cover the wide parts encased by leggings and would let me to use a variety of random turtlenecks and tops underneath for warmth: 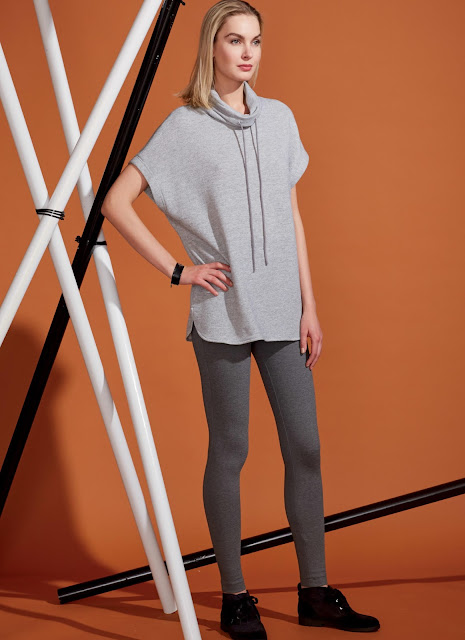 The fabric I used was a weird knit that was grey single knit jersey fused to some fake black suede. I got it  by the pound bin at G Street Fabrics in DC when I was there for a wedding in the fall. I actually ran out fabric shopping in one of those lulls you get in weddings while everyone takes pictures.

I had no idea what I was going to make from it at the time, but since there aren't any washing machines in state parks and because I struggle to stick to a carry-on when I fly, I got the great idea to make a reversible vest.

Nothing fancy of course.

I loaded up the serger on the picnic table with black thread and 4 thread serged up the shoulders and side seams, grey sides together. This gave me neat seams on the grey vest and I just straight stitched the serged seam allowances down on the black side.

For the raw edges of the hem, armholes, and neckline I serge finished them and then folded the black to the grey side and topstitched them all down.

Note the original pattern called for an attached cowl but I wanted to keep such a multi-use garment versatile. As a result I left that off and just made a cowl like ring to put around my neck from a remnant I found in another bin in another location.

Surprisingly I kind of like how this turned out.

I have cut out another one in red fleece for cold weather - I am aware we are going back up North again at some point.

And here we go.

The dress code in Texas state parks is not that defined and anything fits right in: 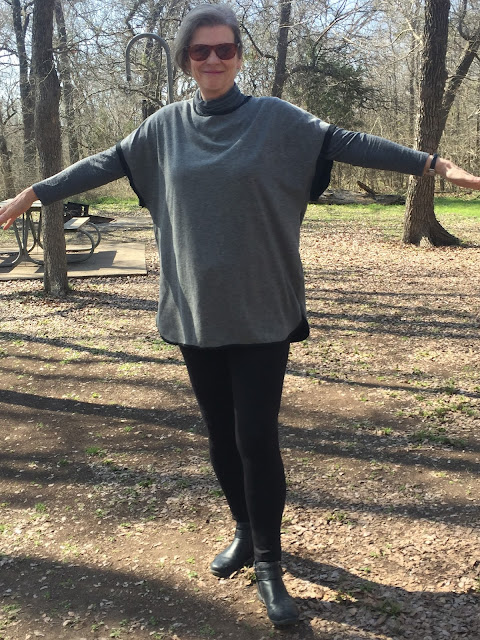 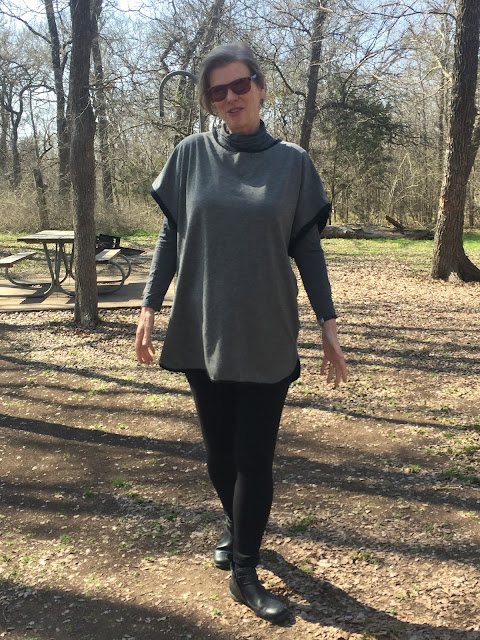 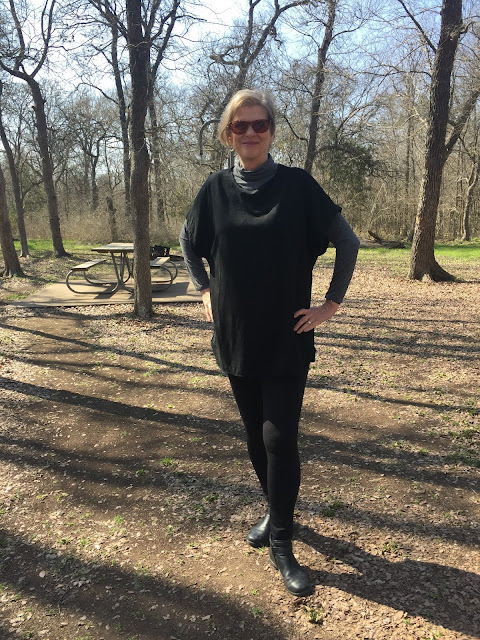 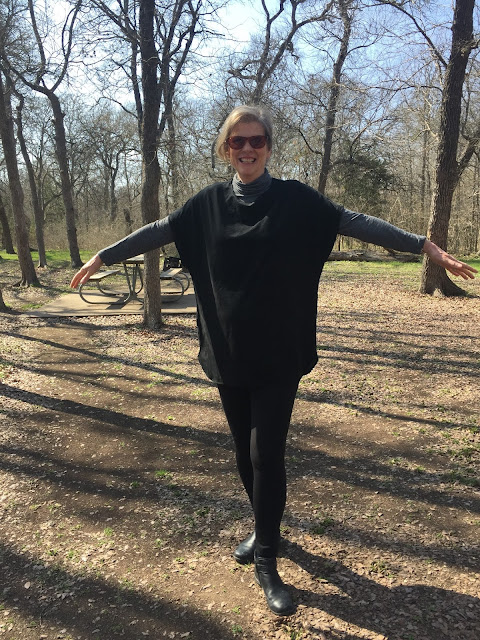 Email ThisBlogThis!Share to TwitterShare to FacebookShare to Pinterest
Labels: Vogue 9275

I am behind in my pattern reviews since I have been caught up happily sewing on the picnic table in the state park outside of Austin Texas. I am surrounded by quiet and trees, a few deer and this afternoon a coyote passed by. Not to worry I always have seam ripper handy.

I have been making a few knit tops and the first one, because I am low on basics, is a quick version of Jalie's Marie-Claude raglan pullover.

I have a lot to say about this pattern and about using/fitting Jalie patterns in general. 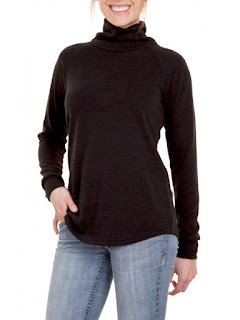 But before I start let's have a look at my top made in the turtle neck version. Note being a grandmother I wouldn't wear this with leggings alone normally but it does help you see the top. 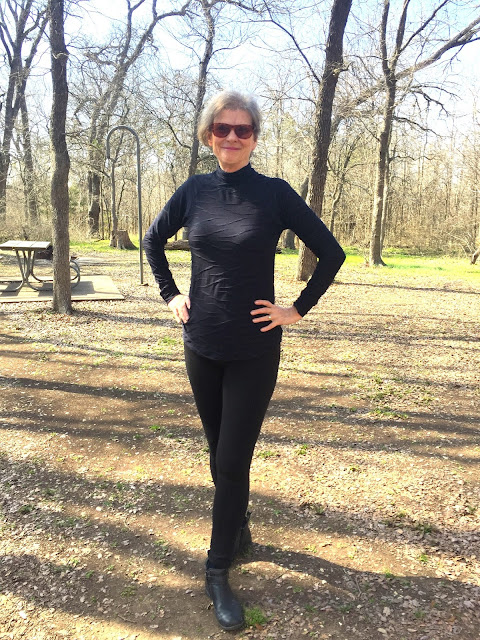 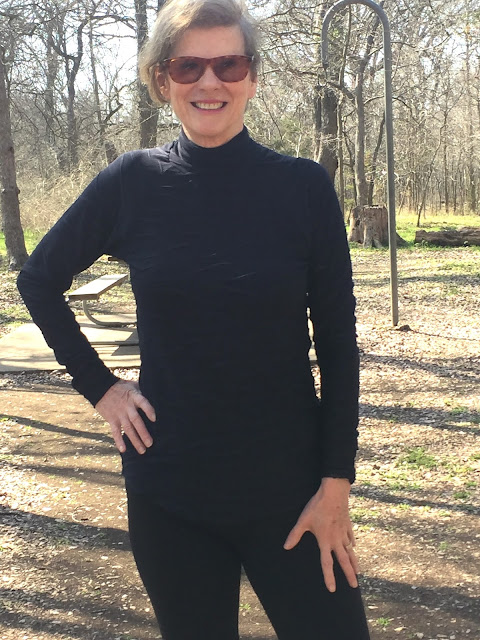 Now I know black shirts aren't too useful as far as seeing the details, but hopefully you can see how this top fits. I am tall and my husband's good cooking has collected around my middle, but I a fairly small boned. Loose garments, of the sort I have been playing around with lately, can really be too big around my shoulders - Jalie always gives me a good fit.

I admire the quality of the draft.

As an example of that here is the pattern piece for the turtle neck, the short sides are seamed together at the back neck. Notice how curved this piece is, to fit the round neckline and compare it to the straight up rectangle we see in most turtle neck collar pieces. 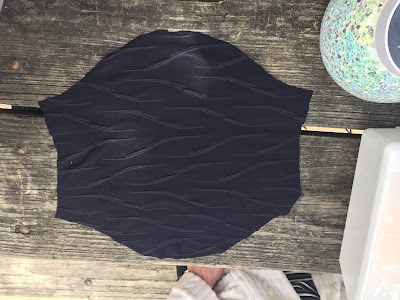 How can you not end up with a better fit around the neck with a collar like this?

That said Jalies have become my sort of TNT staples and I don't have one size I use.

I find that I can play around with the ease by tracing out a size larger or smaller depending on the fabric and on look I want.

For instance I have three different sizes of Jalie's pull-on pant I use (this is one of my favourite patterns because it has a loose leg shape but is trim in the hips and waist - not always usual for pull on pants, definitely not a clown pant look).

I cut out a smaller size when I make these pants in a knit, one size up when I have a fairly structured woven, like a cotton/linen, and one size up that I use to make looser summer pants in a washed linen or a soft cotton.

I feel the same way about this top.

This version, in this fabric a fairly firm poly knit I got at a designer's left over sale with a lot of bounce back when it is stretched. As a result it is quite fitted with a snug neck, sort of what I would call a base layer to wear under sweaters or cardigans.

To get a more of a pullover look in a sweater knit I will probably trace one size up, for looser sleeves and collar for instance.

In the meantime a fast and easy sew and a good basic I will use for years I think.