An op. ed. in praise of older sewing machines and finding them on ebay

First off this is a shot of one of the storage bunks in the old R.V.

Pretty normal looking. In my world at least.

(BTW I have only been here a week those swag numbers are going as soon as I develop some enthusiasm for sewing something other than clothes, which itself is iffy). 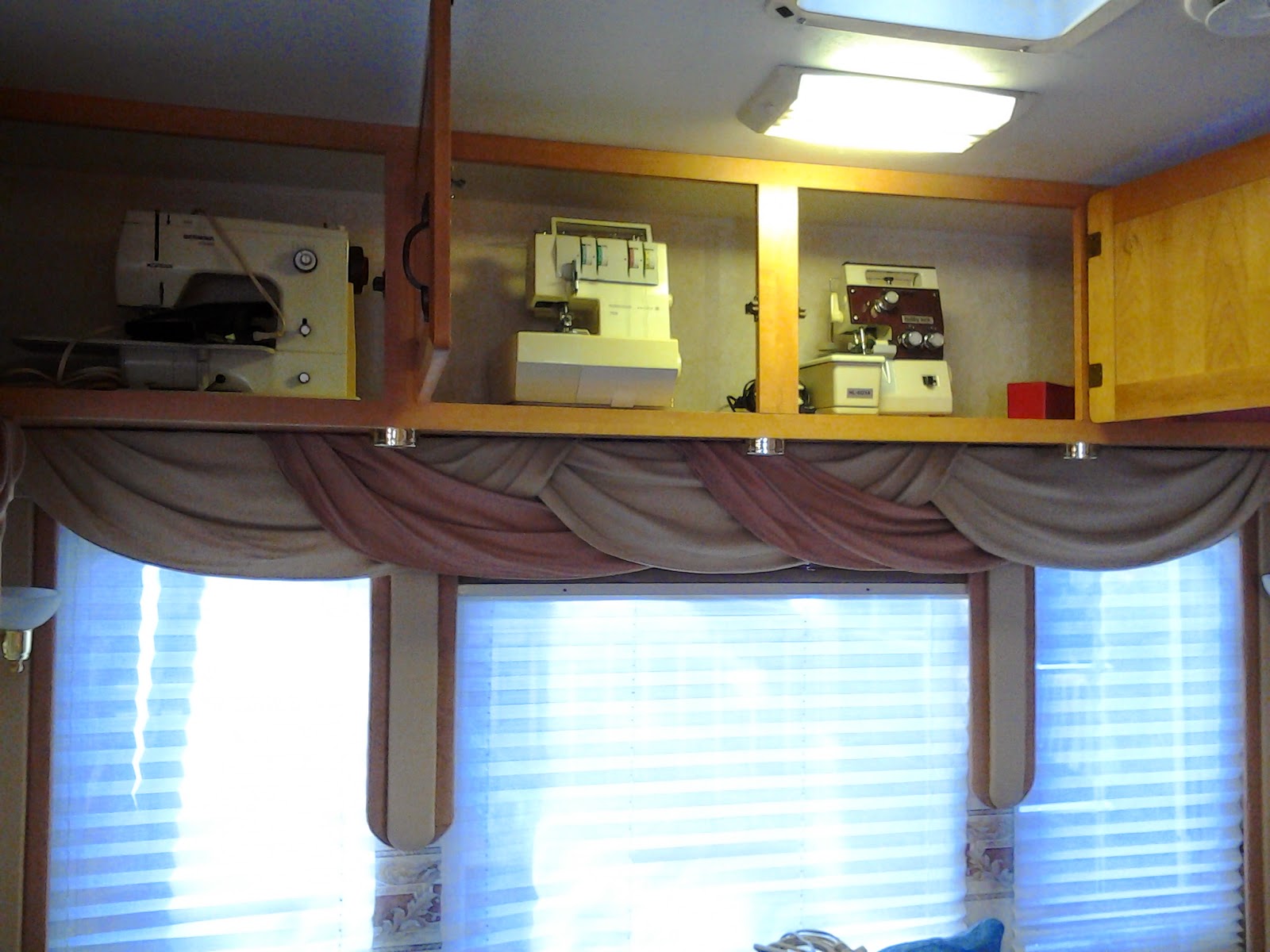 I have put the prices in here because I want to make the point that first class machines can be bought for reasonable money. The Bernina Sport is my main machine at home (I gave my Pfaff 7570 embroidery machine to my daughter, the Sport has a better straight stitch IMO and is so smooth). The 786 is going home to my daughter, the 603A (a three thread and has never been used, still has the styrofoam on it) and the Minimatic are going to stay here and wait for me to come down every year.

All are older machines, all were bought on eBay. All are first class machines and work impeccably. With some cleaning and lubricating done by me and the husband they have never had official service work since I bought them.

Now here's the op. ed. part (in the newspaper business an op ed is an opinion editorial which means its printed on the editorial page but was submitted, and the editors want to make sure you know it is just some nut's own ideas.)

These are my personal opinions on sewing machines bought second hand (I could write lots about that particular industry just let me know if you want more).

I worked once a very long time ago as a sort of free lance educational consultant for Pfaff and had a turn or two being a Vanna White to the service manager when he was doing technical training sessions. I picked up a few things.

So starting somewhere, probably in the middle and leaving some stuff out, here is how I go about finding a really good machine on eBay.

1. I only look for really strong mechanical (as in the parts are metal) older machines, made in Europe. The Germans and Swiss had great machinist traditions and good steel and excellent, although different hooks (the stuff under where the bobbin is).

I look for Pfaffs or Berninas for that reason and nothing newer than about 20 years or so. It helps to know the model numbers. Feel free to let me know if you have other ideas but I tend to go for a Bernina 700 or 800 series (be careful you are getting the older machines, they are recycling these numbers in newer machines to emulate the classics). You just can't beat that stitch IMO.

Pfaff also had some great mechanical models but you want to find one with the IDF, the built in walking foot that was Pfaff's claim to fame until the patent ran out a few years ago and other companies could use the idea (Janome for example).

Understand that some in a line like the Bernina Record 830 have great cache but that mechanically all machines in that line are the same inside, just a few features are different.

One Pfaff I like is the 6091, a strong basic machine about 20 years old that was their entry level with the built in dual feed.

For sergers I like the Pfaff 786 and 788, great machines with a neat feature like you just have to change the foot to go from an overlock to a rolled hem (why did they stop making that? So easy). I also like the early Bernettes by Bernina (all sergers were always made in the east, the best ones in Japan, some by Juki in those days, none were ever made in Europe) which has a swing foot which makes threading the needle a breeze. The older sergers can be less user friendly but are reliable.

I have to tell you I would avoid an Elna serger (if I taught a class these were absolutely always the fussy ones) but would consider an older Juki, they after all made and make so many of the industrial sergers and know what they are doing.


2. I would never buy an kind of computerized machine sight unseen. If there are any issues with those machines you have to replace the boards (easy to do they generally snap in and out) but many of those boards just aren't being made anymore or if you can find one can be more expensive than the machine.

3. I tend to favour sellers who look like they are doing estate type sales (you can pick this up by what else they are selling), sometimes a dealer has a trade they oil up, replace the needle and post it and charge too much. Don't panic if they say the foot pedal is lost or the foot is missing. These are generally pretty easy to find at a good price on ebay and usually mean the machine was left aside rather than worked to death. (I basically got my Sport as a body only and assembled the missing parts and came in about half what the complete machine would have cost me).

That said it is interesting to see what they offer with the machine. Original box can be a good sign, as is the original manual.

4. What to look for when you have the machine. Well these are all very good, but precise, strong machines and assuming the electricals are all right the main issue is that they may be stiff because they are dry. The rule is to oil, just a bit but often, parts where metal moves against metal. Open it up, Bernina is easy for this, and apply the oil where they have little red dots and where metal is moving on metal, including the hook in the bobbin. And of course put in a new needle.

My strong recommendation is to go online and buy a service manual for the machine you have bought (usually about $10-15 ) and follow the instructions carefully for opening up the machine and oiling and cleaning it.

There are two things you should never do:

Finally know when you need professional help. Although I believe you need this less than you think (most service jobs are about needle changing and oiling to be truthful) you absolutely need someone with the right gauges to fix timing.

Timing means that the parts have to move in the right sequence at high speeds with just passing each other exactly where they are supposed to can do that without crashing into each other. If they crash that means the timing is off and everything has to be loosened up, parts that are broken and bent replaced, and set up with the right measurements between the parts so it won't happen again. (You see how technical I am).

You know you have a timing problem (most common in sergers) if you see and hear pieces hitting each other, things stop.

You are most likely to have timing problems if a machine has bent needles or, tellingly in sewing machines, scratches along the throat plate, usually from someone "helping the machine along" or trying to keep going through too many layers.

Bottom line the best machines may be the least expensive if your think about it.

Disclaimer to this op. ed.:

Of course there are many good new machines out there but let's face it if you all you want is a nice sewing machine with a beautiful stitch and can live without needle down, thread cutters and embroidery stitches, they are out there.

With working remote from the RV and doing the other Florida things I am not getting to the laptop to blog in a way that keeps up with my random sewing thoughts.

With that in mind I set up a twitter account this morning for my sewing thoughts, originally called BarbaraEmodi since that is my name. Should serve to confuse all professional interests which will probably be good for them.

Basically I am going to use this to record ongoing flypaper thoughts so line up your expectations accordingly.