Finding your style series part one: Life is not a funeral and the neutral dilemma

Well remember when I did a hemming knits series?

I really enjoyed doing that but even more I enjoyed the comments.

I like this blog best when it is a discussion, not a presentation.

So before I do a series on hand stitches, and I am still going to do that, I thought it would be interesting to open up the floor to a discussion of finding your style.

This is an issue a lot of women think about a lot.

People who are thinking about their personal style, in my opinion, have just had one of these life experiences:


Women start to think about personal style when they suspect they don't have any.

Real style that is.

I have been reading, as we all have, a lot of wardrobing and style advice.

My idea right now is that we consider, on a large and philosophical level, some of the big ideas in the style advising world, kick them around and explore what isn't and is true.

How does that sound to you?

To start with I want to talk about a central concept.

And that is that every wardrobe, every plan of a bunch of clothes that express your own personal style, begin with some neutral basics.

As a common sense approach neutrals make a lot of common sense. Here, in my view, are those sensible ideas:

1. Economic. If you want to save money and cover the something to wear to a lot of events territory, then neutrals will do that. I know when I worked a fairly dressed up job my two black skirts and two black pants were worn in some incarnation nearly every day. No one in human history has ever said "Hey aren't those the same black pants you wore just Tuesday this week?"

You wear the same orange mohair sweater three times a week for six months and someone is going to say something eventually, guaranteed, as in "Gee you sure must like that sweater (I sure don't)."

2. The neutrals go with everything, assuming you can contain yourself to some sort of a colour family. Navy, grey, brown, beige, black. Except for navy which is sort of its own territory reserved for the navy I guess, most neutrals can even be extended into neutral pairs, black and grey, beige and brown. In this case the neutral even can go with itself. Economic and practical.

Mind boggling in its efficiency.

3. A lot of neutrals, particularly those that go with themselves or something nearly like itself, really reduces dressing thought. Put it on, it goes with everything, and no one will remember it anyway. Men have this down pat. Maybe twice a year a man might think "navy suit or grey suit" and his wardrobe plotting is done for the rest of that calendar year. If you are too tired or too busy or too thinking about more important things than clothes neutrals take the pressure off.

In general taking the pressure off IMO should always be a major life aim.

4. Neutrals are classy. We are back here to that orange mohair sweater. Neutrals are elegant. Monochromatic neutral outfits are dignified in particular and always appropriate. The same cannot be said for clown pants for example. And since pretty well no one I know, myself comes to mind, are really on the inside all that elegant, dignified, or always appropriate, it surely is helpful to have clothes disguise you out in these areas.

Now all of this leads us naturally to press conferences.

In my other life, one of my several other lives, I had to go online and watch a press conference on the local news so I could comment on it.

I can't show you the whole panorama but here is a small part of the view of the folks on stage: 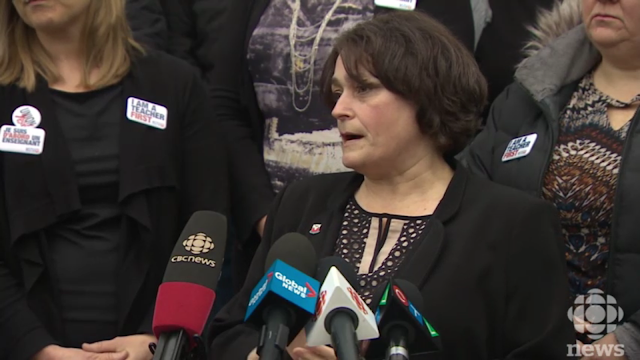 Now there were about 40 people there and remarkably every single one of them was wearing black, all or mostly.

This is in Nova Scotia in February which is itself pretty dark and depressing to the point that folks either end up in RVs down south or are sitting at the kitchen table in front of seasonal affective disorder lights (I sold mine on Kijji when we decided to go south in the winters and spent the money on fabric).

I looked at this press conference and thought, well life isn't a funeral and maybe this whole neutral thing has got out of hand.

Really it as enough to make this girl go put on this top made out of some nice poplin bought in New York at one of this tiny shops that sadly is now out of business. The pattern Stylearc's Maggie Shirt

So my questions to you for tonight is this:

How important to defining a personal style and building a wardrobe to reflect it are neutral colours. Do you think you have to pick one, or two?

Is your position on neutrals settling in or changing?

What advice would you give anyone on the subject of neutrals?

If you live in Canada, as I do, the word cardigan makes you think of something thick and probably pilled that you wrap up in because you are freezing.

Everyone needs a couple of cardigans like that, hanging over the back of the office chair, on a hook near the back door.

But cardigans, done right, can be a pretty classy layering piece, every bit as finished as a jacket when you are a situation where one is required, or you want to look classy when one isn't.

The idea is a twin set, a shell with a matching jacket underneath. As a concept I love twin sets but the boxy just below the waist traditional teams just don't flatter me at all.

I am long and need something longer to feel covered.

But I still wanted to make something twin set-esque and I  had this pattern, Jalie 3248 for a while now: 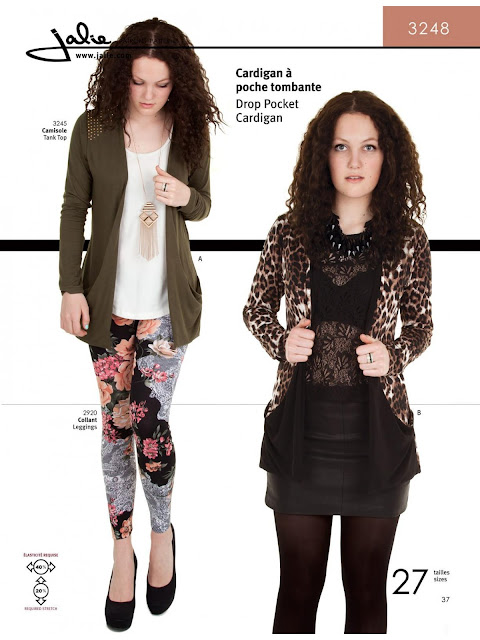 Interestingly the pattern description says it is meant to be worn over a shell or tank. It makes sense to pay attention to this description.

This is not your cozy winter cardigan.

The fronts are not meant to meet at all and the sleeves (widen them from the elbow down if you want more room) are narrow, too narrow for a sleeve underneath.

That said for a little something to have on over a shell or tank it is perfect, just perfect.

There is a real place for that little extra something, once the weather warms up. But best of all to me is that this cardigan can add the functionality of real pockets to a summer top.

If the fabric is light enough, this  cardigan is a way of adding pockets without a lot of warmth and weight - I'm thinking of taking your phone with you when you walk on the beach, carrying poop bags when you walk the dog, having your car keys and debit card when you run into the store.

That kind of pockety thing.

So here we go, beautifully shot and styled in the inside of the RV because it started to rain outside. 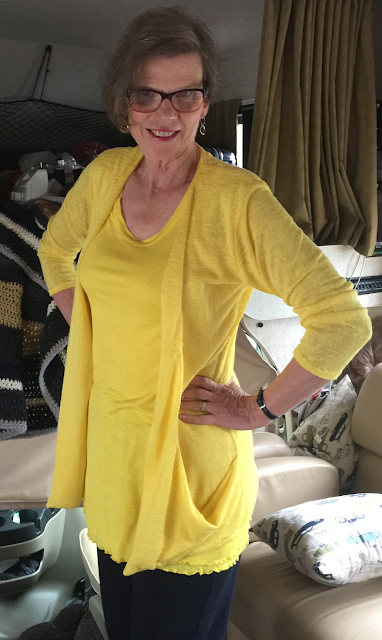 The shell underneath was made out of an old T shirt pattern I lengthened. Because the rayon knit was so thin I double fronted it and lettuce trimmed the hems by stretching as I rolled hem on my serger.

The cardigan was made from the same colour of a heavier knit, still very light, but with a lot more texture - one of those slub knits that you never know what you can make with it.

I was pretty concerned actually that even this slub knit was too flimsy to really hold a cardigan shape. That was one reason I chose the dropped cardigan pattern.

The fronts are doubled - that's how the the pockets are made, pretty nifty technique as are so many of Jalie's pockets - so that added enough weight to hold the shape of the front edge. 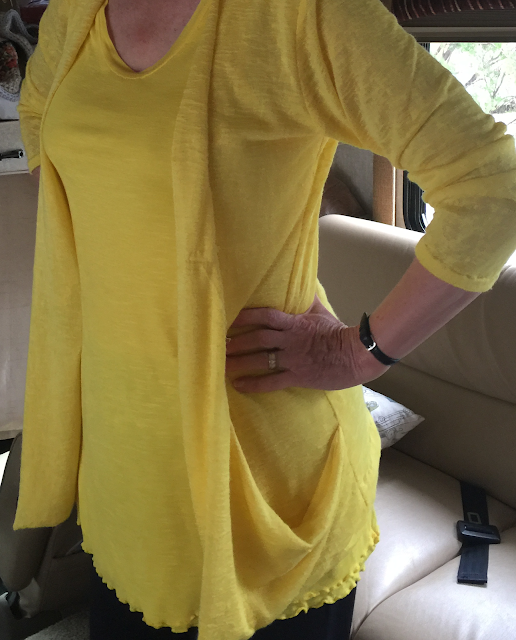 I was so happy with this set I put it in my book - bright I know - but who doesn't need cheerful?

I have another version of this at home - will show you that one when I get back - and I wish I had brought that set with me too for the trip, very useful.

And I am definitely going to make myself another one in white for summer too - there are many times when I walk a beach and need a place for my debit card, my keys, my phone and of course Daisy's little bags.
Posted by Barbara at 10:26 PM 9 comments: