An interview with Create Whimsy

Last week I did another interview for the Create Whimsy website. They asked me to talk about my new book, coming out next month, and so I did that.

For those of you who might be interested in the backstory on that book here's the link. 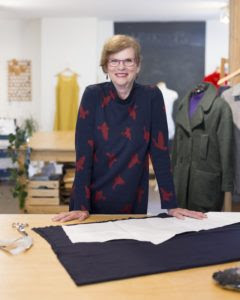 When Stylearc patterns first hit the scene I just about lost my mind. Up till then I had relied, with increasingly sporadic results, on the Big 4, most often Vogue.

At that time it was becoming obvious to me that the fashion universe Vogue was inhabiting was its own space, with things that they had decided were fashionable, but outside their world weren't.

Equally, and for concern to me as a sewist who really loves construction cleverness, was that the drafting at Vogue no longer seemed particularly good, and the instructions were pretty archaic.

In that environment, and from that perspective, Stylearc was just what I was looking for -RTW sizing, current styles and in some cases interesting construction techniques, although only cryptically explained.

And the pants fit.

Fit right out of the envelope and without any alterations necessary. Who could believe that such a thing was possible?

So I bought Stylearc patterns a lot.

Many of the early ones I collected in that period were even hand-drawn on nice tracing paper with hand-lettering. Probably going to be some sort of collector's items one day, but at the time patterns like this made me feel very strongly a personal connection to the folks who drafted them.

However over time styles changed. I found more and more of Stylearc's offerings were sort of shapeless. Loose fit, particularly around my scrawny shoulders, has never looked that good on me. For the same reason I never felt I could wear anything from the Sewing Workshop - those patterns always made me feel like a flag pole draped in a flag.

But then the next change was probably in me.

Maybe Covid sealed the deal but just being comfortable became a very large priority. Some of the new Stylearcs started to look pretty good to me.

So I jumped back in and it has been going very well.

The first thing I made were some Kew pants for one of my sisters. She has a hard time getting pants for her small waist, wider hips so I decided to make her some. We used a blue linen.

First here is the pattern: 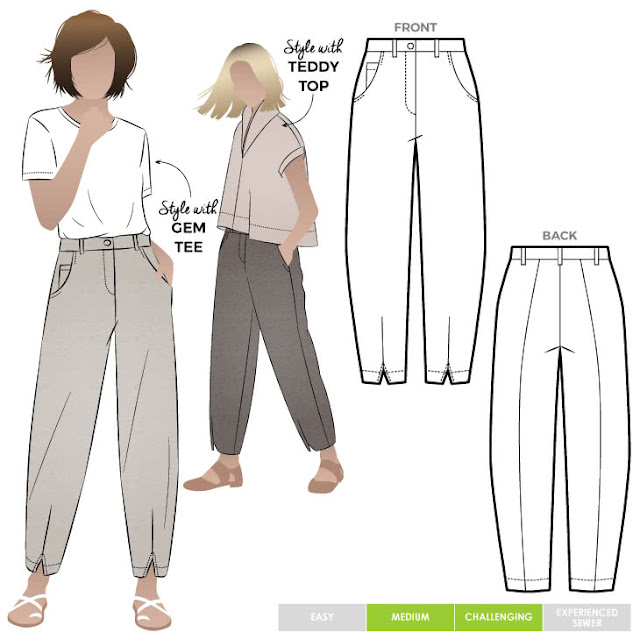 And here they are on my sister, in a video she texted me, with a note to ignore her hair. She has been a long lockdown in Ontario and couldn't get a hair appointment until next month.

She's pretty happy with these, and so am I so the next pair will be for me!

Finally I also made my grandson a housecoat as one of his birthday presents this week. One of my other sisters is staying with me while we wait for her daughter to give birth to her first child (the niece who lived with me for three years while she was in nursing school) and when we were out doing some thrift store shopping I picked up this nice polar fleece piece for $6.00
It just spoke "cozy housecoat for a little boy" to me so that's what I made with it.
Honestly it's great when they are at this unfussy age and anything you do is just what they wanted:

This is sort of my life. I am spending more than half the week this summer taking care of my three grandchildren here, and August 15 I am headed to Berkeley to see my youngest grandchild there.
Right now my sister and brother-in-law are staying in the semi apartment in our basement, so they are close to my niece who lives two streets over. You know the niece who is engaged (Covid delayed weddings) to my son-in-law's nephew.
Welcome to Nova Scotia.
There are more than enough folks to sew for around here. These include me and I will be sharing more of those makes soon.
Posted by Barbara at 5:49 PM 5 comments: