Handy sewing hint of the day #22

This one is about clipping.

Patterns tell you to clip a lot.

They don't really tell you why, how much, or how often.

Those are the important parts.

To make it plain as it can get I would say the thing to remember is you have to clip a seam allowance most of the time when it needs to be attached to some other shape that is different (say a curved neckline to a straight collar for example) or otherwise stretched in some way to liberate the fabric to go around a corner, in a insert as one case.

You don't clip seam allowances that are turned inside, when constructing a round pocket or a curved shaped collar as some examples. For that you need to notch, which is another thing all together, that I will talk about in the next post.

For now back to clipping.

This is what you need to know:

Here is an example which hopefully makes this all clearer.

A while ago I made a wool gabardine coat. The neckline was obviously round and the collar more or less a straight piece.

Common situation and you are there every time you yourself put a collar in a blouse.

You would also know that there is a tendency when the collar gets sewn into the neckline for there to be little pleaty things that annoyingly appear along the stitching line along the neck edge.

You are producing these little pleats you know by the simple task of trying to sew a straight thing to a round thing.

The solution is to turn that round edge into something straight so the two edges are the same in nature and will sew together naturally.

You get that curved edge to transform into a straight one by clipping. Here is what it looked like once had clipped the neckedge on that coat: 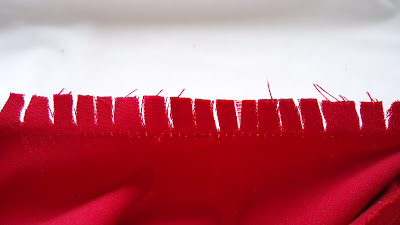 A lot more clips than you expected right?

True but look at how straight that seam line is, how large the spaces between the clips are - indicating to me how much this seam allowance had to be freed before it could be straight - in my mind representing in each of those spaces potential little pleats of fabric that could have been caught in the stitching line.

Email ThisBlogThis!Share to TwitterShare to FacebookShare to Pinterest
Labels: Handy sewing hint of the day, How to clip in sewing

Handy sewing hint of the day #21

I know I haven't done one of these in a while but it's time.

Today I want to talk about cutting.

The truth is most sewers are fairly ambivalent about cutting. Cutting out is the part of sewing most of us like least and most of us are also timid trimmers of seam allowances and other excess fabric.

I think this might go back to what I call the sturdy principle - the sense that if you trim too much and too close things might fray away and come apart after the first wash.

At all costs we are terrified of this happening and restitch, triple backstitch and disregard trimming instructions in the guide sheets whenever no one is looking.

We need to be braver. In sewing and probably a lot of other areas too. Hand made clothing tends to wear out before it falls apart in my experience and all that excess, should be cut off stuff, can really pack up behind the seams and make things just look lumpy. I have enough lumps of my own I always say, no need in adding any more extra.

So here's what I would say about trimming.

First thing is it's not about just cutting things down but doing the right kind of cutting in the right places. There are three main types of trimming to think about - grading, notching and clipping.

Today I will share a little bit about grading, and cover notching and clipping in the next few posts.

Grading is necessary when you have a seam that is going to lie close to the body and be well edge pressed and you need to both reduce bulk behind the stitching and avoid a pressed- in ridge.

To do this you trim one seam allowance down a bit and the other seam allowance about 1/8" even more than the first one. This will create a sort of step down between the two layers of seam allowances so they will blend into the fabric and make a less discernible ridge from the right side after pressing.

The rule is to have the longer trimmed seam allowance on the fabric layer that is on the outside, say the front of a blouse for example, and the slightly shorter one on the layer that is closest to the body.

Of course in some seams, for instance in a lapel where which layer is going to show on the outside is going to change, at the break point of the collar for instance, you would switch which is the longer trimmed layer too at this point.

Here is a gab collar on the pressing point showing the different widths of trimmed seam allowance. The wider seam allowance is next to the top of the collar: 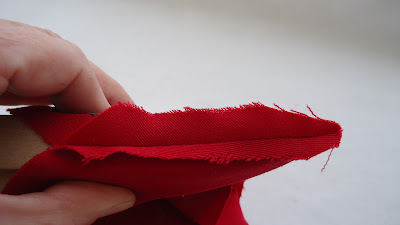 On vacation with the sisters 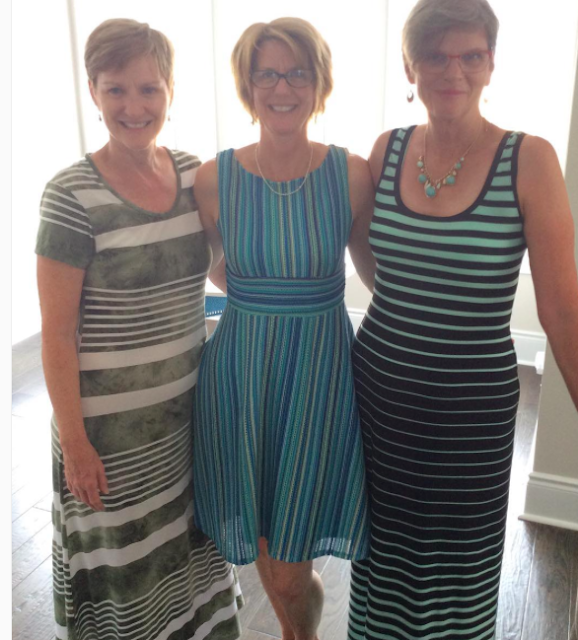 Just so you know I am thinking of you here is an update.

I am at Niagara-on-the-Lake, close to Niagara Falls with my sister Nancy (in the middle 8 years younger than me) and my mom and niece at Nancy's vacation home there. Yesterday my sister Dawn (the one on the other side of Nancy and 2 years younger) and her family came down from Ottawa and Toronto for a visit and this was shot of us together. Really no memo went out about everybody wears stripes.

The only sister missing is the youngest one at home in Winnipeg.

I am not sewing right now (but ordered a large number of patterns online last night thanks to the magic of iPhones and Paypal) but I am doing a lot of sewing planning. I have a real sewing intensive fall planned for myself and about time. Stay tuned on that one.

I will be here until Saturday and then back  home just in time to help Dawn's youngest daughter move into my basement - she is moving to Halifax to take nursing.

I figure you need a word to know where I have been, if in fact you have been wondering.

At the end of the day they can say she sewed and she had lots of family going on and that would be a pretty accurate summary of me.

These periods when you can't get near your sewing machine but are recharging your inner resources with conversations with people you love are excellent for sewing building up the old mojo.

This is a good thing because this fall I am intending on going deep on a few projects and garment types, more chasing the elusive favourite pattern.

Now off I go to teach my niece how to cast on.