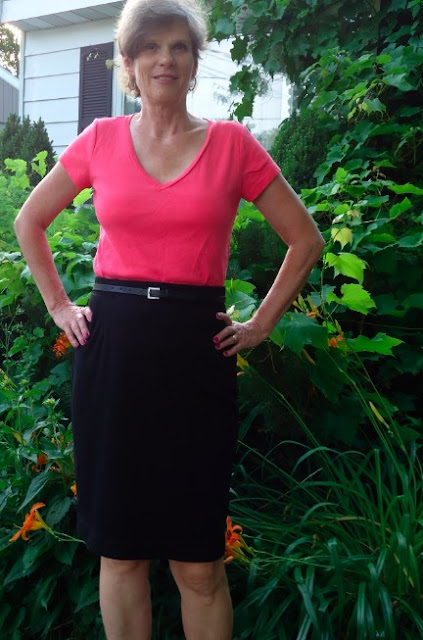 A couple of things.


No explanation necessary as to why this blog hasn't won any design awards.


First of all my apologies for the no make-up fact and wrinkly T-shirt. I actually think I started out with make-up but wore it off trying to get Mr. Rascal to drink out of the doggie water fountain thing we bought. I was trying to show him how it worked.


He needs to drink more but only likes running water.


Anyone want to come over to my house at 3:00 a.m. because there is a fox terrier standing in the bathtub waiting for someone to turn the tap on for him?


My photographic window of opportunity was short today - and I had to run to get it to happen - what with my photographer reading an extensive to-do list of things I have for him to do before he goes off to Goose Bay to be eaten by black flies.


This tour of duty should be much better I hope, black flies excepted, as he will be coming home every couple of weeks for at least a week. This should be enough sewing time without getting to the lonely on Sunday nights part too often.


So here is the Pamela Pattern's Magic Skirt. Two darts front and back, a pegged shape and a very slim waist so really it isn't apparent at all that this is an elastic waist skirt.


I made the high waisted version so I could wear a belt with it. I am always very amused by those photo shoots that show a belt just sitting on top of a skirt waist as if the first time you move that belt won't ride up and the skirt won't ride down and you will look completely waist disorganized.


Really this pattern is an A1 work skirt.


Since I have a couple of complicated many piece skirt patterns in the pattern pile I am considering detouring to a few more of these.


After all if it looks as good as, why not?


What really intrigues me is that this pattern says for stretch wovens too.


Now if that is true, ladies and gentlemen we may be in business.


Two of those units are getting cut out tonight and there are some Olympics on tomorrow.


Then I am going onto the cardigan which I am going to try and disguise as a suit top. I have been envying Carolyn's cardigans for years and this may be my year to come up with one.

Isn't it just wonderful when you find another TNT?

I am almost more or less recovered from being the owner of a beach cover-up instead of a summer dress.


Now all I need is a beach.


What I do know is that I need is a spacer project or two to restore my faith in myself as a garment making whiz - something that has not been particularly evident in the latest round of apron sewing, buttoned dress, shorty little number making.


I have to tell you though that that denim straight dress with all those buttons, Vogue 8800, actually survived a road test just fine. I had forgotten that denim does stretch on and driving to my meeting actually made it wearable without frightening the professionals by the time I arrived.


I need a sorbet, something to have between courses.


And fairly fast and gratifying and reliable I hope.


This means of course that the Claire Shaeffer latest Chanel jacket iteration is going to have to rest a little while longer in all its folded up pieces on the shelf.


I am getting pretty busy.


Despite the fact this was my 14th attempt to semi-retire,which I define as doing only exactly what I want when I want, too many incoming students and too few staff are sending me off to the front lines again for another academic year. My work is great, but sometimes I want less of it.


Maybe I will try again at this next year.


I decided today to sew up some easy suit things, since I am going to be back at the full time stuff. I cut up some knits I have on hand. I am thinking St. John in my head but we are probably going to get something closer to Target.


Not to worry don't we call those wearable muslins?


I cut out two of these skirts today, one black and one red, on Debbie Cook's recommendation: 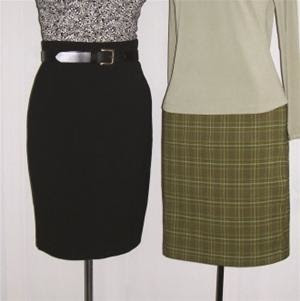 The Magic Skirt from Pamela's patterns.


Yes I know that I could probably draft something this basic myself, but to be honest to press yes on PayPal just seemed easier. If these work I know I will wear them a lot.


I had enough red to cut out a cardigan, and I used StyleArc's Cozy Cardi with the front cut back a bit because I am planning not having closures and getting a sort of Chanel lite thing going on with trim: 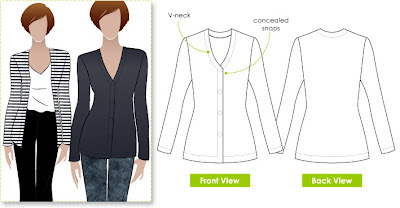 Last time I was delusional, seriously delusional, and thought I would start dressing my age and wear my pearls and a wardrobe of perfect little Chanel jackets, I acquired about 47 different 5 yard lots of cool trims. My feeling at the time, and I was in NYC, was that if I had trouble making up my mind I shouldn't and that it was best to buy them all.


It is time I used some of those trims up.


This of course was a similar approach used the time I was delusional before, and thought a person couldn't have too many white shirts.


You know where that ended up.


With 47 two and a half yard lengths of white fabric. Eventually I might have to go into the sheet business, but that's another story.


It might be a good idea to pause here and say that I know a lot of other sewers who have these delusions, but maybe cheaper ones. And of course my own personal opinion is that thinking you are going to sewing very ambitiously and charging ahead and tooling up way out of proportion, is not really delusional.


I would prefer to describe it as optimistic, flexible, and large minded.


In the meantime let's see if I can pull myself out of this quality slump with some suitette units.


Cross your fingers for me.

First off thanks for the useful comments on my Jodie.


Honestly. I am mad at myself.


I have been adding length onto garments since I was 12 so there was no excuse for this. I knew it would be short but didn't calculate the short side inserts and the sort of tail things.


And I don't wear clothes I can't bend over in. So beach for sure or I will get some of those cropped legging things and wear that underneath and feel nerdy.


Now onto big surprises which are the new fall Vogues.


However I really liked so many of these new patterns.


Here are my picks and annotations:


Now what grabbed your attention?
Posted by Barbara at 3:25 PM 6 comments:

Let's hope you brought your sense of humour

Well the Jodie jumper/dress is finished.

Took me a while because of 50 frantic students realizing that a summer course is only 6 weeks long, even though it contains a full term of 12 weeks of content, and that even if it is nice days outside, well time still marches on - and those due dates for major assignments can sneak up.

That's a summary, but I think you get the drift.

Of course in a live classroom you can look them in the eye and talk, but online they usually email you the hysterical questions, which have to be answered one by one.

Listen I love them, but I earn my money.

Next my husband's company announced they are shipping him off to some hydro-electric something in Goose Bay Labrador although they are promising to bring him home every couple of weeks regularly, which didn't happen when he was in Tennessee.

The thing is Tennessee had a nice Joann's and the Yarn Haven.

Now there have been moments when I have threatened that if they sent him off for the fourth winter running "I don't know what I will do."

Problem is I still don't.

So I had to take a few days to throw myself around and make clear that even though I have no real control over this latest round of going away, I am A Really Terrific Wife Who Really Everyone Should Appreciate.

So after I took a few days to do my throwing myself around and had clearly established my right to be buying a lot of online fabric, I pulled myself together and finished the Jodie Jumper.

As my students would say, and do. Too often.

I added a bit to the length and should have added a lot.

So I drove myself over to my daughter's, because I had some sewing machine looking to do over there (more on that tomorrow) with my camera.

When I walked in the door with the Jodie on the hanger she thought it was a Grow Bag, you know one of those baby sleeping bag things.

This was not, I figured, a great start.

It made me think that maybe I am too old for something called a Jodie.

Does StyleArc have a pattern called Darlene do you think? Or maybe Beverly?

How about a Joyce?

She agreed to take the pictures if I promised never to wear this out in public.

Except maybe as a beach cover-up or in Florida where people's bifocals are pretty steamed up anyway with the humidity.

We shot this down in her sewing room where the light is lousy but I wanted to stand beside her industrial sewing machine so you wouldn't think these pictures were a total loss.

Put your coffees down and take a look. 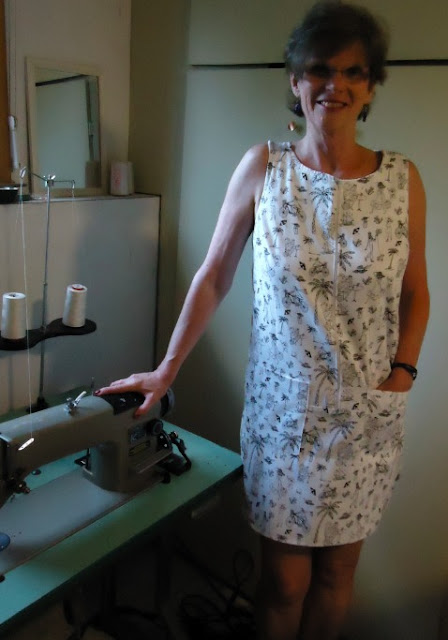 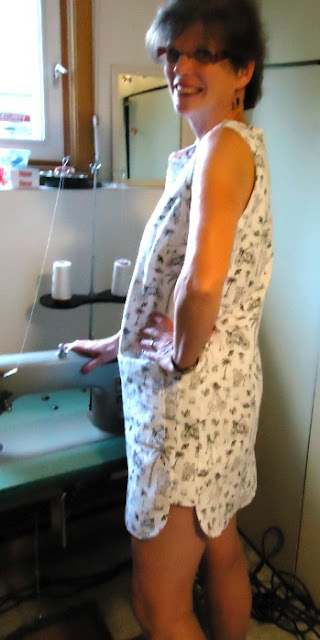 Yeah and the hair is sort of electric.

Now I have worked out some pattern instruction improvements that I will post if anyone is interested.

Just in case you have a need for an adult grow bag.

And I have not totally given up on this pattern. Being pretty weird is something I tend not to hold against anything or anyone and I figure if I add about a yard to the length I still might do a denim jumper one.

See you by the pool. Or down the basement.
Posted by Barbara at 8:48 PM 24 comments: