Catch up instalment one

My life has been exceptionally busy lately. I have been sewing a lot but going from one project to the next, a lot for my daughter and mother as well as Halloween costumes and birthday presents, without hardly stopping to take pictures or blog.

So I have a lot of catching up to do.

In the middle of it all, after about 45 years of always having a dog, we have acquired a kitten. Here she is: 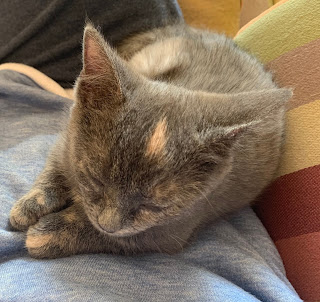 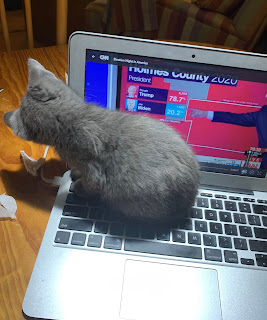 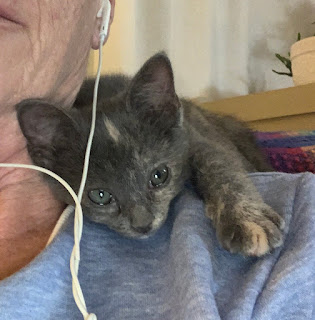 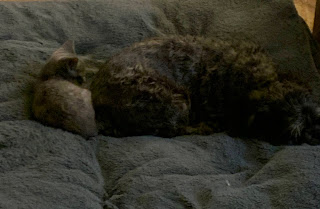 As you can see she is completely adorable and right in the middle of everything in our household. She was born in a barn, literally, and came to us with a bit of an infection but has recovered well. However she has tested positive for FIV, which is like AIDS in cats. I am hopeful that is just because she still has her poor mom's antibodies and she will be negative when she is tested again around 6 months. Not that it matters, we will take good care of her, now an indoor cat, with the help of our marvellous vet who also happens to be a friend of my middle son. We think she is wonderful.

Her name is Pepper.

She is now a member of our family. Daisy has given me a few "what were you thinking?" looks over the last few weeks but they have adjusted well. I think that Pepper is so well meaning that Daisy has just decided to accept her.

Maybe she understands this is another rescue.

On the sewing front one of the things I did was to make two pairs of red ponte pants. I swore I would never make red pants after I saw Anthony Weiner wearing them on the way to jail. But listen I had the fabric and some patterns I wanted to test drive. I am fairly over leggings, but wanted something that comfortable to wear with looser tops around the house.

For some reason I had acquired two almost identical patterns for ponte knit slim pants. They were the Stylearc Parker ponte pants: 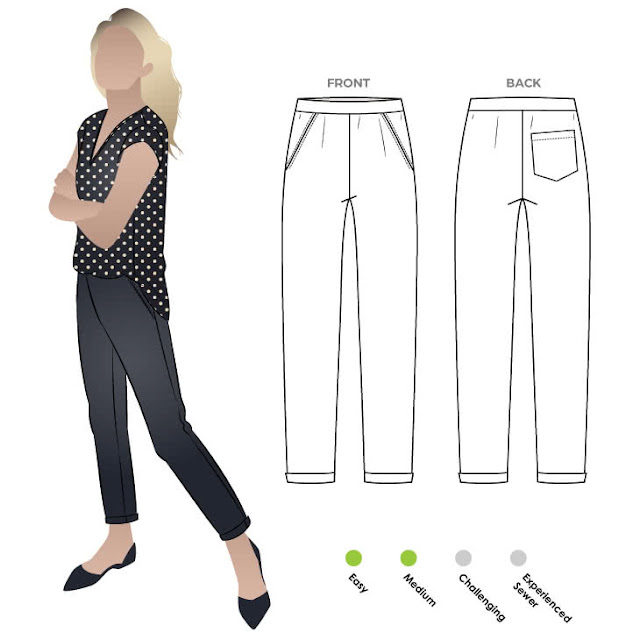 And the Jalie Renee ponte pant: 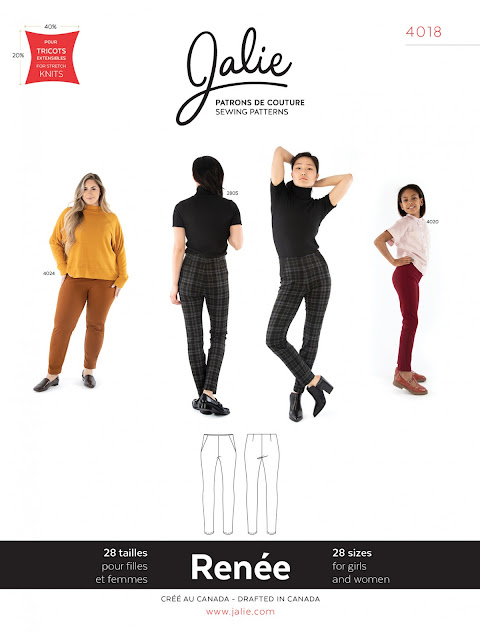 The Stylearc pant is cuffed (I didn't do that in my version because I was squeezing my fabric to get two pairs out of what I had) and the Jalie one isn't.

Remarkably they are nearly identical in fit. The Jalie only slightly wider in the leg, and have the exact same triangular insert piece at the front - sort of a shaping detail not a pocket.

Here they are on me. The Stylearc Parker: 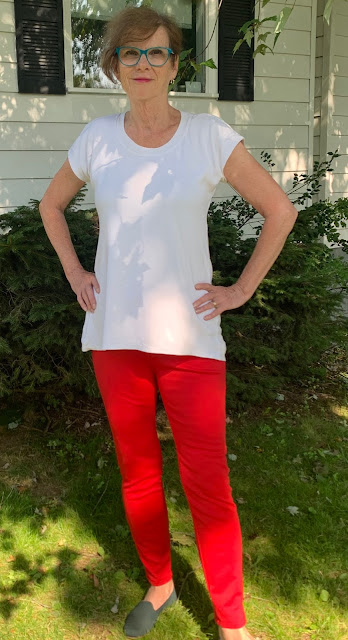 And the Jalie Renee: 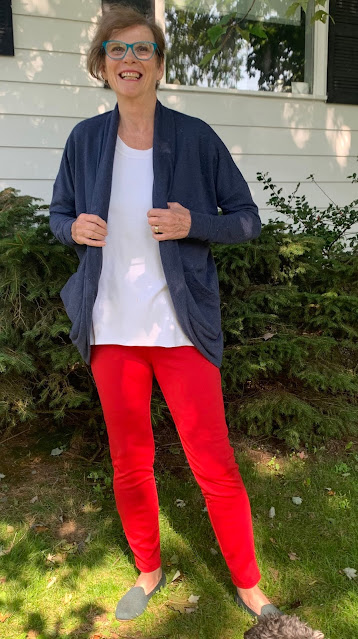 It's pretty hard to tell them apart isn't it?

There is one major difference though, and that's in the waist treatment. It's a difference that has a big impact on wearing comfort.

The Parker pants have a conventional elastic encased waistband, you can see the inset piece in this picture too: 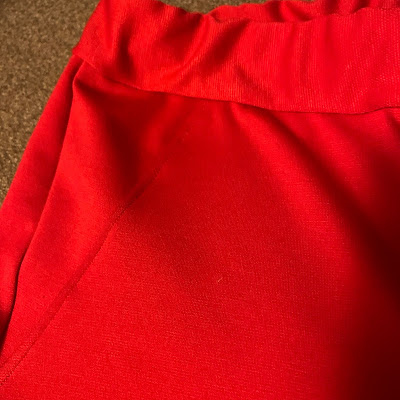 The Jalie Renee pants however go right up to the waist and the elastic is stitched to the top raw edge and then turned under and secured by some ditch stitching at each of the four seams (front, center and sides).

In the interests of science, and not vanity, I am going to share some non flattering pictures of my mature body in these pants, so you can see how this waist treatment sits. It's a good thing the internet is so private: 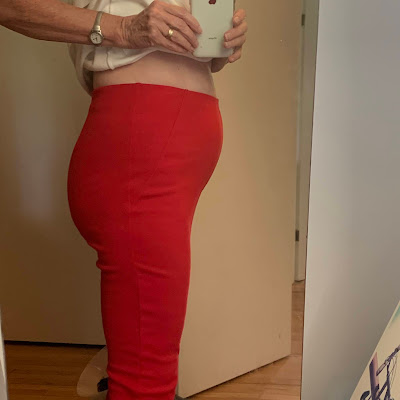 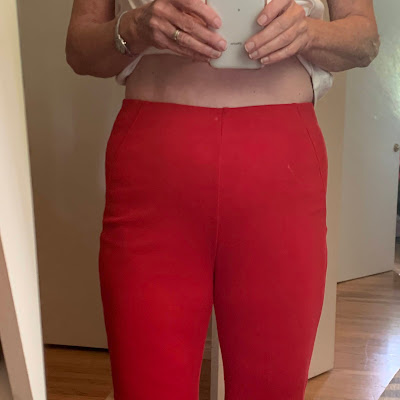 I just realized as I write this, that I am actually wearing these pants now. Even though the two pairs are virtually identical I find I always, always reach for the Renee version. They are just that much more comfortable. It is interesting to me how much nicer it is to wear a pair without a separate waistband.

Look for more catch up posts shortly, I have been sewing a lot!

I have some news.

One of my latest projects has been to do a video course for the Creative Spark online learning platform with my publisher C&T. This course is for any one with a sewing machine, of course you can use a serger/overlocker if you have one, but they are not required. In fact I demonstrate many techniques on my sewing machine and explain why in some instances I use my sewing machine even though I have both a serger and coverhem machine.

The link to my page and my course is here and this is a video describing the whole project.

I decided to do a small series, starting with this first course, on sewing with knits. This course is not of course geared towards folks who are already knit friendly, but for sewers who have what I call knit nervousness.

Specifically I am dedicating this one to my sister Dawn. Dawn   is an amazingly accomplished quilter but more or less every year, at least once, tells me she should make a T-shirt but doesn't understand how to work with knits. Every year I tell her it's easy. Every year she says she knows she has to make the leap.

This course is the basic introduction to working with stretchy fabrics I think sewers like her might find useful and I have included all my own opinions and tricks in it.

This first course is on T-shirts, subsequent ones are planned on swimwear, neckline variations, skirts, pants/leggings and sportsbras/underwear.

I really enjoyed doing these videos. They were filmed, Covid-style, in my kitchen by my good sport husband.

Hope someone finds the course useful, and given the circumstances, entertaining!