First off I have Pamela's Perfect T shirt mostly done.

I am so in love with her Magic Skirt I decided to try this one out too. So far it appears to be perfect.

I am getting pretty tired of doing that old FBA so it is nice to have a pattern with a darted front option and the forward shoulder etc. already done.

I would have liked to finish it completely to show you but I decided the time has come for me to do some housework.

I have been taking it fairly easy on that front since the big Fix-it in the middle of June.

And my floors have not been done on these knees since just before that.

I have good support who has kept things going,  but really, it occurred to me when I came home from playing 18 holes and walking the course that my argument that I wasn't recovered enough for housework might be wearing a bit thin. I figured hanging my bathing suit out on the line after I came back from the pool wasn't going to cut it anymore as the upper limit of my capabilities.

So I manned up to the house today, or in my case womaned up, and got a far bit done.

I have of course got an ulterior motive in that my middle son who lives in NYC is coming home with his girl friend for a few days between weddings in Prince Edward Island and Maine and mom's house shouldn't be a total wreck.

They will be staying over at my daughter's a few minutes away so they can have time with the little girls.

Wait till they find out when those jokers hit the deck.

But to be truthful my daughter's house is a lot better for company than mine. A greater distance between the guest room and the rest of the folks for instance (here they would be next door - hey we could keep track of how many times everyone gets up in the night to go to the bathroom and I could do that "is that you?" thing when they rolled in at 3:00 a.m.).

Staying at my daughter's is an obvious choice.

I will of course be over there with food at all times, even when the only person awake is Miss Scarlett.

We can sit where the bar used to be and wait for everyone to get up.

My daughter's house is really interesting.

It was built by a former political bag man and it has huge entertaining areas (and only two bedrooms upstairs) and the original kitchen had two ovens and there was a full bar service in the family room (long gone to make way for the Fischer Price).

There is also a full size, as in like a bank, safe with a giant combination lock off the laundry room in the basement.

I am most impressed by this and just wish it could talk. As far as I know the only thing in it right now is my living will with the do not resuscitate part that the family really wants to make sure they don't lose.

This is leading somewhere and that would be why my Perfect T shirt is not finished.

I actually spent the afternoon in my own safeless basement on my hands and knees washing dried syrup  with about 8 million dead flying carpenter ants stuck in it off the floor around the furnace.

I actually would rather have been sewing.

Now here is something you don't get on this blog every day - a housekeeping hint:

If your furnace room is ever invaded by 8 million flying carpenter ants who can see the one crack in the foundation no one else can, and you have just had your uterus removed and are in no mood for that kind of nonsense, what you do is mix up a bunch of corn syrup with a bunch of borax and put it around where they are coming in, and in about a day all those little feet on all those greedy bastards will get stuck to the floor and their intestines will be full of borax which is apparently a flying ant kiss of death.

Now part B of this plan - to clean this up promptly - was never implemented since it is summer and the furnace room is not on the route and if a person were say to just go back upstairs and pick up her knitting and forget about it once she realized she had won - well in that case plan C -weeks later- is to waste a whole pile of good sewing time, scrapping up dead ants.

Which is not as much fun as sewing.

But tomorrow is another day.

Not exactly illustrated and that was the week that was

Unless someone decides that my blog posts are worthy of a full-time salary, I am occasionally going to be absent here, because I have to go to work.

Of course when I look at what I have to post tonight it makes some sense to me that I am not being paid to blog.

This week I decided to make a dress that I knew would not suit me because it was a dress I remembered.

A long, long time ago I had this dress.

It was full and I wore it with a belt at work and as soon as I came home I took off that belt and put on an apron and made supper. I later even left the belt off entirely and wore this same dress as a maternity dress.

I told you it was a long time ago.

Well, when I saw this pattern, McCalls 6600 in the new collection ( I see the early fall Buttericks are out and I am not going to review them - they are all awful) I thought: 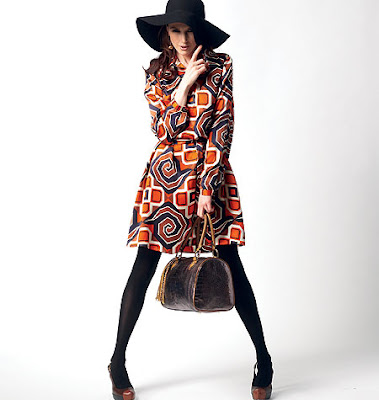 I even think I had a hat like that once.

The resemblance ends there.

I don't wear waisted things because I don't have one but I really wanted that old dress back.

I made mine in some wool jersey this week and went down two sizes as a result because it was a huge pattern and  I had a knit.

I love this new dress just as much as I liked the old one.

Despite the fact I no longer have a waist, and a whole lot of other things, and despite the fact that the baby who gestated under the original is now colouring her hair because she sees grey.

Basically the person inside the dress is the same, and you are going to have to make heavy use of your imagination to see that.

So here we go, the regular odd shots on a windy day, sweating too because I decided to accessorize with real leotards like I will wear with it, and some Naot shoes I got cheap at the Golan Heights outlet store. Winter dress.

Email ThisBlogThis!Share to TwitterShare to FacebookShare to Pinterest
Labels: McCalls 6600

I have a true story to tell you.

I once worked with a politician who was nice but a bit odd.

At one point this person came to me with a private member's bill they wanted introduce that would have legislated sleep.

The background argument, well documented by a huge amount of academic literature, was that lack of sleep was a huge drag on the economy and public safety.

Needless to say that idea was left with me, until now, and didn't go anywhere.

This bill idea was not my mother's although it could have been BTW.

Our entire lives our mother has been asking us about six times an hour if we were tired. (If she is reading this, and she sometimes does, she will verify this).

This will drive a person crazy. And tired. If you ask her why she does this she will tell you it was because, as our mother, she herself was always tired.

The issue of women, sleep and fatigue is an interesting one. In fact I even have a book downstairs written by a famous Canadian women's doctor in the '50s called "Women and fatigue."

This was not my idea.

It seems the dialogue about sleep has been going on in my family my whole life.

My paternal grandmother complained constantly until she died peacefully, and ironically, in her sleep at 95, that she couldn't sleep. We were always being told involved minute-by-minute accounts of how she woke up at 4:00 a.m. and couldn't get back to sleep. My general impression was that she lay there mad, rather than getting up and start knitting slippers which is what she did the rest of the day.

Of course someone should have told her that older people wake up early and then maybe she could have rolled with it to 95.

OK back to sleep.

Why am I thinking about this?

Well since I have spent most of the summer in an unacknowledged period of what my daughter's mother-in-law calls a "convalescence" I have realized, as a high-energy person in genera,l that I do get tired. Particularly in the evenings.

The thing is I don't feel exactly tired but I do note that after 9:30 I lose my sense of humour. Sort of like that time when you kids start school and you finally realize that the feeling you had for say the last 12 years was just being tired.

I wish I could nap.

I actually have never once in my adult life napped.

I don't know how people do it. Like meditation. When David Page Coffin visited me he meditated a lot and that amazed me.

How could he not think about things? What about all the cool clothes and fabrics he saw at Threads? How could he put those out of his mind? How can a person think about breathing and not pockets?

Last night I was going over different ways to do a collar on the dress I am making (more on that later). Sometimes I wake up and look at the clock and am impatient. When will the night be over? When can I get up and do things?

When can I start that collar?

So I have a question for you.

How much sleep do you need? Do you nap?

What role does sleep play in your life?

Crazy question I know but on my mind this morning.