Being with a dog

Miss Daisy sleeps on our bed. I put her there when she first came home with us from the shelter and was so confused. It was the one place that really settled her down.

In the middle of the night last night I woke up with her pressed next to me on my pillow trembling and panting. In the morning she couldn't go for her walk, was in obvious pain, and I took her into the vet right away.

The day was spent waiting for tests and calls at home.

A bunch of things were a little off, but more or less normal and her only real symptom was severe pain. The final diagnosis later in the afternoon was a ruptured disk in her back - this is probably going to mean surgery in Prince Edward Island at the vet college and in the meantime pain control, other meds and bed rest, about a month, no activity, at home if we can do it. Small dogs with short legs and long backs are prone to this.

As a crate or cage is out of the question for her the vet suggested I baby gate (got lots of those) off my bedroom and keep her in there, carefully carrying her out to pee etc. a couple of times a day. I go back tomorrow to see how this is working out.

So that's where we are now. Of course my son's border collie Birdie doesn't want to be left out so he and I and Daisy, who has gone to sleep, are all on the rug beside my bed, pressed up against my leg, waiting for dad to come home from the north pole.

We have the windows all open and can see and smell the backyard, a lovely night and no one is saying a word. We are just being here together - something dogs do particularly well and people not well at all.

My daughter said to me today that I am a dog person but it is more than that. We all have our ways but for me dogs are part of my spirituality. In moments like this one you know they absolutely know what's important without any need for words.

Dogs look ahead and are well aware of the sight of things unseen.

They know that the time you spend next to someone you love lasts forever so that's pretty much all they concentrate on.

While I waited for the vet to call I put in the four invisible zippers into the taffeta flower girl dresses. When I looked at the last one I realized that it was a different colour, I had reached wrong.

I will fix that tomorrow. Right now I am sitting.

I had big plans not to do anything or even blog until I got the flower girl dresses done.

However I have given up on that recognizing that there is a time to stop for the day.

All sewers know what I mean - it's the opposite of the sweet spot - it's that time where you say just one more buttonhole and then you cut through that last buttonhole right through the entire front of the jacket (yes I did this exact thing in a jacket I was making for a girlfriend in about 1975), or you get impatient with taking out a few stitches and rip a hole near the neckline.

I once snipped a thread on my sister's grad dress hem as she was going out the door and cut a hole in the skirt.

You see where I am going with this.

This particular project, these four silk taffeta dresses are going really well and I am being careful. Which is why I knew when to call it a weekend tonight.

I have the skirts all gathered and even hemmed and the bodices finished with the ties in the side seams.

All I have to do now is attach the bodices to the skirts, insert the zippers, and hand hem the linings in place.

Silk taffeta is interesting. It picks up every mark and adopts every wrinkle. I sure wish I could remember who I lent my steamer to, I am going to need it when we unpack in DC. It has made me realize too that when you see those Old Masters portraits in museums and the dresses still have fold lines it is because they were silk taffeta and there was no outlet nearby to plug in an iron or a steamer.This stuff remembers the folds.

When I was doing the hems I got nervous about pins and so used big paper clips to put up the hems when I hand stitched them. This was so fast and easy I think I will use this idea again when doing normal hems: 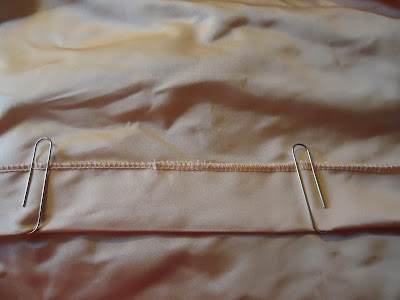 In my spare time I also made my daughter a simple dirndl style skirt so she could try some pattern mixing with a bought top, to be worn at the meet and great after the rehearsal dinner.

After I made this up, she was away for the weekend when I worked on it, she told me she actually wanted the stripes horizontal. I told her I could take it apart and do that, but I really was thinking if she says yes to that one I am just going to quietly leave town so I don't have to.

Some things you just say to show off.

Fortunately she said it would be OK so we left it as it was although I did have to take the waistband off and take it in about 3" because apparently no one in my family can be trusted to take their own measurements, and I should know that, so it is probably my own fault.

A mistake that will not happen again.

Here she is in the skirt out her backyard after a day at the beach with the kids, so you are supposed to take that into account when you look at her hair and make-up less face. 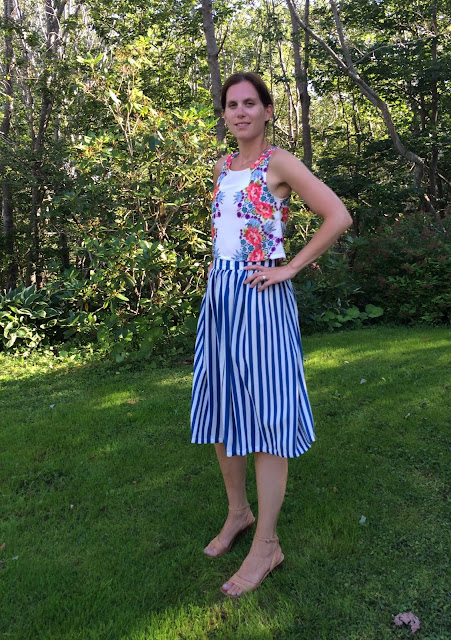 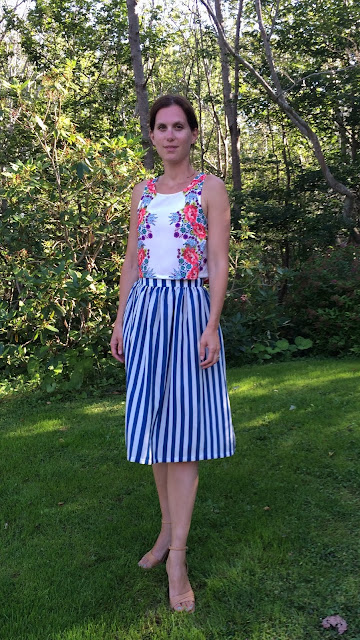 It kills me that she was surprised I didn't do the stripes across - after all these years of sewing I had more or less assumed that any person wouldn't want their bottom half to look any larger than it is - that is at least what I would have thought. As it is she thinks this outfit makes her look fat. Considering she has a 27" waist despite three kids I don't think anyone would think that.

Finally this is Miss Scarlett who saw me with the camera taking pictures and wanted to show you her being a butterfly, that is fabric from my stash BTW: 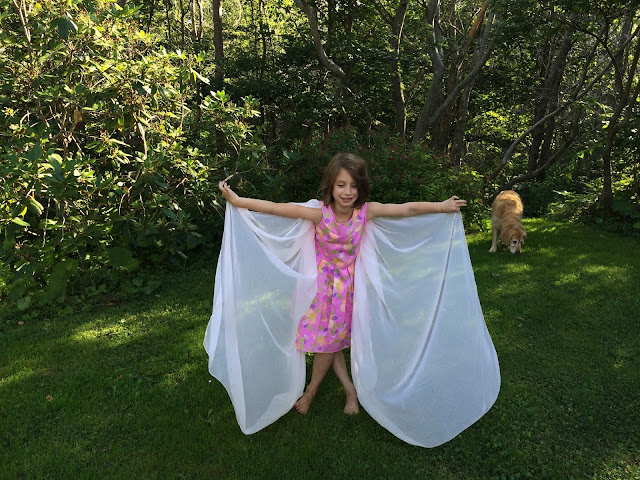 Once I have the flower girl dresses done I think all I have left to do is one for my step-daughter and then me.

Mine is this Marfy pattern which arrived in the mail a few days ago - they come in an envelope just the pattern pieces no picture even of the garment and no instructions. I should be able to figure it out and for once in my life may even make a muslin for this one: 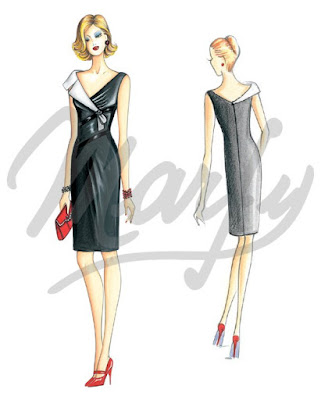 Before I get going on this I have to get my 75 jars of blueberry jam made for the wedding welcome baskets for guests.  I have been in touch with a farmer and am going to go out and pick up 40 pints, which I hope is enough, in about ten days, so I better have all my sewing except for myself done by then.

Somehow this dress doesn't look like something a person who is making all that jam would wear - so I guess my plan is to go to the wedding in disguise.

My husband is coming home Thursday and he just emailed me to suggest a golf over night at a resort for our anniversary.

Little does that man know he is going to be spending his anniversary sterilizing jars for me instead.

For better or for worse, and I am pretty sure he remembers what he signed up for.

Now off the bed. The dogs are looking tired.