I had one of those weeks this week that started out lousy and then got really good.

Let's get lousy out of the way.

School starts next week and beginning of this week I went online to check on one of my courses, a real busy one, that I have built a site for full of notes, assignments, and all sorts of other good stuff. I had finished up on it last weekend and had announced to an empty room that it was the best work I have ever done (you might want to keep that one in perspective).

Well it wasn't there. My work I mean.

Turns out that one of our tech people, the only one who isn't marvelous (she replaced my midterm exam last year with the final exam by mistake doing "maintenance" and I had a bunch of kids write an exam on stuff I hadn't taught them yet - 65 freaked out first years), erased my entire summer's worth of work by mistake.

To make a long story short it turns out there have also been back-up issues and I was told - gee too bad. I was told too that there was nothing to be done, could be done, unfortunately.

Now I only lose my temper once every 15 years and it really is worth waiting for. And I never, never lose it at work.

However it now appears to be exceptions to that rule.

I pretty much emailed everyone I could think of and left messages that are the kind people put on speaker and replay, to everyone who had an extension, until finally someone said:

"Well we could call Larry."

Anyway I said someone had better call Larry and after a day they did and he got it all back in about 5 seconds and then apparently went back downtown.

Crisis averted but really made me wonder if maybe my patience was attached to my uterus, and they both left the building.

Could be an interesting year if that is true.

OK things got real better after that.

I made Miss Scarlett a new dress for school:


And mid week my son from NYC and his girlfriend arrived and one of the things we did was go out to his brother's land to look at the place he has cleared for a house and to harvest from his gardens. Here is pictures of all of that (are you interested in this?):

Now all of this being in the country stuff ended up with my dining room table at home being covered in tomatoes and cucumbers and herbs and I have been canning my brains out, something I really like to do for some genetic born-on-the- prairies reason.

In fact I spent from 8:30-2:00 today cutting cucumbers into minute pieces for relish and chopping up crab apples for jelly.

I had this idea that doing all this chopping would give me time to think but I realized when you do that much chopping you suddenly stop thinking entirely and you go into sort of choppers brain numb - which doesn't feel all that bad if you are a person who had their whole summer's worth of work deleted earlier in the week with all those consequences for yourself and other people for instance.

Tomorrow I should have a whole bunch new jars to line up beside yesterday's product:

Speaking of interfacing, and if I wasn't I should have been, a while ago on a trip I bought what looked like some nice cotton sew-in from Joann's but once I washed it it went all limp and completely useless.

What you see below is a custom serged jelly bag with even the top raw edge finished, suspended over a bowl on top of my basement freezer. That's crab apple juice dripping out and if we are lucky tomorrow it will be jelly. 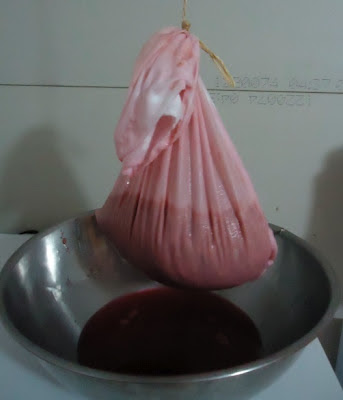 And then I am going back to making T shirts. 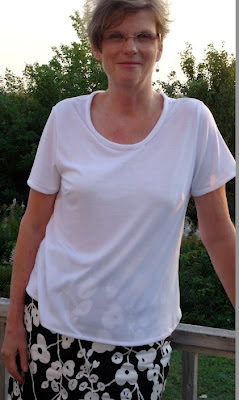 My first look at the Perfect T looked pretty good - shoulder was right - but I clearly chose the wrong size. This is a small with the dart version and the FBA addition in width working along to the bottom. It is too big on me.

I don't always say something is too big, and a small at that (my full bust measurement is in fact a medium in this pattern) so it is back to the drawing board and an extra-small (ha) and the plain front without the bust dart.

To be fair to this pattern the fabric is very fine and this makes it look even more drapey - you can see that by the print from my skirt showing through.

However I do love this knit and have more of it. It's a hemp knit and so soft you could dress a newborn in it. This particular T shirt has a happy future life as a top half of some pajamas for sure.

I am going to have another go at this pattern for a potential TNT T shirt.

And if I'm not giving up on this pattern you shouldn't either. At least not yet.

On another note I had a super busy day and in the middle of it decided that I needed a treat.

So I took myself off to the mall - it has been a year since I have done that- and decided to see what was out there in basic work sweaters.

Being in the stores sort of weirded me out.

I make my own clothes and put a lot of time and far too much thought into having clothes that I like and feel good in. It takes time (see above work in process).

The expensive jackets made from fabric of a quality I wouldn't waste my sewing time on. Tops that were too short and too wide - not much that shaped like me. The same colours everywhere and not my colour.

Sales ladies who thought I was too fussy, nothing that gave me the rush I get from shopping for good fabric, nothing that I wanted to touch.

In the end I got three simple pullovers, the most boring basics but something I can wear as backdrops to the nice clothes I can make myself and I stood at the counter paying and thought "This isn't my culture, I don't feel like I belong here."

In the end the only shopping shopping I like doing is online, a throwback to the old catalogues of my youth, when I can take my time.

How do you feel about clothes shopping?

Where do you go for basics when you want to buy them?