Sewing as a character building exercise

Today my friend Trudy and I had one of our all to infrequent sewing days together.

Trudy made a great knit top and then we both moved on to projects that were unfamiliar to a pair of garment sewers like ourselves. I worked on bags, which meant unfamiliar shapes, and Trudy tried to figure out some stuffy toys for her granddaughter.

My efforts in particular were of the one step forward two steps back variety. The reasons for this were 1) I talked the whole time, once again demonstrating that Babs can't talk and read instructions at the same time 2) I have sewn so much, but not bags, that I skimmed the instructions with the assumption I knew what to do, when in fact I did not and should have been reading every word with full attention (see point 1).

However I didn't give up and improvised a series of fixes on the time honoured principle that most folks would think those extra seams were supposed to be there, and Trudy, being my friend, was wise enough to tell me that no one would notice.

The persisting, which women as we know do, made me think of the things sewing had taught me about lasting through life. In fact Trudy and I discussed various challenging times in the past that we worked our way through, probably because of the way sewing had toughened us up.

To summarize a highly intelligent discussion I think sewing has taught me these life skills:

Now over to you.

What has sewing taught you about life?
Posted by Barbara at 9:19 PM 14 comments:

Review of Jalie's Hélène cardigan on the job

Every once in a while a pattern comes along that is just so useful and clever you know right away it is going to be a winner. Jalie's Hélène  cardigan is a pattern like that.

Last Tuesday I went to my local sewing guild meeting and quickly realized that half the women there had already made this pattern. I was on my own to-do list so the next day I cut one out.

Of course the recommended fabric was for something soft and flowy but I didn't have that, so I just went ahead and cut it out of some cotton ponte just to try it out.

This is an exceedingly interesting pattern, a cool inseam pocket, a sort of peplum at the back and a high neck shawl collar with a simple turned and topstitched edge that I cover hemmed. Since I am tall I added 1" to the body and 2" to the hem.

The sleeves were narrow below the elbow, fine for me because I have thin arms but if you don't, or want to wear it over another top, I suggest you just widen the sleeve below this point, essentially eliminating the distinct taper.

I was super pleased with this cardigan but when I showed it to my husband he said, "very nice but it looks like a lab coat" - due to the fabric of course. I tried to talk him out of this opinion. He retreated of course as husbands do with a "well what do I know?" but of course he had made a point.

A few days later my daughter who is a nurse, a care coordinator in oncology at the children's hospital, and my niece who is currently living in my basement while she studies nursing, looked at it after Easter dinner and they both said to me,

And of course my daughter wanted it to wear to work. The fact the style and the fabric were somewhat tailored, but that as a knit it was comfortable and stretchy, were perfect for her work with the kids and parents.

So here my cardigan is in its new life as a lab coat on Katrina at work today.

I am pretty proud of it. And of her: 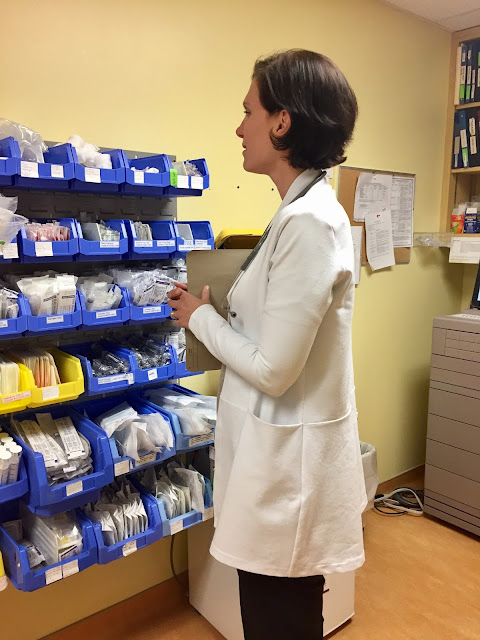 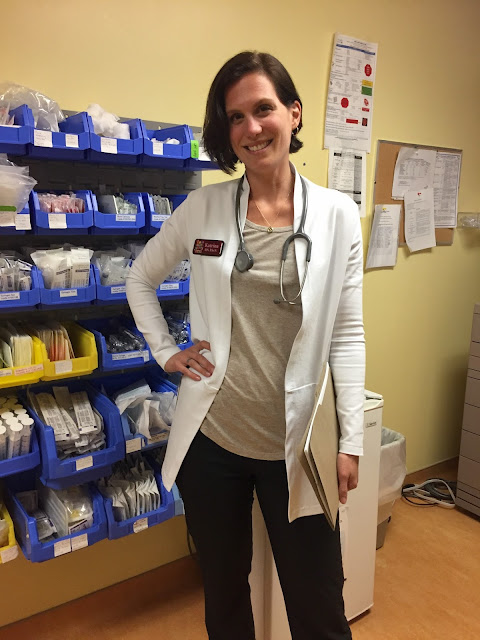 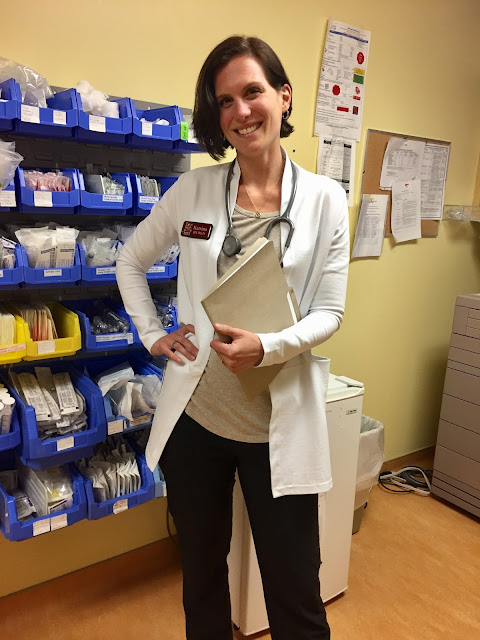 Maybe not the fabric and use the designers intended but a great result. Katrina now wants three more and said she could have taken orders for 10 more from her colleagues.

So I will be making more of these for my daughter but not before I make a few for me.