I am not sure how long I will be online today, Earl is pulling the leaves off my trees outside and my DD just called to say her power is out.

I have been thinking about my blog and last night decided, enough already with the lousy pictures. I really should do some little self-education and learn how to do this better. I started last night finding Blogger helper information and this weekend am going to learn how to use my husband's much better camera. Bear with me and expect to see one thing learned a time on each photo.

If any of you can direct me to good places to learn more about this, that would be much appreciated.

Oh on the sewing front. One dress to post and the next two skirts in the works. One interesting, one boring but necessary.

Email ThisBlogThis!Share to TwitterShare to FacebookShare to Pinterest
Labels: Photos

Pleats are interesting.
I have noticed them in tailored vintage patterns as a way to add movement ease while still keeping the slim profile.
A few years ago I came across a pattern for a narrow skirt with a front box pleat and was amazed to see that the pleat, which I would normally have expected to have separate pattern pieces, was made by just laying the centre front of the skirt front 3" away from fold, stitching a centre front seam down to the pleat opening, pressing a box pleat, topstitching the seams open above the pleat, and hemming.
You can see the end result here to the right in a skirt that I have worn and loved for at least two years.
I use the same method to make knife pleats at the bottom of skirts, although I don't leave the wide 3" pleat fabric up the length of the skirt, like I did in this vintage knock-off. For skirts I just lay the vent extension on the fold and pivot out a stitching line to the fold, like I have here: 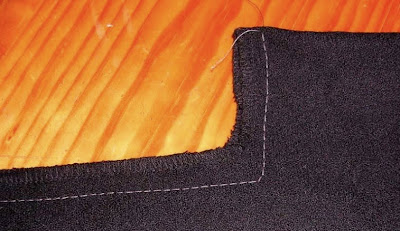 The key to keeping the pleats sharp is to top stitch the pleat fold(s) close to the edge on the inside right through the hem.

Let me know if these instructions are clear enough. By using the fold, and eliminating the seams of pleat pieces you get a much lighter, more elegant finish. And because the fabric is on the fold the grainline will be perfect, which is essential to the hang of a great pleat.

When what you are creating is yourself

I was all set to go to bed but I've come back because there is something on my mind.
A well-respected sewer on another blog has been fielding "where do you wear those fancy clothes" questions.
This resonates with me and it brings to my mind a comment Carolyn made here a few days ago about make that silk top and wearing it to the grocery store.
Of course I should and I will.
I used to teach sewing classes sometimes, when my kids were little, in the evenings for a local fabric store. Off I would go in my heels, still leaking milk in those early classes, and do my best.
I was always amazed at my students, the ones who were spending absolute fortunes on expensive fabric, machines, and patterns but who would come to class in tennis shoes, jeans and, I kid you not, husband's T shirts.
You see when you sew you have a chance to not just create your clothes, but in some ways, your life. It is an opportunity to take.
I did that in several ways at various times. I sewed, and thought about clothes, and figured out how to do it better. I learned to look the part when I needed the part.
At one stage, my first husband had exited, and it was not easy. One day my daughter went down to the drugstore and bought a pen. She came home and gave it to me and said "this is for my mother the writer." Well, because she expected it from me, I wrote to Threads and told them what I made, and what I thought was important about sewing. The wonderful Christine Timmons, retired now but a truly great lady, asked me to write some articles for them and I did, quite a few articles eventually.
Then one day the equally amazing David Coffin called and said he wanted to come and visit, and could he stay with me and talk sewing for a few days? Now I was a single mother with a bunch of kids in a little house. I didn't have a "studio". I wasn't an artist. I was, and I am, an ordinary sewer with a very ordinary life. Of course, I had a fit. A complete fit.
Well, David came and he was wonderful. He explained deep mediation to my then very young sons, who thought he was amazing. He showed them how to drink "greens" from a bottle and talked to me about sewing and his paintings and life. One boy moved into his brother's room and David stayed in a little kids room, surrounded by little kid mess, and acted as if it were perfectly normal, as if my ideas, thought in my own house, in my own head, from things I had observed and taught myself, were as significant as anything that came from any New York atelier.
I kept sewing after that, worked at increasingly complicated jobs, and as I went, kept making my own clothes.
I don't know quite why I am telling you this, probably the most personal thing I have written here, but I somehow want to share that sometimes people, women, need to and can make who they are. I did.
Sometimes we are called on to reinvent ourselves many times in our life times, and we have a right to do that. We can sew an outside that expresses the inside. Sometimes the world doesn't hand you much respect, and you start by making it, literally, for yourself and by yourself. You should dress as well as you want, sew as much as you want, be who you decide you can and need to be, and be good to yourself.
You can sew a life.
OK now I am going to bed.
Posted by Barbara at 9:22 PM 19 comments:

I want to thank anyone who has taken time to post comments to this blog. I don't usually respond with a comment of my own, unless it is to provide information, maybe I should, but I appreciate hearing from you so much.
Like most of you I do not have many, hardly any, sewing buds in my real life geographical area. And  most of the workplaces I have been in,  saying you sew, well that gets you the kind of looks you would get if you said you were a competitive yodeler, quaint and probably nuts.
So, like many of you do too I am sure, I sit down at my dining room table and write about the one activity that I love more than any other, and when I read a comment back from some other part of the world, saying you know how I feel - well I feel the way I do when I read your blogs if you have them - connected.
We had a busy week here. Miss Scarlett was quite sick, better now thanks, but we spent a day in Emerg getting tests etc. and it was all pretty stressful for the family. I was fairly worn out by the evenings so when I read messages from you, well it gave me a lift.
Thanks for that.
Posted by Barbara at 7:35 PM 2 comments: 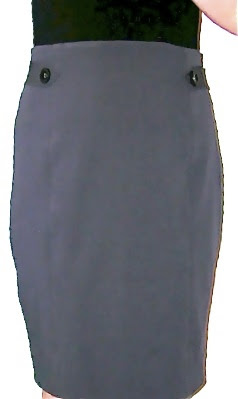 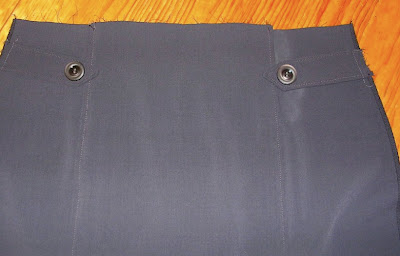 First of all I apologize for the weird photos. No I was not standing on the deck of a ship while it listed to the side.
I was in my kitchen asking a busy man in the middle of dog biscuit production (don't ask, this is a job he takes very seriously. I mean what do you do with a man who actually asks you if you think it would be alright if he substituted beef bouillon for the chicken stock the recipe calls for? I mean these dogs will try to eat poop if they find it in the woods).
So these pictures were taken by a man with one hand on the baking sheet.
It shows.
At any rate this is what I have to tell you about this pattern.
I used a wool stretch gabardine and found that the stretch does add mystery width. I took this in a few inches at the bottom to sort of peg it (may have over done this) which I think makes me look thinner. Don't tell me if it doesn't.
Other changes I made were to cut the waist facing in one long piece, eliminating the side seams meant to join two perfectly rectangular and straight pattern pieces - why do they do that? - to make the waistline smoother.
I am all about eliminating bulk.
I also added a pleat at the centre back instead of the usual vent. I hate vents and the hassle of lining them. I usually just leave an opening in the lining, but all that pressing to one side is annoying. You usually aren't brave enough to cut to the stitching and get a lump where the vent starts.
Since I was on a bulk-eliminating roll I cut the pleat on the fold (see second picture) and interfaced the pleat line, which is something I once read in Threads. By eliminating the seam that you would usually have to make the pleat, I think I got a smoother, not to mention faster-to-sew, result.
I love this skirt. The vertical seams are slimming. The tabs with the buttons I think create a sort of waist shape which is handy if you don't have one yourself to work with.
But mostly I just love the slightly raised, interfaced waistline. This is so comfortable to wear and stuff will stay tucked in, which I usually don't do because of the tummy thing, but this skirt seems to smooth that out.
This is big news because I haven't tucked anything in, in about the last 15 years.
Isn't it just great when a really stupid style like low waisted, belly-button-exposing garments go out of fashion and something comfortable and wearable comes in?
This will be temporary of course, but I am going to enjoy this trend while it lasts.
Posted by Barbara at 6:07 PM 5 comments:

Email ThisBlogThis!Share to TwitterShare to FacebookShare to Pinterest
Labels: Vogue 8672

Every other Wednesday pattern give- away September 1 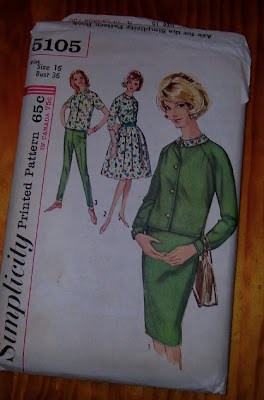 Here we go again, size 16, bust 36. Please email me direct (see link under my profile) and I will send this pattern off to the first person I hear from.
Posted by Barbara at 6:00 PM 1 comment:

Email ThisBlogThis!Share to TwitterShare to FacebookShare to Pinterest
Labels: Every other Wednesday pattern give- away
Newer Posts Older Posts Home
Subscribe to: Posts (Atom)