Every once in a while I read something that seems to hit exactly where my head is at the moment.

Today it was this article on Hygge Chic which apparently refers to a Scandinavian idea of "feeling cozy and snug, and being kind to yourself."

Of course it doesn't escape me that this idea came out of a cold weather climate like mine, and say not out of the Caribbean, where the need to wrap yourself up is undoubtedly not the same.

Hygge is an idea worth thinking about.

It suggests treating yourself kindly as a style statement, as something you can plan for, as opposed to something you revert to by putting on the old worn standbys hoping that no one comes to the door.

This idea of dressing for your actual life, and sewing for it, finding fashion that fits these needs rather than trying to fit yourself and your style into fashion, has been on my mind all week.

To give you an example here is what happened, among so many other things, in my life this week, what I really need to dress for:

You just don't do this life in Spanx and three inch heels, although hats off to those who can.

No wonder Hygge Chic is speaking so loudly to me.

As a result I decided to tackle real garments I need, one issue at a time.

First up getting up in a national park and taking the dog out for a walk when I wish I didn't have to.

Needing pockets for the poop purses (what we call the doggie bags for some reason) and my phone, because I might as well count steps, and my son might be emailing me an "I am alive in South America" message.

What I came up with was this pattern and some sort of cable type patterned Minky. Very cozy if not elegant, as close to adult swaddling as you can get. I hope to make a lace/mesh vest version too to go over shorts and T shirts when I need the pockets and not much else.

Back to the Hygge jacket. Made as per pattern but put in one giant snap in case I need to close it up:

I was about to head down into the basement and the treadmill when, looking on my iPhone to see how many steps a person takes when they have done nothing but work on a computer all day, I saw the new Spring Vogues were up.

Since the outside is polar temperatures and the landscape white icy concrete, anything with the word "spring" sounded pretty good to me.

So here, still on the way to the treadmill, are my impressions.

Disclaimer is that there are some trends that just refuse to go away despite the fact I don't like them at all, never did, never will. I won't be commenting on those patterns at all.

These trends, just so you know, are high/low which my eyes still see as a mistake, colour blocking, which I know from experience is something you get pretty sick of after you have worn it three times, and those innumerable tops that stick out in points at the sides.

That said here are a few interesting patterns I noticed and noted:

When the pictures don't match

While back I mentioned that this was my pick for the early Spring McCalls if you were looking to sew something wearable (sorry I am not putting jumpsuits - a garment that designers have being trying to sell us for generations - in that category): 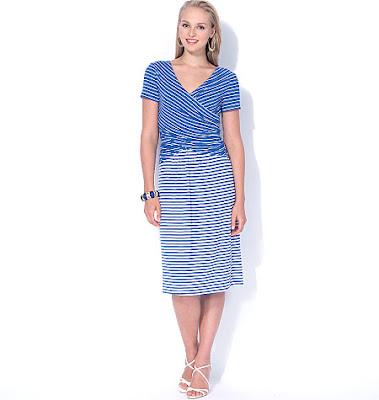 Now correct me if I am wrong but doesn't this look like an A line but more to the straight skirt shape?

So why does the line drawing look like this?

And the hem width is really wide.

I have my suspicions.

I once helped unpack Big Four fashion show samples and saw much evidence of "tweaks" of the pattern to achieve a more camera ready look.

Probably not the biggest mystery to be solved on the planet today but one I am thinking about.

Butchery ongoing at my place

I have to make this quick.

We cut the cable cord over here a few weeks ago, since all we watch is online news and Netflix, and now I have to go over to my sister-in-laws tonight to watch Downton Abbey.

I enjoyed Christmas. I always do. That's just me.

I know that there are a lot of folks out there who don't feel like this. Some people associate this time of year with terrible memories and of course I get this.

Every time I read of someone who bought it on the roads this time of year I always think great, now that whole family is going to have to think about this every Christmas. My own dear friend lost her dad on Christmas Eve and her husband on New Year's Eve and needless to say the holidays for her were just something to last through. Who wouldn't understand that?

However without that to think of for some reason, despite all the intensity of emotion that Christmas always brings out in families, I always enjoy myself. I had fun the Christmas everyone vomited, for instance, I have found times to enjoy in all crises that coincided with the holiday, in sickness and in health, in things coming apart and that person who gets glum, I don't know, I always have a good time.

Think it's maybe the bright lights.

My made with loving hands got mixed reviews this year. Miss Scarlett loved the doll clothes and her less diplomatic four year old sister said "well I like them but not that much."

Fair enough, it was a good quote anyway.

My sweater for my middle son, the one he requested, was not one of my greatest hits. Sometimes I find it hard to transition from sewer to knitter.

For example there was a four inch jump in the sizing and my kid ran between the two so, knowing he had slim hips but strong shoulders, I came up with the idea of going down a size in the hips and up to the next size in the shoulders. (He has a 42 inch chest so I did 40 hips and 44 chest).

What resulted was a sweater that looked so V shaped on that he did a muscle man imitation in it, my husband asked "Is this supposed to be a Superman suit?" and my son-in-law who I otherwise really like laughed so hard he fell off the couch. I was actually planning on gifting this particular SIL with a sweater for his birthday but now may do that next year instead. Or the year after that.

At any rate I had to reclaim the sweater for a major fix up.

Now a good knitter would have unravelled it and started again but I am a risk taker and also a sewer so I looked at this differently. Seeing the sweater as fabric I knew exactly what kind of alteration it needed I figured (ignoring the fact that I have already demonstrated faulty judgment so far on this project) so instead of unraveling, I zig zagged the lines where I needed to take it in, cut right through my knitting (I sort of remember this idea for making steeks in the Craftsy course I obviously dropped out of) restitched (small zig zag, think sweater knit, in this case literally) and then inexpertly picked up new stitches around the armhole for more normal looking sleeves.

I am pretty sure all this proves is that I am an experienced sewer and probably never going to be a great knitter.

And if you don't believe me here are the pictures: 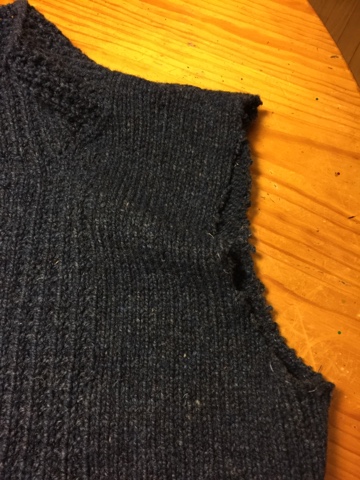 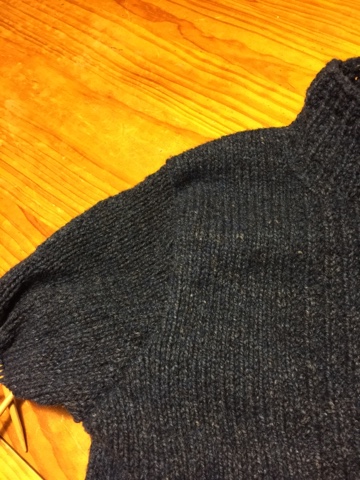 Now off I go to see if the Mr. and Mrs. Bates can avoid criminal charges for at least five minutes, if Lady Mary will ever figure out that Tom Branson really is the obvious choice for next husband, and if poor Edith can pull herself together long enough to understand that if she stops expecting the world to abuse her it might do that.