I have to say something came in through my inbox this week that disturbed me. It was this picture for a new Morris jacket pattern from Grainline Studios: 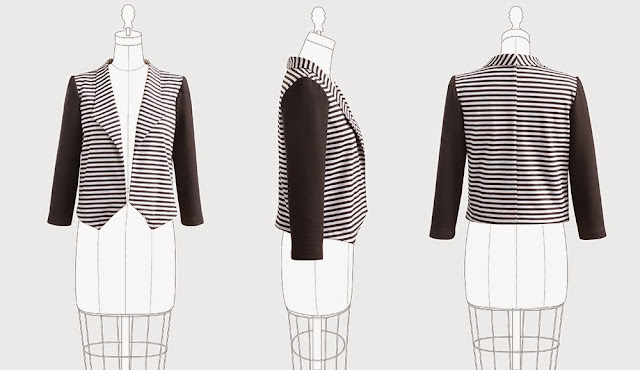 You know I have had excellent experience with Grainline. I have made and worn both the Archer shirt and Adler dress and I like them both.

Listen you all know I am not the world's most fussy sewer.

I am after all the person whose nerves were so frayed by a largely hand-stitched Chanel jacket that I almost took it out onto the driveway and drove the SUV back and forth over it. I would have done that in fact but the garbage men came first.

But I am just disappointed to see such an obvious lack of care here. That these stripes are out of whack in a promotional photo for a new pattern described in glowing terms bothers me.

It is like when you go all out to a very nice restaurant and then you notice that there is someone else's bright red lipstick on your glass - sort of makes you wonder if they are wearing their hairnets in the kitchen.

Bit of a let down.

The thing is matching stripes is real easy.

The trick is to cut out single layer.

You will never get it right if you are working blind with one layer hidden underneath. Fabric, particularly striped fabric, likes to move around under there.

If your pattern piece is in two parts like this back with a centre back seam, all you have to do is cut out one, flip it over so you're getting same sides together, and fiddle around with it so the stripes on the bottom piece are in the exact same place as you see the stripes on the top piece. Then you just cut around the pinned pattern piece as it lays on the bottom layer of fabric, and you are done.

Two identical striped matched patterns pieces that with a bit of care can be stitched up so the stripes stay matched.

And of course if you are cutting a piece that  needs to be cut on the fold, just pin your pattern to the single layer, cut it out carefully stopping the cut exactly at the fold line, then flip that piece over, folding it along the fold line. Then, sandwiching the pinned paper pattern between the two layers of fabric, adjust so the stripes all match, and cut it out.

That's how to do it in words, the illustrations are clear here in my mind's eye. If I had an Apple phone I am sure I could press it to my forehead and you could see it too.

I mean no disrespect to the pattern designer here. I do understand that some samples are made under pressure and when you are tired, but really if it is the picture you are using to sell your pattern you really need to just call me and I will come right over and do this part for you.

A good pattern should look like it is.
Posted by Barbara at 5:02 PM 12 comments:

Where do I start?

We have been home for almost two weeks.

An hour before we drove into the driveway we got a call from my youngest son to say he had broken up with his long time girlfriend. The girlfriend who was living in my house and filling  it with her transplants.

I really like this girl but the family saw this one coming. Different directions.

What it meant to me immediately though was a heartbroken very nice girl in my house when I arrived home. To make a long story short she stayed with me for a week and a half. I did everything I could to support her. It really, really tore me up to see her heartbreak. But at the end of the day it became clear to her that living in my son's childhood bedroom crying and having the mother of the guy who broke her heart make her tea wasn't the best way to heal.

I am sure she will be just fine. I expect I will hear from her from time to time in the future. She really is terrific, but the right guy for her is just not this guy.

Between you and me having someone that sad in the house wore me out. You want to say, listen hearts are stronger than you think. One of the best things about getting older is knowing that, but of course you know that only because when you were 25 someone broke your heart and there are no shortcuts. When you are older you can see the humour in even the really terrible things, if only fleetingly, and you are better able to take care of yourself. For instance if that had been me I would have sat myself down and started ordering fabric - that always helps.

In fact when all this was going on I did some sewing. I made a knit straight skirt and this top: 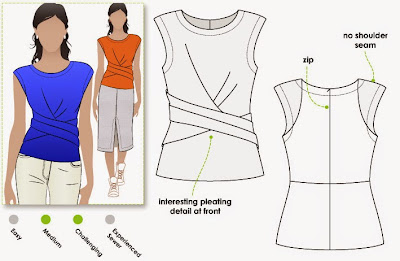 The Madeleine from Stylearc.

I was pretty pleased with it (pictures pending, my photographer is out of town right now) and wore it to an extremely weird event where two former politicians who have each written books stood on a stage and accused the other guy of lying. I was supposed to be moderator.

How do I get mixed up in things like this?

At any rate here is my in the outfit sitting down.

I realized that all that extra fabric bunches up when you are not standing in your bathroom admiring your wonderful sewing in the mirror and I have since taken in the side seams and tacked up the wrap a bit since I wore this then. That's what I will show you when I get the shots snapped this weekend.

Anyway here I am dumpy on the stage: 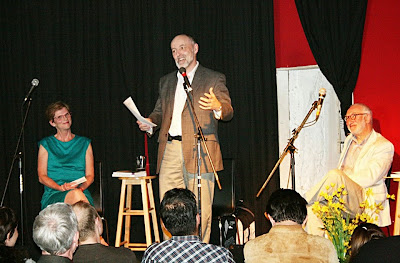 Finally I was so sorry to hear Nancy Zeiman is dealing with bone cancer. My daughter who is a paediatric oncology nurse always says that the reason folks get nearly all cancers is just bad luck, but I was so sad to see that this is something Nancy has to deal with. Hopefully her treatment will go well. She certainly is one tough cookie and so many of us are rooting for her.

Sewing with Nancy was such an important part of my life when my kids were small. Catching that show was a highlight of my week - a time when I got to concentrate on something that interested me. As soon as they could walk my kids knew that when Nancy was on mom wasn't going to do anything for you until it was over. Not get you a bandaid, make you lunch, rescue you in the bathroom.

In fact I can remember standing with the three of them in the grocery store unwrapping a book from Nancy I had just picked up at the post office she had sent me because she had used one of my hints on the air. My hint was actually published in the book and I was thrilled. To my little kids this made me a star because they sure knew how important Nancy was.

You know I was probably far prouder at that moment than I have ever been at anything else I have done, the world reflected in the picture above included, maybe particularly.

The things that the world thinks are important or impressive so often aren't the things that really matter to you most, you know, but only you know that.

I heard from an old boyfriend this spring, a source of a broken heart 40 years ago. We have both gone on to happy lives, me with Leo, he with Stanley, and I am so happy our friendship has returned to us. In fact I am sending off all those photos from years ago to him. They have his mother and a brother he lost in them and those belong to him not me.

In one of his messages to me he wrote that he had read my blog and was happy to see I was still sewing, because "sewing was always in your blood." I found that someone remembered that about me enormously comforting in a tough week.

All this is in my mind because yesterday I think I may have found the person who could replace me at my job. As of the end of August I am leaving full time teaching and going to be doing only a course or maybe two some terms. I love my teaching but need to open myself up to the projects that have been waiting for me.