My day in the bathroom 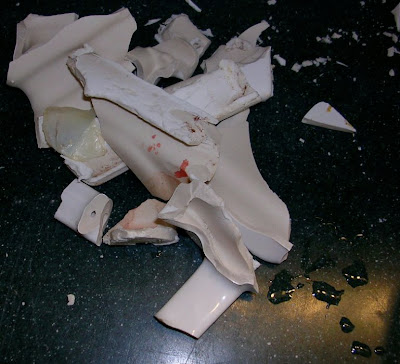 I have new neighbours. The old neighbours moved to a small condo because, as Al said, at their age you have to start think about something easier to maintain.
Al and his wife are at least five years younger than I am.
The new neighbours are having no trouble at all taking care of Al's old house. The girls are always out and about chatting to who ever goes by with a dog, mowing the lawn, fixing the roof, and taking care of business. No one over there is waiting for a man to come by and work on the house, and things are going just fine.
I woke up in the middle of the night to think about this. You see I was talking to my mom earlier in the day and like a lot of widows she is getting overwhelmed with the little things of house maintenance - sinks that are draining too slowly, loose carpet in the hall. You can hire someone to clear the snow and cut the grass, but who are you going to call when the mailbox falls into the bushes?
I would bet that the number one reason older women go into seniors housing is not broken hips but broken drawer handles.
I myself am guilty. With my husband back and forth to work in the States I have started to write to- do lists for him when he comes home. Things I need him to take care of for me, things that involve wood being cut or stuff nailed down.
My thought, at 2:00 a.m., was well why can't I do these things like the girls? Surely someone who can handle a five thread serger can hang onto a circular saw? Certainly someone who has actually completed a number of Vogue Designer patterns and worn the result can sand a floor? And absolutely someone who knows how to do a FBA doesn't need a husband to come home 2,000 miles to "screw that edge trim thing on that one basement stair back on" (item #17).
Doesn't this put me in the same category as those annoying people who bring you a button to sew on, because they just "aren't clever?"
All this brings me to my bathroom. I got up this morning and decided to learn how to do things myself. I decided to start with the bathroom because it is the smallest room in the house.
I spent most of the day at Home Depot.
I have replaced the rusty thing that looks like a giant grommet around the shower head with something that is not rusty. It is called a flange. I bought paint and undercoat, brushes, a new bathtub plug and I checked out a new window (this one is going on the husband's list).
When I got home I looked around and decided that the thing I like least about my bathroom is the two ceramic-attached-to-the-wall toothbrush and soap holders. These two units have been dripping soap juice and toothpaste onto a dark green counter for over 20 years, so more or less no matter how often you clean it looks messy in there.
So I eyed these dumb holders and found one that looked the same in the store and figured out that the ones at home had to be only glued on, not built-in.
A hammer and my husband's good wood chisel later I had both devices in pieces and off the wall, with the tiles behind untouched.
Pictured above, and yes that is blood.
And worth it.
Tomorrow I am going to re-grout the tiles.
And #17 is on longer on the list.
Posted by Barbara at 7:12 PM 8 comments:

For those of you who don't know it is possible to access Burda magazine patterns, available for download/purchase from the German website here.
Now for the life of me I don't know why this service has not been available to English readers, but it does reinforce my suspicion that they are moving towards digital production. I know magazines in general are a declining business so maybe that's why.
In the meantime this is one way to still access the patterns without having to buy every issue of the magazine. I am not sure that all that many of the current styles grab me, however I am on the look out for a good winter coat pattern and so I am going to keep my eye on this site for those. There are usually not a lot of coat patterns to choose from in the Big Four.
Posted by Barbara at 6:21 AM 1 comment:

Email ThisBlogThis!Share to TwitterShare to FacebookShare to Pinterest
Labels: Burda

Is it just me?

Weird meetings today. Sometimes adults are too much.
Is it just me or am I the only one who sometimes feels that the only part of life that makes complete sense is her sewing life?
Or that the only place she truly can let her shoulders down and be herself is behind her own front door?
Or that the most peaceful place on earth is sitting in front of the sewing machine.
Or is it just me?
Posted by Barbara at 4:06 PM 5 comments:

Email ThisBlogThis!Share to TwitterShare to FacebookShare to Pinterest
Labels: Life

The last of my summer sewing 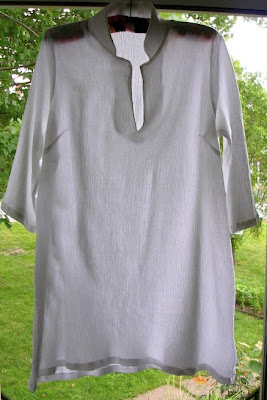 Here is a simple top, lengthened to a beach cover up to wear maybe with this pair of Jalie PJ pants a.k.a. my favourite pull-on pants pattern. To wear after swimming on sunny days, or for schlepping around in the summer evenings when I don't want something to stick to my skin.
Both out of crinkle cotton I bought when for some reason I thought I was going to make some curtains. Let me tell you that my home dec intended fabric can sit in my stash for a very long time untouched, at least until I can figure out how to make a garment out of it. All the rest of my summer projects are getting packed away where hopefully they will be a nice surprise for me next spring.

Posted by Barbara at 9:43 PM No comments:

Email ThisBlogThis!Share to TwitterShare to FacebookShare to Pinterest
Labels: End of summer sewing

Almost ready to start something new

Later tonight I will be posting pictures of my last official summer project.

My husband has brought me various fall patterns home with him from Tennessee. I have been stalking the JoAnn's flyers, those I can read online, and texting him pattern company names and numbers and the dates the sales are on for. He has been very nice and gone and picked up all these patterns for me on his days off.

Most of these are dress patterns.

Have you ever got to the end of a season and found yourself so sick of all of your clothes to the point that you really wanted to throw the bunch of them into the garbage rather than packing them away until next year?

I felt like that the end of last winter.

By the time I had taught my last class I was ready to burn every worn-to-death black skirt, grey and black pants and all those tops and blouses that I had pulled off those hangers a million times in the early morning dark while I got ready for work. My clothes felt to me like those last five papers that you find at the bottom of the pile after you had thought they were all marked - you can hardly face them.

I just can't stand looking at this same stuff again, not one more winter. Mind you the stuff I have kept is still "good", as my mother would say, and there is no good reason why I can't wear it again. After all it is new students I will be teaching, and my wardrobe will be new-to-them.

I feel different than I did last year and the year before. I'm feeling more stylish, a little more independent, a little like I am not in the mood for standards. I am not feeling all that standard any more. Maybe as my kids are definitely older and I have more time to myself, maybe as I see myself working more and more only at and when I want, I am starting to feel that my life is taking shape again as my life, my own life and you just can't wear old clothes to that.

I'm going to start cutting out and cutting into that life tomorrow.
Posted by Barbara at 2:51 PM 2 comments: 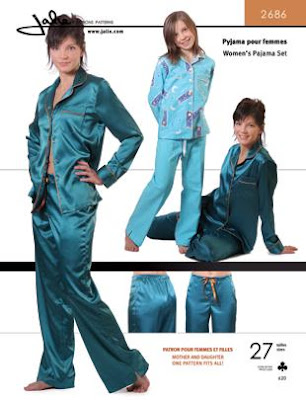 Every once in a while I decide to make a pair of quick pull-on pants. I usually do this in the summer, at least once every summer, and it is always a disaster.
You know what I mean. Huge pouffy elastic gathered waists that ballon out when you sit down. Waists that add at least 20 pounds exactly where you are trying to lose 20 pounds. Baggy legs, droopy bums - pants that you will only wear out to take out the garbage at 11:30 at night because you forget to do it earlier.
Well, last Christmas I made my daughter some PJs from the Jalie multi-sized pattern and she was impressed with the ready-to-wear fit and the fact that they were comfortable  - but not at all home-made looking, unlike what she had seen me make in this department in the past.
So, by a stroke of genius, I pulled that pattern out and made a couple of pairs of elastic waist pants for summer, around the house, but in the daylight, wear. I dispensed with the drawstring and just put narrower elastic in that casing in the front.
Here is the muslin (not a fabric I would have chosen but fabric I had for experimental purposes.) They are not bad at all and very comfortable. Note the lack of drag lines on the inner thighs, excess fabric under the backside, and a whole lot of bunched up stuff under the elastic casing.
Will refine these a bit, add more for the mature waist, but on the face of it, I'd say we have the beginnings of a winner.
Posted by Barbara at 7:37 PM 3 comments: