I finished my youngest sons's socks and here they are. Yes, I know the stripes didn't turn out exactly the same and this was me really trying. 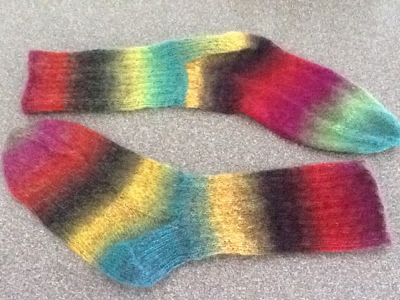 He will be happy with them this way and will probably lose one pretty soon and wear it with an orphan from another pair I knit.


Having a party for him here today, and as there will be a few folks, I am ordering in. Birthday boy's choice. I am suppose to phone up the Jerusalem Cafe and say the guy who loves fava beans wants enough food for a party.


We should be good and if he doesn't dig up the front lawn to put in a garden so I will be food sufficient things should go as planned.


Seriously, he has put in several gardens of his own and can grow anything. None of his vegetables ever have so much as a bug bite in them. This green thumb thing, which I don't have, is no joke.


Some people can just grow anything. He hovers and I think that helps. Those plants know he is watching them every second so they are careful.


Your children always surprise you and that's the best part.


Whenever I finish a pair of socks I am left with a small ball of sock wool. I have saved many of these and even went so far as to download a patten for knitting little tiny squares that would, in about a century, become an afghan.


I can kid myself a lot but even I could see this was never going to actually happen.


But that still left me with a huge collection of sock wool scraps. 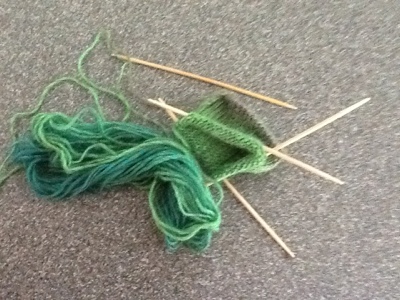 Then it hit me and I remembered the "Bag 'o Barbies" I picked up in Florida for $6 for the little girls.

Now I am fully aware of the gender issues involved with Barbies. I know more than a few mothers of my daughter's generation who have banned them and I see why.

There is the giant boob issue (although the new Barbies have gone down a couple of cup sizes) and the fact that she represents a woman who is largely over involved in her wardrobe ...

However I wonder if those who have banished Barbies ever really played with them.

Ken was just a prop.

Someone to walk across the floor in little bouncing steps to say in a fake low voice "Barbie let's go on a date" and then went back into his Ken coma.

Barbie always replied to this invitation with "First I have to change."

Yes Ken was just a prop and if he hadn't had that one line to give Barbie a reason to get dressed up there would have been no Ken. I suspect he knew this.

It was Barbie the original single girl with her huge suitcase of clothes. All coordinated, all accessorized.

As one of four girls I have serious Barbie playing experience.

We had tons of clothes. The best ones were from an elderly aunt or cousin on my mom's side who for some reason sent us once a huge shipment of knitted clothes. These were the best. The clothes bent, which Barbie's arms didn't, and they were easy to take on and off. No struggling with tiny snaps or pulling on a tight fishtail evening dress over those curvy hips.

I have to insert here that my dear mother made one giant mistake in her life, and I hope she still regrets it.

Somewhere along the line she decided we were too old to play Barbies so she gave away a highly developed now vintage collection that I am sure, if she kept it, would have bought us a condo in Florida.

I am still most mad about that red velvet flared coat with the matching pill box hat and matching shoes and purse. If I had a real sized outfit like that I am sure I would wear it every day and was confident when I was eight that I would grow up to do just that.

My daughter had her Barbies and inherited her mother's love of accessories. That aside one of most exciting moments of raising the current birthday boy was when, as an infant, he once opened his mouth when I was changing him and stuck out his little pink tongue on the end of which was a perfect little Barbie doll champagne glass. We had been wondering where that had gone.

Barbie doll clothes are the answer, a fairly realistic answer in my view, of what to do with the left over sock wool.

See I have already started.

Through Raverly I have discovered a completely out of control Swedish site of hundreds and hundreds of free Barbie knitting patterns.

Check out the accessories page.

I decided yesterday to start sewing again essentially so I wouldn't lose my mind.


With this crowd no explanation necessary.


I wanted to just have a hour long easy project to do that would get me at the machine watching those lines of stitches form fast without a pattern or a lot of intellectual effort.


So I made up an apron from a random yard of cotton that I can't even remember buying or for what.


I didn't have enough for pockets which was too bad, when I have an apron on I pick up pins and needles that seem to run around on the floors around here, and I sort of pleated the neck straps and the top of the bib so it wouldn't gape.


See even aprons have fitting issues.


I tried to disguise this a bit with a foot of lace I will never use for anything else and a big floral button in the same category.


I don't wear them as a political statement in solidarity with generations who did Women's Work, and looking around at the blogs I certainly don't wear them because of my alligence to the role of Submissive Wife, a concept I don't know much about and am not going to be exploring.


I wear aprons, to cook, to eat spaghetti, to clean, to wash the dog, because I am really messy. Sometimes I wear them in the sewing room when I am dressed in a dark color and sewing something with threads.


And there was that time in a former life when I tore down to the Legislature to a press conference I had organized and whipped of my coat, and there I was wearing an apron.


Of course the thing about aprons is that in their role as spill catchers they get kind of messy.


So a person needs a bunch unless you want to walk around your house in the stained version of some flasher's old raincoat. I have been meaning to make a few aprons for a while and for that reason, but since StyleArc doesn't have an apron pattern, and neither does Claire Shaeffer, I haven't got around to it.


But this seems like a current situation relevant project.


So here I am in the first iteration as non apron sewers say. I had a lot of fun making it.


And now I can say I am back on the horse, or in this case the pony.


More of these to come I think. 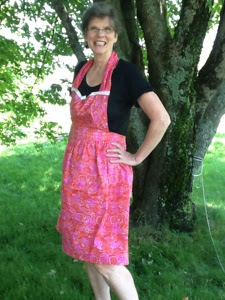 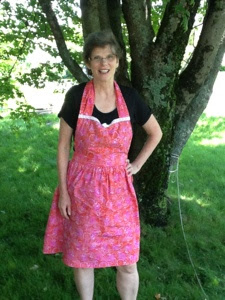