If you had told me one long year ago that I would be making Christmas masks for my family to keep us safe I wouldn't know what you were talking about.

Wearing masks has become second nature to us, and the kids put them on and never mention it. It has become part of their lives.

I decided however that something a little festive would be appropriate. So, after having made a gazillion masks when all of this started, I decided to find some Christmas fabric and make a few more.

I also decided I wanted to use a different pattern. Like other mask makers will understand mask making is not a one size fits all situation. The ones I made for my husband and I were fine, but too small for my brother-in-law's broad face. And I did notice that my standard pattern tended to slide down a bit on my husband's long Acadian nose. And of course there really isn't a one pattern for children because children, like everyone else, come in different sizes. I needed some style options and a good, more detailed size range.

This is where Jalie's new Flare mask pattern caught my eye. Here's the pattern cover: 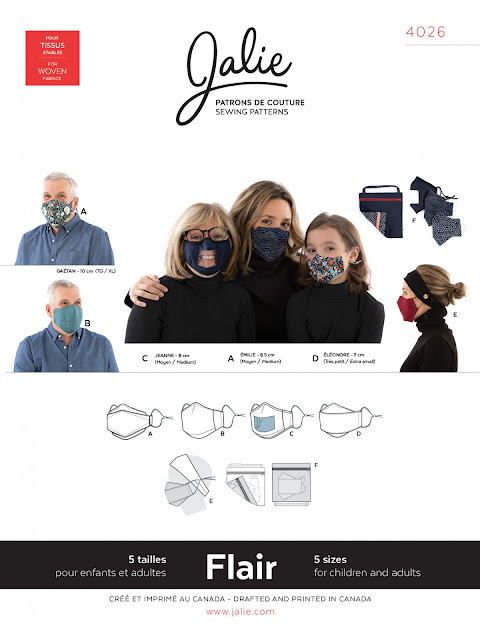 I decided to do version D with a piece to go under the chin and shaped around the nose, which has a pipe cleaner wire in it. I made the small, a sort of medium small, the medium and large versions.

Here they are on us all, myself, my husband and some of our grandchildren: 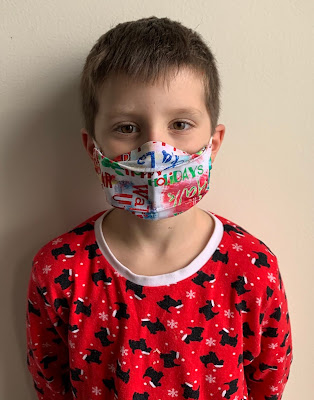 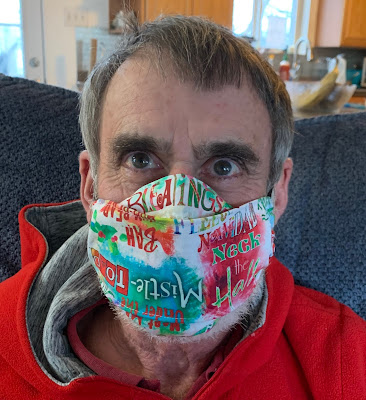 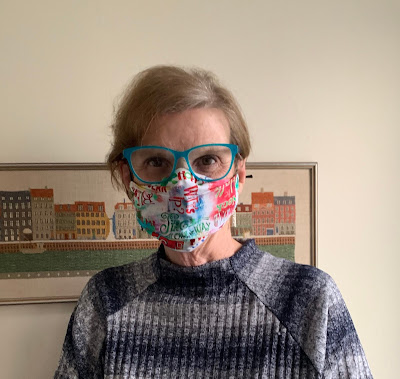 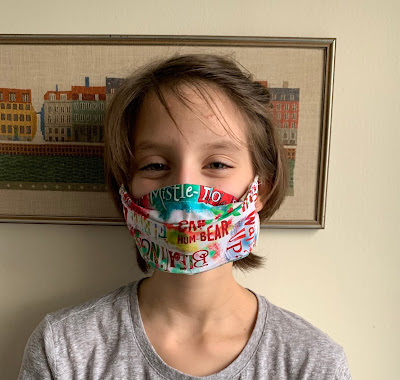 I figure if you are going to wear a mask this Christmas might as well make it cheery!

I am not as smart as I think I am

I have been sewing if not daily, at least a couple of times a week, for fifty years. I started very young making my own clothes (what was my mother thinking?) I wore some strange outfits to school when I was getting going though I can tell you.

However the end result of all this sewing is that I have done so many things over and over again I have sort of got used to disregarding the instructions.

I am so smart after all.

In fact I had a standard practice of throwing out the Big 4 instructions as soon as I opened the envelope - a practice that annoyed the hell out of the sister who used to borrow patterns from me "Just forget it. I would rather buy the pattern myself, there are never any instructions in them."

In the interests of full disclosure and transparency I have to tell you that this assumption of competence is not always a great practice. I am horrified to realize that I am, in my sewing, on the verge of becoming, in some areas at least, that most dreaded of mature people - the one who thinks they know everything because they have been around and around the block many times.

I am reminding myself of those women I used to sometimes run across in sewing classes who would announce they had been sewing "for 30 years and this is how I do it" even if how they did it, like never changing the needle even when it sounded when it sewed like a Sherman tank driving on a metal road, or edge stitching not on the edge but always, always a presser foot away in every situation, wasn't really best practice.

And too the young and enthusiastic new sewists in my classes, the new who were wide open every scrap of information they could collect, and were always so willing to try and try again until they got it right, taught me a real life truth - just because you have been doing something for a long time doesn't mean you have been doing it right.

In fact it is entirely possible to do the same mistake over and over for 30 years, if not longer.

Once again life if it doesn't always imitate art, certainly does seem to imitate sewing.

Now this profound statement leads me very naturally to a discussion of shoe bags.

Last night I reviewed and posted pictures of Jalie's Nordik slippers and shoe bag. I was pretty interested in how cleverly the slippers went together and when I got to making the shoe bag, well after dinner, I thought I could just look at the pieces and figure it out.

It was getting late.

The dogs were agitating to get to walk down the hall to the bedroom and the cat was agitating the dogs who had no interest in joining her for a top speed circuit around the house.

That's my defence but there really isn't any. Not from someone who knows the route around the block this well.

However my sewing conscience is pretty active, it has to be, so when I woke up this morning I decided to actually check out the instructions just in case. Of course I had missed a critical step.

Rather than simple sewing around the rectangle shape which this smarty pants assumed she should do, I should have folded the side seams in 1 1/2" at each end and stitched over them like this, like I did this morning: 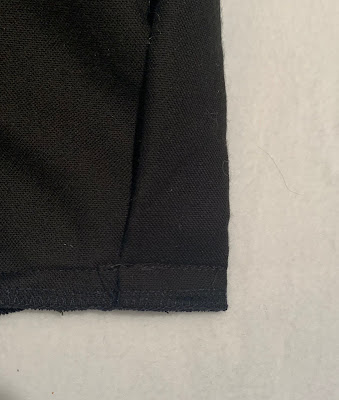 This is such a simple manoeuvre, I have done the boxed corner thing many times but never this, but it gives a nice pleat and shape to the sides of the bag- more three dimensional: 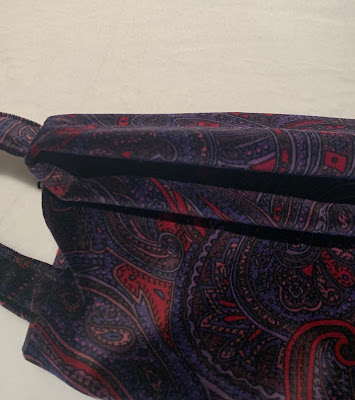 This completely changes and improves the look of this bag. I advise you follow the instructions on this one. 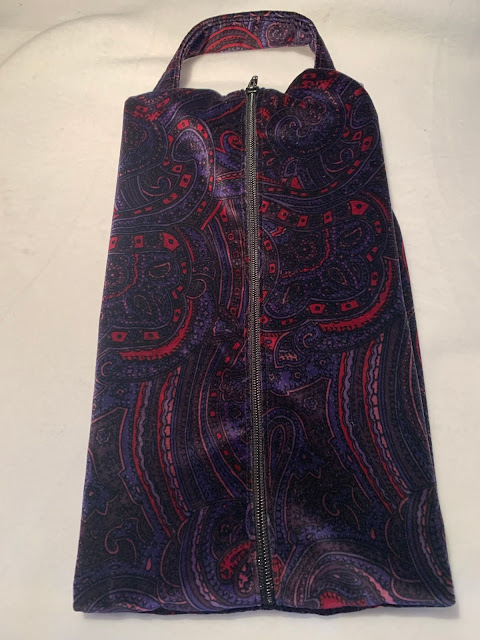 This whole episode has reminded me one of the main reasons I enjoy sewing with Jalie (apart from the huge size selection which is important for someone like me who sews for an extended family) - I love the little technical tricks.

So I learned something new today.

This little episode has also made me consider the role of long standing assumptions in life. As I go about my business today I am going to reflect on other areas where I might have rushed to judgment, thought I already knew something but didn't, where maybe I haven't been as smart as I thought I was. It seems to me that long term output might inhibit the occasional interesting input.

So I have a question. Have any of you had an experience like this? In any area. What sort of assumptions have you revised lately?

Every once in a while I feel Jalie comes up with a pattern that seems to me to be particularly Canadian. The new Nordik slipper pattern is one of those: 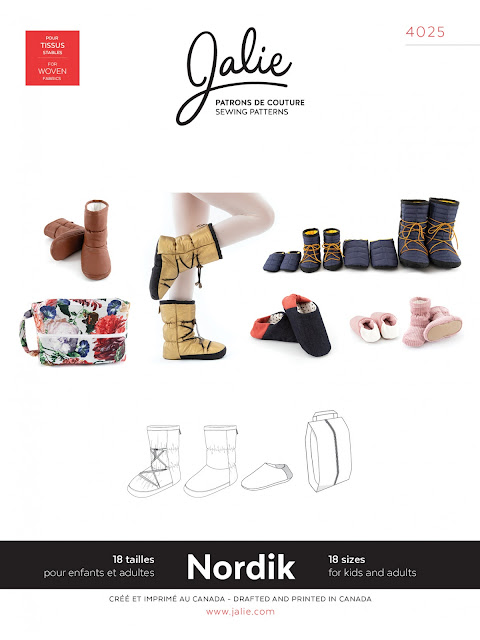 This pattern is all about cold feet and about taking your shoes or boots off as soon as you go into a house.
If you grow up in this country you are well used to the feeling of cold toes. How many of us walked home from school in the winter with frozen feet? How many of us skated when we could no longer feel our toes? The idea of getting inside and thawing out/warming up are real and very familiar.
That's what this pattern is about, both the jazzy boots and the more modest slippers that I made. Think of this footwear as sort of a sleeping bag for your feet. You will need some lofty batting to interline them.
This pattern also contains a shoe bag, a really nice simple make it in 15 minute type pattern. That's the other thing. In Canadian houses it is considered good manners to take off your outer footwear, shoes or boots, as soon as you enter a house and to leave them at the door. If someone walks into your house and keeps their shoes on (being Canadian you are too polite to say anything) you sort of wonder where they are from.
It is common, in fact it is usual, to have say a fancy house party and to have everyone all dressed up and still have them take off their shoes and for everyone to be sitting in the living room in their sock feet. It's like there are no fashion requirements below the ankles. Every entryway is piled up with all the shoes and boots and you get used to climbing over those when you come in the door.
This is why this pattern also contains a shoe bag. If you want to have something to wear when you arrive at a house you might want to bring some indoor shoes or, in the case, some slippers.
Puffy slippers.
I had a lot of fun making these up. Here is my version, to fit my feet. The pattern has you measure the length of your foot and there are multiple size options, from a child to a large adult. This is yet again another of Jalie's big family size range patterns.
I will probably be making the boot version for myself for wearing in the RV when we go off not this winter but next. We usually head south in January, and although the RV has a great heater the floor is totally uninsulated. Doesn't matter how many rugs we put down I always feel as if I am walking or standing on an ice rink until we hit the Mason Dixon line. These slippers will be perfect.
For the time being for my winter in the house this year I decided to make the simple slipper version. 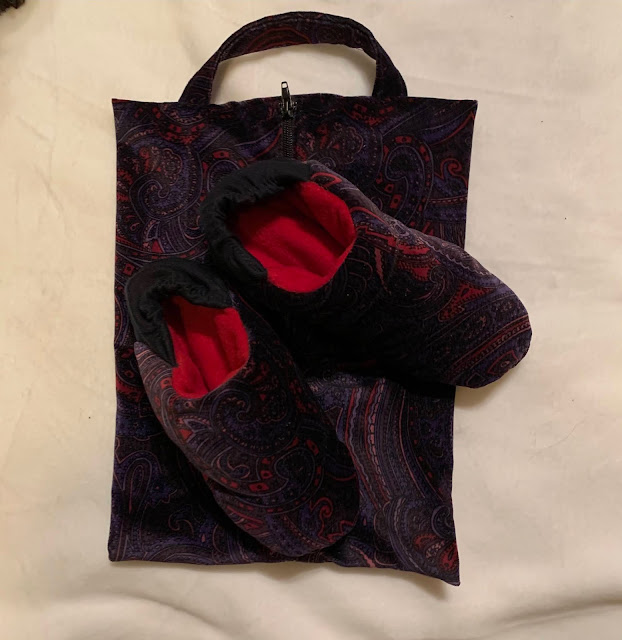 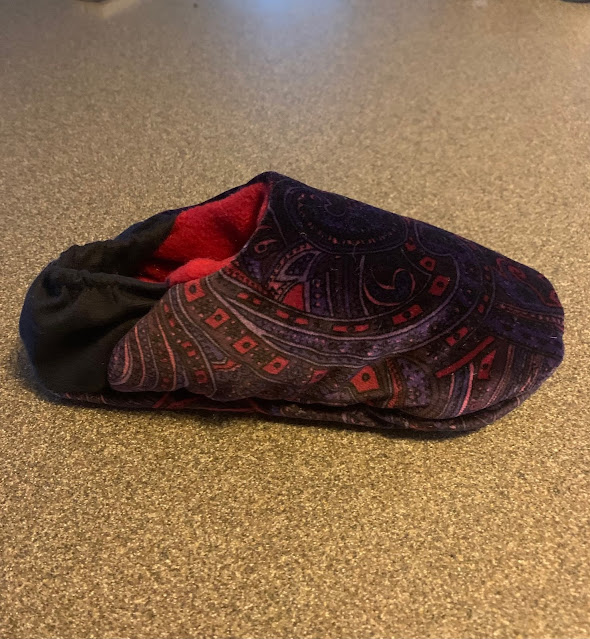 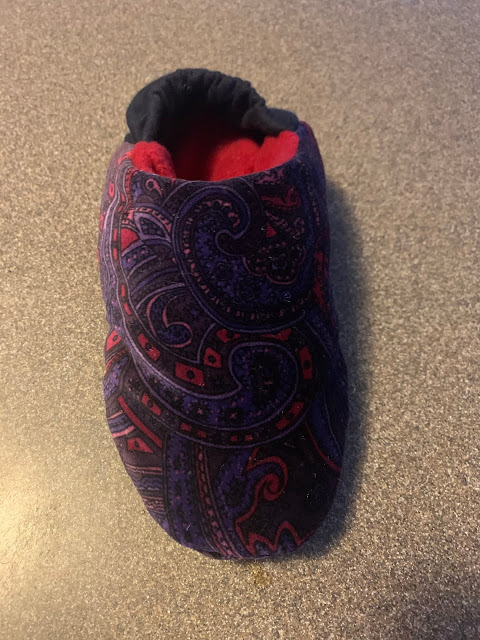 This is a really interesting pattern in that it is made from woven fabrics with a back insert from ribbing with a strip of elastic inside that. I used some cotton velveteen I had and some fleece for the lining. Although I like the way these look in retrospect I would have been better off to use something lighter to keep the seams smaller. I have seem some of these made up in quilting cotton and that, or flannel, would be ideal.
I am not entirely happy with the batting I had on hand. That pattern calls for 1" thick batting and what I had was loose, almost like fiber fill in sheets. I think that a proper bonded batting of that thickness, or even two layers of something thinner might have been nicer although this did have the nice fluffy look that pattern aimed for. Here is what my own batting looked like zig zagged to one piece: 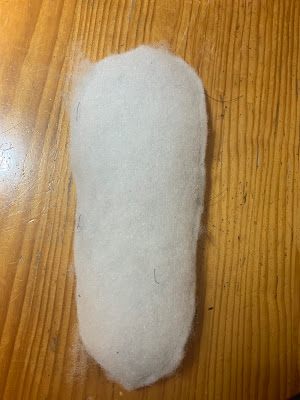 In construction I found it easier to use clips than pins too. 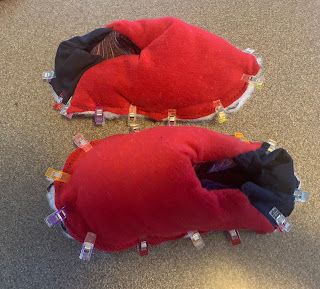 With my photographer out of town and neither the dogs or the kitten all that handy with the camera I am unable to show you anything sensible of the slipper on me. That said I want you to see how neat the ribbing at the back is so here, sort of, is that: 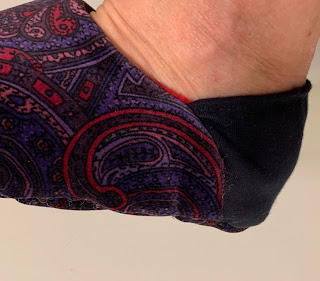 All pretty clever and extremely cozy and comfortable.
And I have to say that the shoe bag is really simple but very nice, I am definitely going to be churning a few of those out before the holidays too.