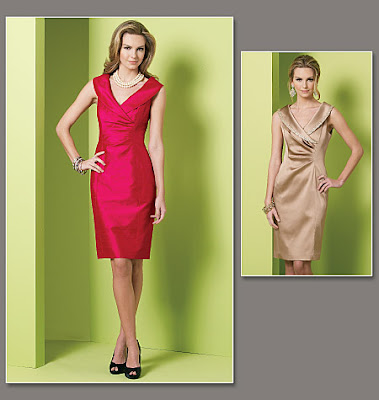 I have decided I will go to the event with HRH and need something to wear.
Of course.
My stash has increasingly become a sort of primeval bog that spits up artifacts from the past (you know those movies, those black and white shots of quicksand with chair legs and things bubbling to the top, or maybe only I saw that movie when I was eight). Well this week while searching for something else it spit up about 5 yards of merlot coloured silk shantung, and I looked at it and thought "party dress" so I RSVP'd.
Now I have been thinking about patterns. I note that my fashionista diva Erica B has said good things about Kay Unger and since Erica always looks like she would be up for cocktails with the Queen, and dressed perfectly for it, at anytime anywhere,  I took that as good advice. So I did some searching and found this great dress and review by Victoria in Savannah so I decided to turn my dark red silk into a Vogue 1182. I had already decided against an LBD because guaranteed that's what everyone else will have on and if I do some colour there is a chance that this dress could be wedding or party useful for some other occasion in my action packed social calendar. You know those events once or twice a year I go to that don't involve Rascal.
Of course this is going to call for a muslin and I will start that this weekend, putting aside all my numerous other more mundane projects. With the pleats and everything this looks a like complicated one for alterations.
Now I have a question for you.
Do you too have the most trouble when coming up with the best pattern and idea for special events? I can sew all sorts of everyday clothes and do just fine, but throw a New Year's Eve or a big party, or even a wedding at me and I just freeze. Maybe it's the pressure of feeling you have to do your best work and make all the right choices, maybe I am not enough of a fancy dresser (I lie I love to get all dressed up, just can't decide what to wear).
I rarely make a good outfit that I am totally happy with but I have hopes for this one. I feel I am sort of due.
Posted by Barbara at 7:18 PM 2 comments:

Email ThisBlogThis!Share to TwitterShare to FacebookShare to Pinterest
Labels: Vogue 1182

The Queen and sunscreen

A few days ago I had a bump burned off my nose and was sent home with instructions to stay out of the sun, wear hats and cover up. This was hugely dramatic news for me because of what it meant to my summer wardrobe. I went out of course and bought 5 hats but realized that hats, particularly the big ones, don't go with much. So I am thinking more summer dresses and of course gauzy type things. Yesterday I watched CNN and the oil spill and of course the reliable stash spit up about 10 yards of white crinkle cotton (amazing what I have literally stashed away around this house - this stuff was tucked away in a dresser behind the furnace) so I cut out a long sleeved sort of caftan type dress and then a top and pair of drawstring pants (don't laugh but this is my wearable muslin of my Jalie pajama pattern for me - I made DD a pair for Christmas and on her they were a great hit). It will be interesting how I get some style going on this.
Yesterday we went to our local swimming club (three outdoor salt water pools, that's where all the kids have learned to swim) with Miss Scarlett and all I had to wear was the hat, a long sleeved floral patterned blouse from whenever, and some loose linen pants. My DD said I looked like a some crazed gardener - not my look - so I have to get sewing.
Actually to join them yesterday I was a no show at the Lieutenant-Governor's by invitation only garden party which I suspect a former boss got me invited to (he's the premier - for those US readers this is the same as the governor- he always remembers me and I think sometimes wishes I was still there working myself to death for him) but I have my priorities and that Miss Scarlett is pretty interesting. The L-G is a bit of a character though and it might have been fun. One of the things she did when she became the Queen's rep in Nova Scotia was to get her own coat of arms made and at the top of it she put her house cat, who is her best friend. And I wouldn't joke about a thing like this, I mean if it was me I might work Mr. Rascal into the heraldry, as significant as anyone else.
However in the mail this morning I have another invite to a reception with the Queen when she is here the end of the month which I might go to. I hear she is large busted and always, always wears princess seams and essentially the same TNT. I would like to know if that is true. The invite says "semi-formal with decorations" and it's for 8:00.
I suspect what they have in mind as decorations aren't wearable art, which actually was the first thing that popped into my mind.
So if I decide to go what should I wear? What would you wear?
I am thinking probably not the Jalie jammies.
Posted by Barbara at 9:19 AM 2 comments:

I have been making a real point in the last month about enforcing more dedicated sewing time, even if it is sewing on a button, every day.
You see I am thinking about this transitional stage of my life and looking back I realize that the times in my life when I have felt most together and content have been the times I have done a lot of regular sewing.
It's not just about the clothes, there is something else going on. I speculate that if you have the creative need and it doesn't have an outlet it sort of backs up in you and gets a little toxic. I wonder if doing something for yourself when life seems so much about doing things other people want you to do is somehow centering. I consider the possibility that with our busy lives when it is hard to feel much of a mastery at anything, if turning to an activity where you really can see your skill produce something beautiful is just necessary.
Or maybe it's all about something that I don't really understand.
What I do understand is that it does me good and some times call for the deliberate seeking out of the things that do you good.
I know a yoga teacher who does her positions and stands on her head like a religion every day and it's called doing her practice.
Well sewing is my practice. And that's just about all I can say about it.
Posted by Barbara at 11:26 AM 3 comments: 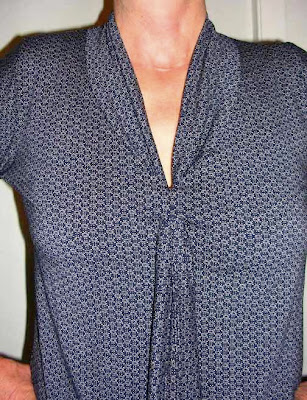 One of my most annoying and tiring traits is my difficulty in letting things go if I think there is anything else I can do. In fact there have been moments when I have distinguished myself by an inability to recognize when a particular investment is no longer giving returns and that it would be best to give up.
What that looks like when I sew (apart from getting up in the middle of the night to take out a sleeve that is bugging me and put it in again) is that when I make something I like and I wish I had done one little thing differently is that I have to make another one right away and but this time make it right.
That's why I had another go at Jalie 2921 and this time stretched the collar between the shoulder seam so it would cup my neck but keeping the sides of the V neckline 1 to 1. This actually meant shortening the collar pinned between the two shoulder seams by a full 3" but I am so happy with the result.
Much more scarf like and a nicer fill-in of the neckline IMO.
I can tell already that this is going to be a favourite shirt.
Posted by Barbara at 8:17 PM 1 comment: