And here at Santa's workshop

Tonight my husband asked me "why are you doing Christmas stuff, lots of time left."

This just expresses the Great Gender Divide in a nutshell.

On one side are those who cook an excellent turkey and figure Christmas has been accomplished. You know the same crew who give people the microwaveable socks they picked up at Canadian Tire at 5:30 December 24th.

On the other side are those who consider the holiday season as sort of a personal version of the invasion of Normandy, with pins in the maps, troop movements to be planned for, ambushes to be anticipated.

You know which side I am on.

With family spread around and with my idea that everyone needs at least one home made item I have been at this for months, mentally at least.

So for the last few weeks my sewing has been confined to hopeful cutting and bagging of things I am going to do once we hit the beach head. 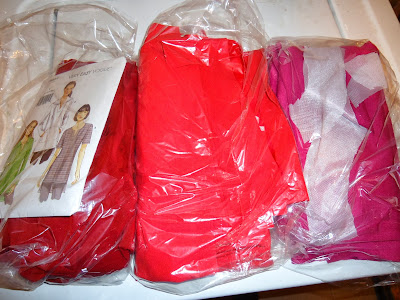 Most of the rest of my none job time has gone to doing things I don't do all that well, namely knitting and crafting.

My knitting is better than my crafting, but nowhere as good as my sewing unfortunately. Of the many projects on the go in more or less every room of the house I have a chunky wool shawl lying semi blocked on a towel in the kid's room. Hopefully it will be dry by Christmas. This is for my daughter who mentioned last winter that she wouldn't mind something to keep her warm in the evenings in the family room. 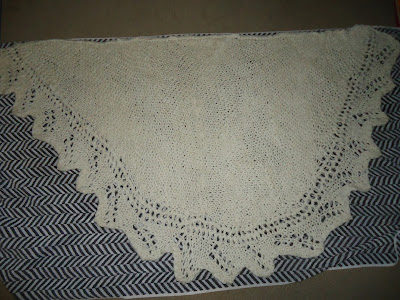 Even more of my time has been spent on the Barbie doll house project for the little girls. I have a good idea that I am not going to get the intended plastic canvas needlework living room set done in time so I have been putting together some things morphed from Value Village knick knack stuff.

I am a really horrible crafter actually. I might as well be using that glue gun with my feet and my hats off to any really crafty folks out there with both taste and manual dexterity. I am doing my best though and this is being done for the little girls who are enormously accommodating and positive.

These are of course the same characters who say things like "Babs you look like a princess" when they see me in the morning with my hair vertical and my bathrobe on before I have had my coffee. I mean kids are the best.

So after that intro here are some shots of my furniture experiments, with designer notes: 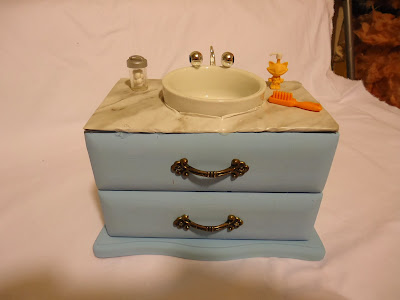 This is supposed to be a bathroom vanity. I made it out of a mini jewel box that I took the lid off of, and painted, a cardboard counter covered clumsily with marbled adhesive shelf liner and a china ramekin I got at the grocery store in the dishes section. The faucets are beads and the tap is the semi destroyed lobster claw fastener I got a Michael's in the jewelry department , all inexpertly glue gunned in (that explains all lumpy bits). I am accessorizing with a mini brush and soap dispenser and a tiny bottle of cotton balls - all part of a grab bag of Barbie junk I got on eBay for $5.00.

The bathtub is the china top of a butter dish with the stick on felt feet I would be putting under things I put on the end tables in the living room if I was a good housekeeper. Same deal with the tap and faucets.

Here is the bed. The lid of a card board box with feet from small craft wooden spools and the headboard is a decorative picture frame also from Michaels. I made the mattress and pillows and no I didn't knit the bedspread for the bed - this was something I found at the bottom of my failed knitting project box - I thought I was going to knit a summer purse but stopped doing it when I realized that was a dumb idea. Fortunately I kept the piece and added some borders to turn it into this bedspread. 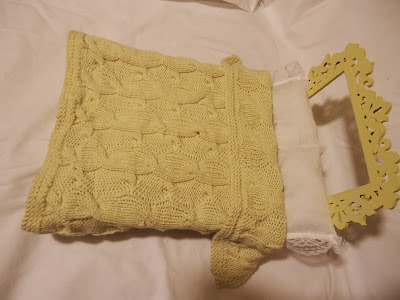 The colour scheme of the bedroom is based another jewellery box I found at Value Village that I think looks like a pretty good wardrobe. I think I got this for $3.99. 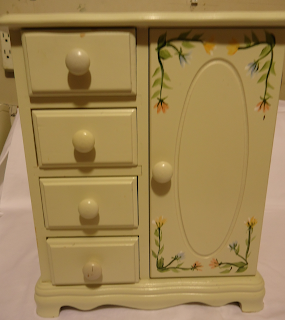 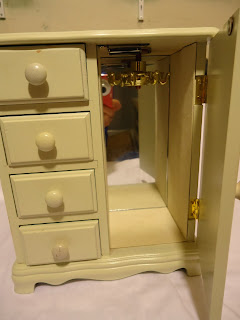 I had big ideas to fill this up with handmade Barbie doll clothes but that's not going to happen.

BTW I have a bunch of vintage Barbie patterns I got at yard sale and looking at them I am wondering if Barbie has put on weight since then. Seems the new Barbie and Ken I have are looking a little more muscular than the ones I played with. Will I have to flat pattern measure? That sounds horrifying.

Finally here is the living room furniture - built on a set of wicker I found also at Value Village. I realized that I needed to have something in purple or the girls wouldn't think it was fancy so I painted the wicker purple and glue gunned little pillows in place. 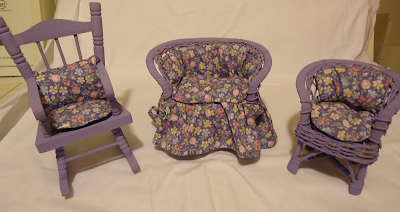 So tomorrow we are going to work on the actual house part and I am going to attempt to Modge Podge some scapbooking paper to the walls for wall paper. I am fairly stressed about that prospect. Hope I can sleep tonight.

Now how are your own holiday preparations going?
Posted by Barbara at 7:34 PM 21 comments: