I have had to let the news of David's passing sit for a bit before I could write about him.

David was a good friend of mine. We knew a lot about each other and I could tell many stories. But it seems to me that so much of that is personal now.

I got to know David when I first wrote for Threads and he was my editor. He was a wonderful editor, the best that magazine ever had.

One day, about 20 years ago, he called me. "I've just read the Shipping News and I am going to come and visit you."

Now of course that book was written about Newfoundland and a long way from my little house in Halifax but he came anyway.  I moved one kid out of a bedroom and sent him into the bunk bed with his brother, and David stayed very happily in a boy's room and slept in a narrow single bed.

He was the kind of person who spoke to children as if they were adults. My three kids really enjoyed having him here. He just fit right into family life. We talked about everything.

Over the years David and I kept in touch and saw each other in person when we could at various sewing shows.

We used to write each other about our schemes and plans and sometimes our worries. He was the kind of friend who if he read that something was bothering you in an email would just phone you up to discuss right away rather than write back.

He had of course the most wonderful voice.

What I want to tell you about David Page Coffin is this.

He was the most genuinely authentic person I have ever met. He was exactly who he was, author, sewer, musician and painter, and there was not one thing about him that was not original and authentic.

I also think it is important to understand that everything he did was motivated by his generosity to other people. He always had time for you. He truly respected everyone he talked to. All his writing and teaching were motivated, I feel, not simply by a love of the craft but by a love for people. There is a big difference there.

DPC wanted to share useful things he figured out in case someone found it helpful. His work was entirely original and self-discovered, accurate and true, and he wanted to share it.

Over the last few days I have re-read some of our emails. The last one I sent, at the end of February, was never answered.

Don't fall over, I am back

Yes I know this space has been quiet but I am getting back in the groove.

The last month or so has been very busy. I am back teaching two online courses for the university this summer, and after having been away from it for a while now, that has meant re building the courses.

I have also been doing the proofs for my next book, Stressfree sewing solutions, due out in August. That book was my pandemic project.

I have also just released a second video in my knits series, this one on more advanced techniques, including an easy way to do a foolproof polo knit type placket that I worked up lately. I am pretty pleased with how easy this technique is. I will be interested in some feedback on it.

And of course I have been sewing.

I made a couple of skirts for my sister who has major cabin fever in Ontario, three pairs of maternity pants and two dresses for my niece, sweatshirts for my son-in-law, and a few things for myself.

I did a guest post on the Fabricville blog on sewing with bamboo, and you can read that here.

Here, randomly, are some pictures of what I made for myself this last month:

The free apron pattern from Tessuti. I made three of these. Note follow the instructions for the top part of the bib where the straps attach. Like all of Tessuti's patterns although they look simple there are usually a few twists in construction that are a bit original but work out well. This one was my first and, being a know it all, I didn't follow the instructions and as a result the strap attachment is subpar. The next two versions were much better. 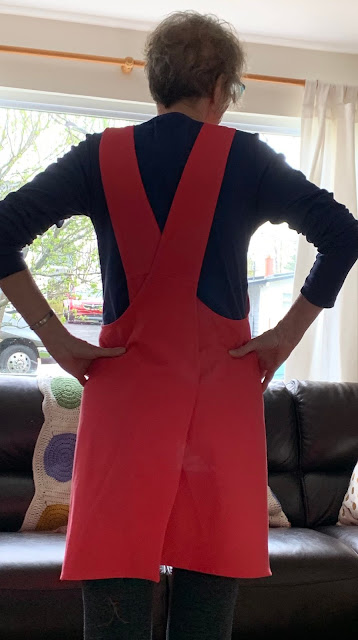 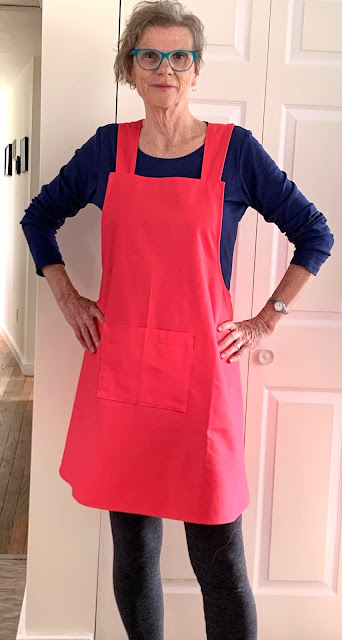 And finally here is a blouse I made from an Ottobre magazine and the Jalie Renee pants. I did a FBA on this blouse but think I want to go in and cut it again in a larger size anyway for more back room, although this is certainly wearable. I also think I need to do a straight shoulder adjustment, because that's exactly what I have, so the collar lies a little better. To be continued. It was time I revised a TNT shirt pattern or two.

So that's my update.
I have a bunch of more family sewing I want to do, plus some more things for myself for spring/summer.
Hopefully I will be able to travel to San Franscico in August for three weeks to see my kids there. It has been well over a year since I have seen them and it's killing me.
Talk soon.