I think it can be established right now that these days are not the days of things going according to plan or on schedule.

Myself I have sort of dropped under the radar in my house with the two dogs and the cat doing some Christmas sewing. If you are a member of my immediate family or the parents of those units, you might not to want to read any further.

Surprises are surprises after all.

So in no particular order this is what I have been up to. I used this pattern to make my mom three new tops. I had made her some pants which I sent her a while ago and wanted to her to have something to wear with them.
My mom is short and had a very specific criteria for what she likes in tops. A V-neck but one with a placket and 3/4 sleeves.
I had been searching for the right pattern so was so happy when Love Notions released this last month.
I made her three. They have all gone in the mail early last week but before they were wrapped and went out I took a quick back of the door picture of one of them. I was particularly delighted that my sewing room was able to spit up buttons that were red with navy centres - probably why I took a picture of this one. 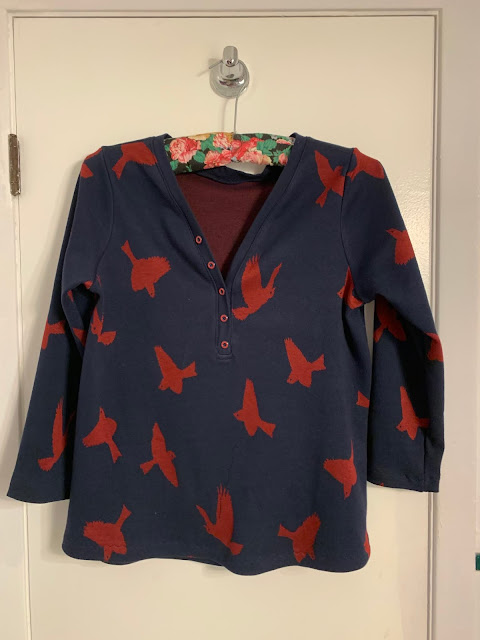 A few technical notes. First I should say that the buttons are faux - they sewn right through the two bands below the point where the V opens and along one side of the band above that. There are no buttonholes to make in this top.
The fabric was a neat cotton/poly type ponte left over from a dress I recently made. (Which reminds me that I need to do a post on that).
The pattern instructions were good and I followed them with one change.
I am sure you are all able to spot the potentially tricky part of this top. The bottom of the placket right?
The instructions are to slash down the centre front of the front top piece to the marks for the bottom of the placket, and then out to the sides of that box: 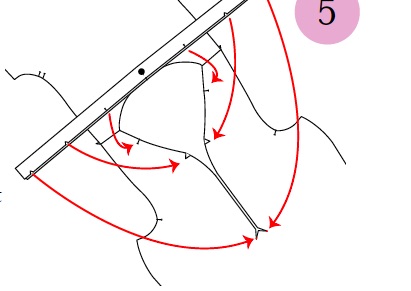 Next the band is then stitched to the sides of the slash but not across the bottom. 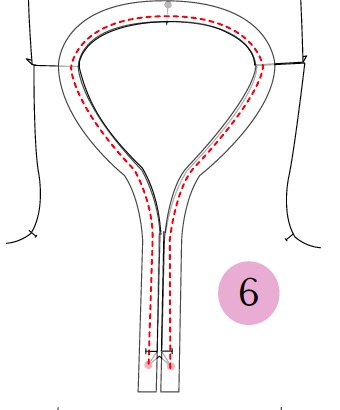 To finish the bands are folded over each other and the bottom of the box is stitched closed through all layers- both bands and the triangle at the bottom.
From having done this method before I knew that stitching the sides would be tricky with small seam allowances, particularly in a knit.
I also have a life/sewing principle to whenever possible Clip to the Stitch not Stitch to the Clip!
The end result is exactly the same but clipping to your last stitch is about 2000% easier than trying to precisely stitch to a pre-existing clip.
So when I made my tops I did not slash the front open as directed but instead pinned the bands, raw edges to the centre front, stitched them down and then slashed open the front and down to the last stitches at the bottom of the box. From then on I just continued to place and stitch down the bands as per pattern.
Of course since I had my Christmas sewing skates on I didn't stop long enough to photograph my method, so I hope the words make sense.
Also up this week were the four pairs of Nova Scotia tartan polar fleece footed pyjamas from Jalie: 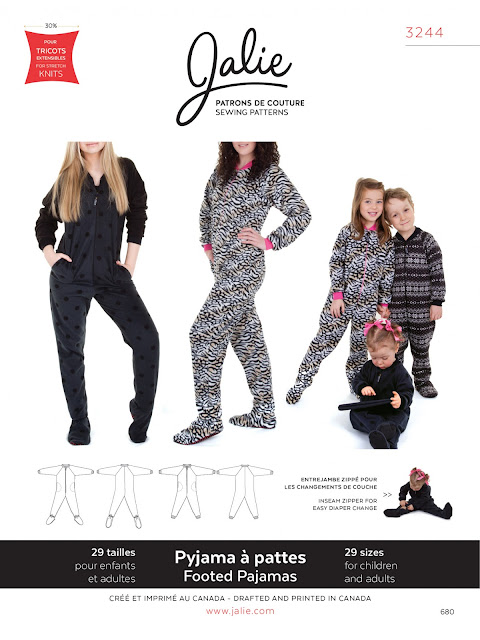 I have already made and sent a pair in size 3 to California and made four more pairs here, three for my daughter's children and one for my step daughter's son. I like it that wherever the smaller members of the family are they can all be united in something at this time, even if it is my eccentric idea of the year.
I also chose Nova Scotia tartan deliberately because I am so proud of the caring, supportive, and responsible way this province has dealt with the virus. Our chief medical officer, who has called all the shots on our response, has super hero status around here - no one in hospital and only five new cases, all related to travel reported today.
I made these pyjamas in three different sizes but this is one for the oldest child held up by my long suffering husband who was in the middle of a home handyman project when I made him stop and do this: 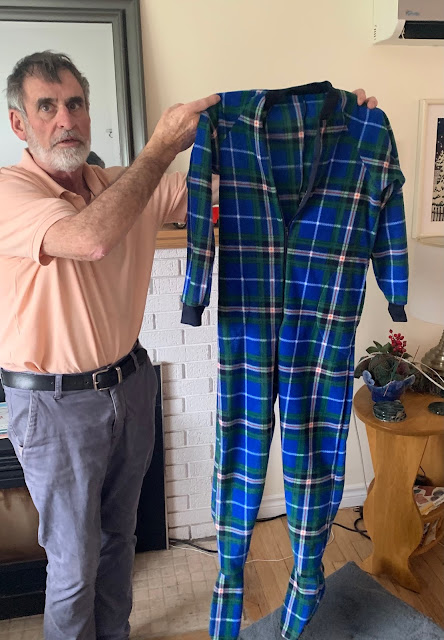 And finally I have to share pictures of my sewing partner, you know the one who stands behind the machine and puts a paw through to touch the presser foot in the middle of a seam - not something that makes for straight topstitching I can tell you: 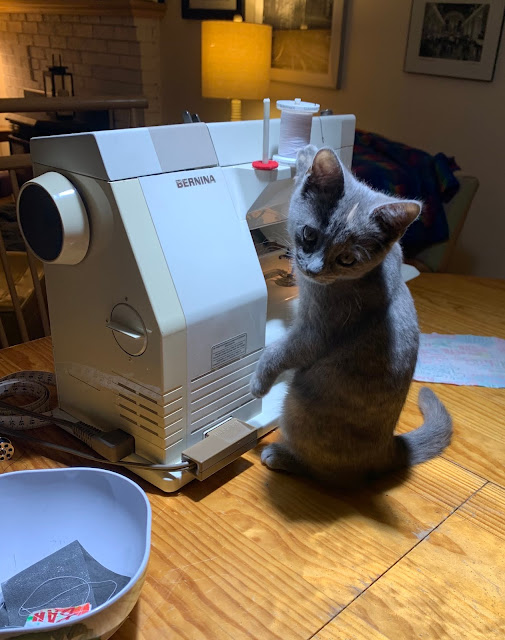 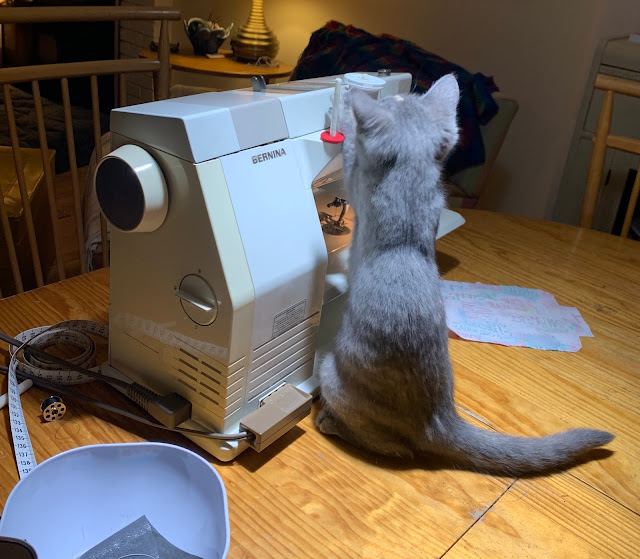 And finally some Christmas shots. One of the animal we were worried was going to be intimidated by the dogs: 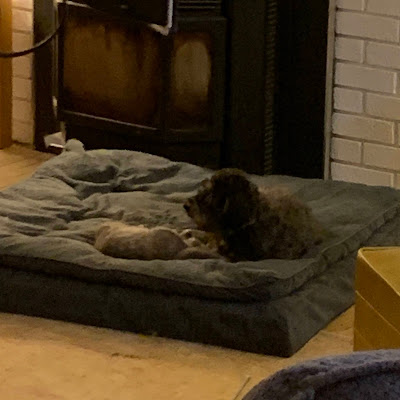 And finally another shot to illustrate why I seem to be losing the ornaments, one by one from my tree (they are being stashed all over the house) despite the excellent chair tree guard I erected: 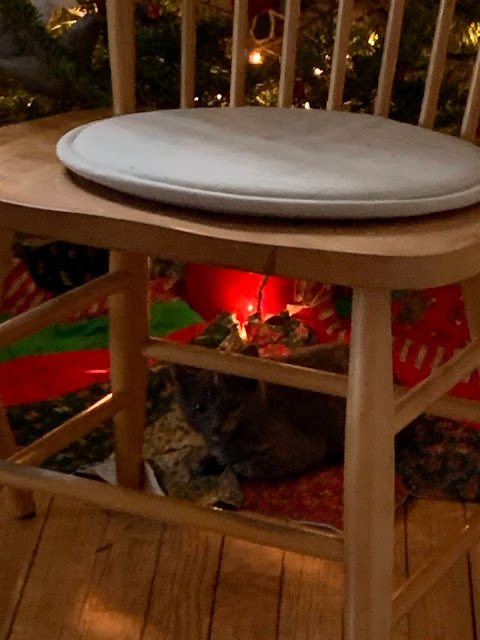