A sewing question for you

Next week my husband and I are going to Florida, St. Augustine, for a month. We are leaving Easter Monday.


He has worked 17 months more or less straight and has earned this. We have rented a place there and we have relatives rotating through so we can catch up. We always have family involved in our holidays. I think DH could lie on a beach and read a book and relax for about 10 minutes. Me, well I was about 35 before I was ever in a room by myself so this feels normal to me.


A month is a fair bit of time and I am not going to be talking and eating all the time. So of course I will be doing some sewing. That, and catching up on my neglected Pattern Reviews.


OK so this is my question.


If you were going away for that long what would you take with you to sew?


One or two complicated designer patterns that you have been meaning to do but haven't had the undivided time to tackle?


A TNT that need fine tuning?


What should I pack?


What would you pack?


BTW if anyone has any North/central Florida fabric store suggestions please let me know. One of the surprises my husband had for me when he came home from Tennessee was that he had bought a motorcycle. I can think of 101 reasons why this is a dumb idea and I have shared those.


He has countered with the promise he will drive me to any fabric store I want on the back of that thing. Carefully.

I am the kind of sewer who is often frustrated by all the things that get in the way of sewing. Cooking is one of those things. Unfortunately I love to eat and have the appetite of a long haul truck driver so this is a problem. DH does a lot of the cooking, but sometimes he is busy and it's up to me.

Which brings me to fish.


Well, I am amazed by the number of people who tell me they don't eat fish. It's sort of like the folks who say they can't sew. I mean try it, you might like it.


However I realize why so many people think they don't like fish. So often it's not cooked in a way that anyone would like it. I know what this feels like.


I grew up in the Canadian prairies in a small town and I didn't see the ocean until I was 18.


So in my childhood fish was:
a) sardines in a can that were only interesting because you were told you could eat the bones which was not true of anything else they put on your plate
b) frozen fish and chips in a cardboard box which in my house meant Dad was cooking because Mom was out at Brownie night (do they have Brownies in other places? Junior Girl Scouts where everyone was a fairy or pixie or something - I dropped out)
c) something some neighbour brought back from a fishing trip that was full of bones you weren't supposed to eat and had to pick out which meant the meal took seven hours and essentially was still like eating a toothbrush- to the background noise of my mother telling stories of all the people she knew who had died "right there at the table" after choking on a fish bone. That is distinct from the ones in the family she knew whose "throat swoll right up closed" after they had eaten fish at some dinner party and were saved only by medical intervention by a doctor we knew cutting their throat open with a knife so they could breathe. (My dear mother nursed from 1950-1952 and has been discussing medicinal emergencies ever since).


So I wasn't much of a fish eater.


Then I married my husband who did not grow up on the Canadian prairies. He grew up in Nova Scotia and Newfoundland in fact in a family of superb cooks. I think his dinners were different.


So he actually knows how to cook fish. So it is succulent actually. Something that you would eat even if it wasn't one of those things you were supposed to be eating because of "10 healthy habits that could change your life right now" to quote Woman's Day at the grocery line up.


The trouble is that the way he cooks fish require thought and timing.


I will eat this but really, I have an invisible zipper that needs to be put in downstairs.


But I have found a way to cook fish that is fool proof and effort proof. 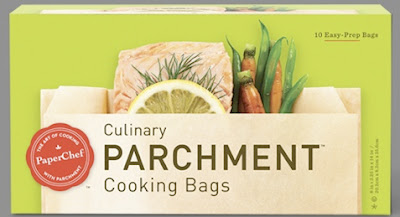 Here's how it goes:


4. Take fish fillet (in my case this was salmon from a huge monster my spouse brought home and cleaned up for me - I would just buy fillets at the store of course)


5. Put fish fillet on a plate and sprinkle with salt, pepper and onion powder and whatever else you are trying to get rid of. That 1/2" of Hoisin sauce in the fridge door, that end of ginger that is getting wrinkly at the back of the vegetable drawer. Whatever, people will think you are smart of you add anything.


7. To minimalize cooking dinner even more throw whatever fairly quick cooking vegetables you have on hand on top of the fish. Mushrooms, asparagus, stuff like that but not, say, carrots.


8. Cut up lemons or limes and add that too.


9. Fold under the open end of the bag and put the whole thing in the oven for 20 minutes.


Your fish will be perfect. Not dry and it will be very tasty.


It will look like this when you tear open the bag: 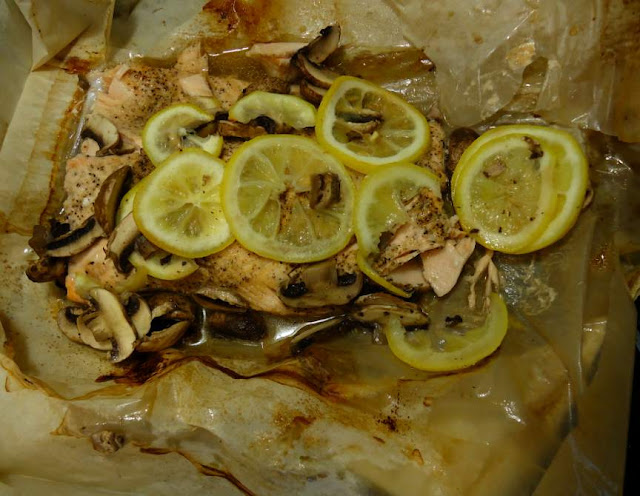 It will look like this when you put it on the plate: 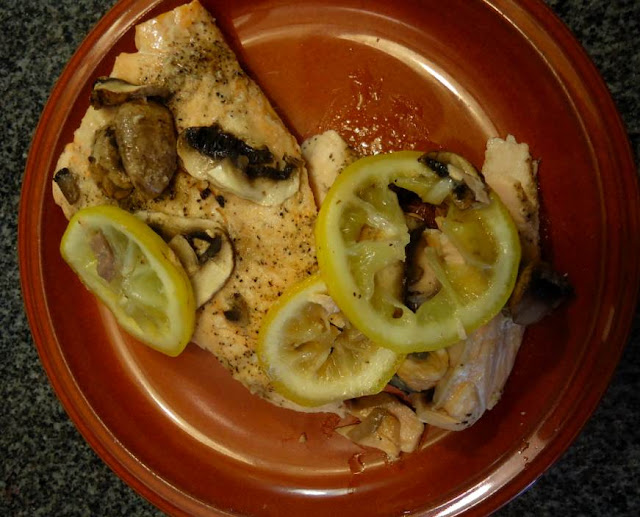 Less time than it takes to put in an invisible zipper.

Email ThisBlogThis!Share to TwitterShare to FacebookShare to Pinterest
Labels: cooking

I am not sure what this picture, taken in hurry as I went out the door, shows much but it is evidence that I am getting a pretty good basic fit from my software.


This is about as boring as a dress can get but I hope you can see that I was able to get a nice upper chest fit automatically really and the software put the darts in the right place, although I did have to length the bottom of the bodice dart legs because I am tall.


There is also a neat feature built-in that I used called "dart over-ride" this eliminates the little peak of fabric you get in the front of your armhole that tells you you need a FBA. The software picks this excess up and shoots it into the bust dart and the upper chest then sits flat.


A good start on some more basic patterns and kind of interesting to do.
Posted by Barbara at 8:00 AM 5 comments:

Pictures of recent projects on me

So this is what the latest stuff looks like on me versus the hanger. More tomorrow:

A pause in the marking and the eating.


DH's idea of helping me get my work done involves bringing me snacks. He's always perfecting something and wants me to sample. That man's breaded scallops are so light they fly around the room - until they land in my mouth.


I had a quick blog/fashion site surf to get me warmed up this morning and you know not all of it speaks to me.


I want to get this out there.


I am a prime time woman but I love fashion. New fashion. Sites and advisors that can show me how to wear beige pants, a white shirt (yes I know but the shirts are going to be cool coming out of this workshop), and a black blazer 47 ways don't do a damn thing for me.


I don't want a wardrobe advisor. I don't want a formula. Tim Gunn is a great and funny writer, but he doesn't live on this street.


You know I am not really all that interested in investment pieces that will last for 5+ years. I would be so sick of those clothes.


I don't want to mix and match.


I love dresses. I love colour.


And the clothes I remember best where the ones that made me feel sharp. I would rather look classy than classic. Sew something I have never made or worn before, than to fill a wardrobe gap. Learn a new technique, be pleasantly surprised by how a new style looks on me.


I want to keep getting cranky because it's just taking too long for the new season's patterns come out.


I have just bought some new Vogue dress patterns and am anxious to try them. Back to the marking and hopefully a photo shoot this afternoon.


Thanks for listening.
Posted by Barbara at 10:26 AM 2 comments: