One of the few words of wisdom I am able to offer my students is one of my own personal discoveries.

That is when you are learning new things your head actually hurts. It's those new neuro pathways being built (I actually have no idea what I am talking about but this sounds great), new muscle memory being laid down, and all that activity hurts more than say slumping on the couch watching Mad Men and wondering what kind of foundation garments Joan must be wearing.

I use this line, and wait to use it, when my students complain that something I am saying, or trying to teach, makes their head hurt. "Good" I say "Great. That means you are learning."

Well all those years of being a total smart ass and annoying year after year of undergraduates has returned to haunt me.

Karma and it's called golf and fair isle knitting.

The thing is, despite decades of my family insisting I have zero athletic ability (that was assigned to someone else and in my family once these things are doled out they are taken) I actually really like golf and am a not as bad at it as you might think.

Back and forth, one or the other. Never both.

This does not make me happy. And having my husband says things like "those are different shots you know" brings out my need to be a nice wife and not a person who, well you remember Tiger Wood's wife.

After about 40 games in the last two months there are a few mountains I would have hoped to climb over by now. But then again there is next season.

Not sure I can say anything quite so optimist about my fair isle vest project. I am taking this course on Craftsy and having put it off as long as I could by knitting this sweater:


However I have got to the end of the video lessons and no where to turn but to actual knitting. The instructor is very knowledgable, but fairly dippy (and coming from me that says something), there is more telling that she likes to knit samples than technical details like how not to lose you mind with 47 dangling ends going on and what to do with jogs. I suspect it has been so long since she found this hard she forgets to tell you how to overcome that part.

I figured this fair isle was a skill I should learn. I spent 4 nights winding skeins into balls and knitting samples trying to get gauge and getting used to the pattern. I have knit and unravelled and this is what the vest looks like at the present time:

Fortunately my gauge is still wrong so I am emergency ordering in some more needles in a smaller size from Amazon and that gives me some breathing room to settle down before I go once more into the fray.

I am finding all of this really hard. My head hurts.

But then I remembered what it was like to learn to sew.

How many things did I screw up before it got easy?

And at the end of the day I guess I would rather be someone who was still in the process of painful brain expansion than letting it roll out of sight like those bowling balls that go down the alley. (This is my head analogy I just realized).

I will keep telling myself that, primarily because I have spent a fair amount of money on this whole project without actually having knit one decent inch.

And in closing I figured a shot of my golf coach is in order. Here he is in one of my sewn creations, doing one of the things he does best: 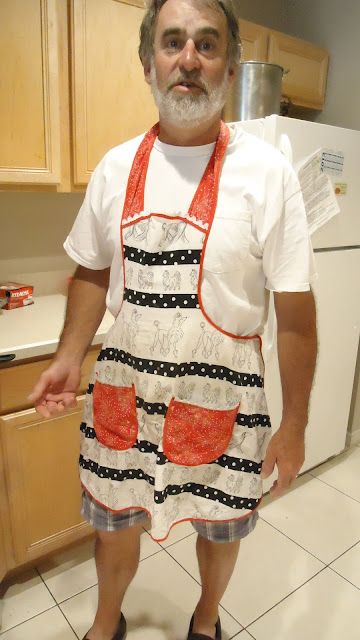 And now my own open letter to Vogue and company

Some very wonderful sewers, Robin and Shams, have articulated something I have had in my mind for a while now.

A while ever since my intelligent and highly capable sister-in-law, who does meticulous needlework so should be able to sew, told me she can't get sewing patterns to fit and, as a result, has more or less given up.

We spent a nice half day working on some basic alterations and I think got things figured out for her. I would like to share this experience with the powers that be at Vogue and company, so here is the letter from me.

I have been working with a family member to help her sew a basic skirt and shell that fit her. This was an emotional rescue operation.

My sister-in-law's issues were sooo simple. Larger bust and narrow hips, small boned with a slight upper bust and a waist that was a few inches smaller than her hips.

Like so many women, so many, she has been following the directions on the pattern envelope and buying by her full bust (and swimming in totally disastrous necklines and shoulders) for tops and buying by her larger lower body measurement, her waist, and suffering baggy skirts.

All I told her where the basics:

1. It is always easier to add than subtract.
2. Therefore select your pattern by the smallest of your measurements and add where required. Except for a FBA this is actually pretty easy for a simple garment, and when motivated anyone can do a FBA.

I think we got her situation figured out and this very smart woman is now good to go.

The thing is, through our whole session she kept saying to me "WHY DON'T THE PATTERN COMPANIES TELL YOU THIS? "

This is just lousy business.

Imagine a car dealer who sold cars but sent everyone home with the wrong key and left the customers to break the windows on their new cars to get in, or sign up for two year machinist courses so they could make their own keys.

After a while don't you think people would start taking public transport (RTW) or move over to the European models (indie patterns) where the key was handed over on a ring when you parted with cash. I mean wouldn't the extra for the import be worth it?

And wouldn't you think someone in Detroit or NYC or wherever the head office is would say "hey folks you are killing business here, give the folks their keys or we are not going to ever see them again."

"And BTW photographing our models on window sills or beside a bicycle aren't going to make up for the fact no one can actually get in and drive."

You would think this would be happening if the business was one of those that actually wanted to make money and survive.

But apparently this is not the case.

Personally I feel the issue might be even more structural.

Like the fact that the patterns are drafted for measurements not seen on this planet.

Fixing that would be a good place to start.

I have taught or participated in sewing classes for about 30 years and I have never, not once, actually met a size 10 with a 25 inch waist.

People are built, and certainly the ones that sew are, with middles large enough to contain stuff like vital organs and lunch.

If there are 25 inch people out there, and not on IV nutrition somewhere, they are most definitely the minority, right up there with people who have one blue and one brown eye and also are double-jointed and have perfect natural pitch and can see the puck out of the corner their multi-coloured eyes like Wayne Gretsky.

My point is these measurements are not a representation of a reasonable or even unreasonable cross-section of the population.

These measurements certainly have no business being printed on pattern envelopes in metal cabinets in fabric stores in cities and towns all over the world, where they are waiting for some optimistic 14 year old to chose her very first pattern which ends up being such a dog's breakfast (actually Rascal's breakfasts are home made and lovely so you need to know this is just an expression) that she spends the next eight decades chiming in that she "can't sew, nothing ever turns out, I am not just creative."

What I thing to do to nice people, Vogue and company.

Just because you have made a mistake with these stupid measurements and don't have the grace to warn people like my sister-in-law ahead of time that there are compensations to be made (since you won't change she has to) so she doesn't waste her good time and good money.

Money which she earns in an office where they do top secret work for the government - tell me how a woman can figure that stuff out at work but can't get the right skirt size?

I mean is that nice Vogue?

Is that any way to treat a customer? Or even just a decent human being.

The real fact as I see it is you all got in a rut working off the wrong dimensions to build your patterns but are in so deep that it is too much trouble to back out again and start from scratch in a new place, like say, reality.

This reminds me of the time my mother made what they call Matrimonial Squares in the prairies (but the rest of the world calls date squares) using salt instead of sugar, because they were both in jars and looked sort of the same.

You got to have the right stuff. If you don't things just won't get any better the more you mix it up. And until you do things are not going to be looking up in your corner of the sewing industry and there isn't a focus group or new lighting or material give aways to turn it around until you do.

Now this how to pack