CNN, my leatherette skirt, and Vogue 8750

I finally finished Vogue 8750, despite 125 students and the environmental hazards of nearly being hit by flying kitchen fragments on a more or less regular basis.

Here it is on me and in sort of a bent leg detail that is meant to show you the interesting seaming: 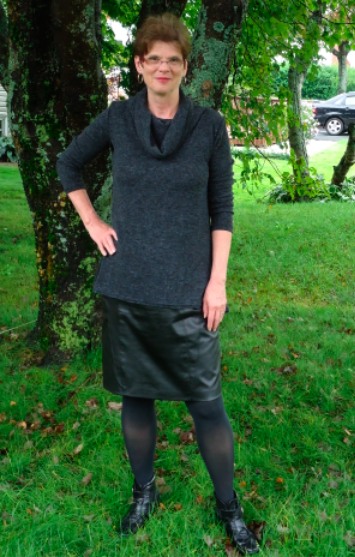 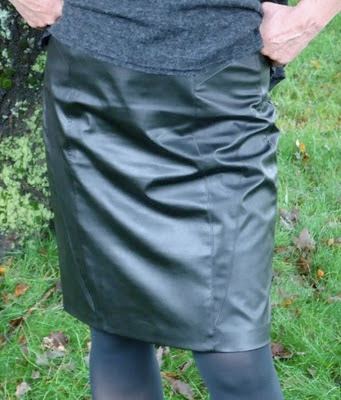 I managed to actually get this done by going AWOL to the sewing room and drowning out the sound of heavy equipment by turning the Sewing TV up real loud. I love the news and so my channels of choice were CNN and CBC Newsworld.


I did a lot of watching this guy do interviews: 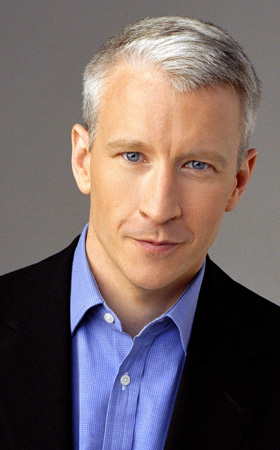 Somewhere along the way, I made up a "what if" scenario if Anderson Cooper ever showed up here and decided to interview me about this skirt. Here is how I think that would go:


AC 360: We are joined here tonight by Babs who has just finished the completion of a not leather skirt at the age of nearly 58, a project she has been planning on returning to ever since she did that thing with the iron on her first attempt in 1978.


Now Barbara how did you train for this project?


Babs: Well Anderson I have been making skirts now for 40 years. I have fully explored the waistbands that are too tight and the facings that are too loose. I have made them in velvet with the nap running up the front and down the back and am sure nobody noticed. I have made denim wrap arounds with ties so thick they didn't make bows and I have done the centred, the lapped, the hand-picked, once with pearls, not real, in each stitch, but now work exclusively with invisible zippers because you can re-stitch them 8 times and the stitches don't show from the right side. I find this a plus.


AC 360: Interesting. Can you tell us more about this specific project? My team here did some research and most not real leather is referred to as faux or pleather - what's with the leatherette?


Babs: Well Anderson I went back to the source on this one. Since this particular piece was bought by my next youngest sister in that discount place near the access road behind the Winnipeg airport, my suspicion is that it is leatherette, although I am almost certain, about 87%, that she didn't grab it from the car upholstery section and not tell me. This one of my sisters is pretty honest.


AC 360: Interesting. Now tell me if there were any moments in this project during you really, and this is not an age-related question, doubted you would be able to go the distance?


Babs: Good question Anderson. I was a bit concerned about the curved inserts to be honest. Four of them, two front and two in the back. Those can start pretty good, but you know how it is, once that presser foot starts moving and you start moving those pins-in-the-seam-allowance out you can just see it advancing - one layer longer than the other, like the Wave of Doom - and you know that you are going to be left with a 3/4" at the end. But this is a pretty well-drafted pattern and that almost didn't happen.


AC 360: Yes but to be honest did you trim off any extra at the end of the seam?


Babs: Can you notice anything in the picture?


AC 360: Interesting. We are running out of time here so in closing I have to say I noticed you didn't top-stitch the hem.


Babs: Good eye. I was going to but I was pretty pleased with my top-stitching, yes I know the picture is blurry, but trust me on this, and I figured a stitched hem would ruin the effect. I got some double-sided tape and used that instead. Man is that stuff slick.


AC 360: Interesting.  Finally Babs do you have any wisdom you would like to share with other women of your generation considering a leatherette skirt?


Babs: I sure do. First this is a cheap project. Second my leatherette has a very smooth knit backing so I didn't do a lining. It held up well at the Greek restaurant I made my husband take me to last night since he demolished my kitchen. Secondly, it doesn't show the dog hair and does not require ironing, I really mean that, and only used a rayon setting with a press cloth during construction. Third it is easy to maintain. The Tzatziki came right off with Windex. Fourth when I wear it I feel unbearably hip and cool and since I really am not either hip or cool I feel this skirt expresses that perfectly. It's not really leather either. And BTW this is a killer pattern - really slimming, makes this 18 look like 10.

Email ThisBlogThis!Share to TwitterShare to FacebookShare to Pinterest
Labels: Vogue 8750

A shout out to nurses


If you are a nurse I just want to say thank you. I was in having a conversation yesterday finding out that some surgery I was told 25 years ago might have to be done sooner or later - well I'm getting close to later. Doesn't matter what, no big deal, it's not that interesting to even me, but that whole thing was made better for me because of a nurse.


Doctors look at numbers and see you as a chart. Nurses look at your face and remember you are someone's mother.


Do you have any idea how important your work is? I hope so.


When I take over I am putting twice as many nurses into hospitals and paying them all twice as much. Three times.

Email ThisBlogThis!Share to TwitterShare to FacebookShare to Pinterest
Labels: Life

That old leatherette skirt still needs a hem and a photographer.

What I can do this morning however is start commenting on the instructions for this pattern.


The supply list suggests a grosgrain ribbon for a hem facing. I think what they really mean is a proper shaped grosgrain called petersham.


I happen to have some bought in a nice little notions shop in Nottingham England (the UK really has great tailoring supplies - sewing there seems to me to be more structured) when I was  visiting my husband's daughter a few years ago. I am the kind of traveller who brings back notions but no presents for the relatives and no pictures.


Sorry about that folks.


Anyway Nottingham is pretty far to go for waistband ribbon and I am sure you can get it online or at classy places such as do not exist in these parts.


I have used it in a few skirts and personally found it a bit rigorous for this squishy waist, but hauled it out for this project. The leatherette is sort of like bubble gum, bit of stretch, and I figured it would be stabilizing.


It is a fast and easy finish and here is how it works: 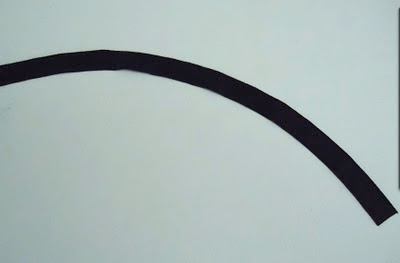 This is what Petersham looks like laid on a table.


It may look like grosgrain but it has a curve. This fits the body. The smaller edge is top-stitched wrong side to right side of the waistline and when it flips down the wider edge curves out  a little like the skirt so it's all smooth:

On another note I see in the news those two kids have finally been released from jail in Iran.


Their poor mothers. I can hear it now a few years ago, "Mom you are so uptight. Everybody goes hiking in the mountains near Iran these days. It's not like when you were a kid, just chill O.K."

The leatherette skirt is done except for the hem and I actually like it a lot. The pattern is great and fits.


I am going to get some pictures and comments up tomorrow if I can - my photographer took off his Cookie Monster suit today (huge, huge hit that was) and got into the destruction side of renovation. That took him off paparazzi duty.


You may remember that a few weekends ago the downstairs bathroom was gutted. Now I have a kitchen to match. Destructo man went through layers of wall, paint, flooring, back 50+ years.

I am feeling somewhat disorientated. This was not something I had scheduled, planned for, or expected to be happening this fall. I had this in my four year plan and this was not the year. Right now was supposed to be year one and the kitchen was year four.
Nonetheless (is that one word?) Things had to get moved out of the way of the tornado and my house looks like someone took all my stuff and flew over the house in an airplane and dropped out all out.
Now I am not a perfect housekeeper and can live with a fair amount of chaos, but when this was not on the agenda - well it sort of makes me want to take tomorrow off to go down the basement and spend the day doing hand-washing (an activity I find particularly soothing) or putting my patterns in a new order, or go buy chocolates and have a bath in the afternoon and eat them and read a murder mystery where the hero is one of those smart alec talking PIs women who has a kitchen. (Has anyone read the Spellman series? Hilarious. )
Instead I believe I am booked to do a performance as an adult at a local university. How did that happen?


But when I come home tomorrow I am putting on that leatherette skirt and stand in what used to be my kitchen and get some pictures taken. Makes sense.
Posted by Barbara at 9:27 PM 4 comments: