Finally a use for an embroidery machine

I have an older sewing machine, a Pfaff 7570, that does many decorative stitches plus hoop embroidery. I'll admit to you right now that I hardly ever, next to never, embroider anything. In fact I think the last time I hooped was to do big monograms for a coat lining I made.
Let's face it, no one really needs an embroidery machine unless they want one for fun. I keep meaning to embroider some towels or something, or his and her pillowcases, but I never get around to it. I think towelwise I was scarred years ago by the boys who one summer managed to lose about a dozen of my best towels at the pool. Eventually I read them the riot act and said no more towels until you guys go down to the lost and found and bring all those towels back.
They were very good about it. Marched down to the pool and brought me back 12 towels from the lost and found. Thin old Spiderman towels, towels with frayed edges and rust stains - I hadn't been specific enough that it was my towels they wanted back - and they didn't think I would notice anyway. Been reluctant to invest too much emotionally in my towels since then.
I also admit there are very few embroidered garments that do much for me, in fact I think some of the stuff looks a little cheap, and you know how classy I am. I also suspect that the invention of embroidery machines was a compensation idea by the sewing machine companies who have never quite recovered from the retirement of the pervasive home sewer.
I mean what do you do when there is no longer a sewing machine in every hall closet? Invent something that will give you what you would have made from 500 of those old machines.
At least.
Am I the only one who is finding getting cornered by a sewing machine dealer every time you look sideways to spend over $8,000 on a top-of-the-line a little thin? Are they crazy? Divide that by yards of good fabric.
I did that once and figured that I could make about 300 very nice dresses for that. And what would I use to sew them?
A straight stitch.
However I had a boring but very useful utility grey flannel pencil skirt to make this week. To keep my own interest up I put a large embroidered zig-zag on the inside of the waistband and used a decorative stitch to topstitch the hem in the lining.
I really enjoyed doing this.  Now I have transformed a useful skirt into something that I will really also enjoy wearing. Might do this again. 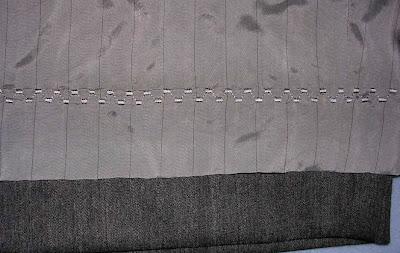 I have an embroidery machine...used it primarily when the girls were younger. But I've seen some people make some amazing gifts and other items, even a few pieces of clothing that I wish I had the time to duplicate. I think they have their uses, just like a microwave in a kitchen. We know it really couldn't ever replace a stove but it is a good piece to have in a pinch!

I use to feel that way about an embroidery machine until I got one. I make gifts all the time for people and even people are requesting that I do some work for them.

Not necessary, but I have made alot of money with mine. I waited til Babylock had an upgrade of their 6 needle machine and bought the previous model demo at a fraction of the cost.