I have been thinking about this a while now. Just when women start to breathe and lead lives of their own defining, someone somewhere decides they need to be slowed down.

Often these someones are fashion designers, who of course are just expressing larger themes.

In particular the shoes so many women try to wear these days seem to prove this. I mean a girl just can't keep up, all day on her feet, staggering behind in 5 inch heels.

When I see shoes like this, I think really? These are just designed to trip you up. I mean I love pretty shoes but do these look like they belong on the feet of someone who has worked to be comfortable in her own skin, on can stand on her own two feet? 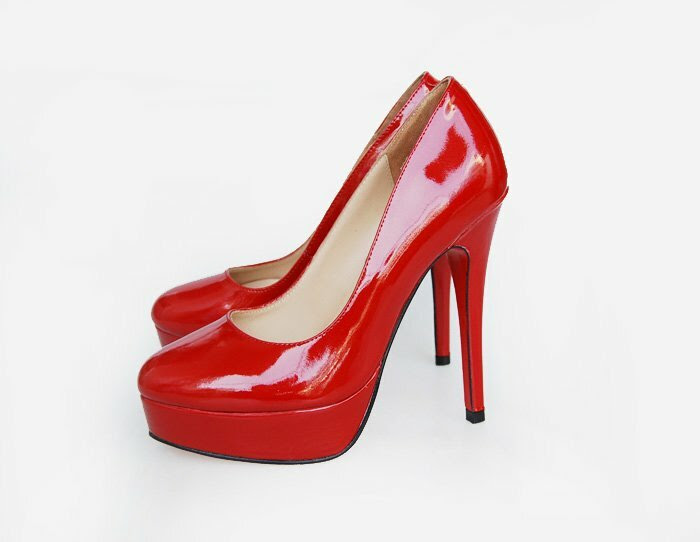 Which may be the point.

What do you think of this?
Posted by Barbara at 8:59 AM

Some of these doctors (in the linked article) sound like candidates for disbarrment, defrocking, what ever the medical equivalent is. Horrible.

ON THE OTHER HAND, I am amazed and saddened when I notice the feet of some women my age, I suspect deformed by years of extreme shoe styles they felt pressured to wear, and the pain with which they walk daily. So some foot surgeries are obviously required.

But toe removal to fit in pointed toe shoes? What is the effect on gait, etc?

But as always love your writing and wisdom.

I am a self-admitted shoe-aholic. But I wouldn't do anything to my precious, and fairly attractive feet, to fit in and/or wear those. But I wouldn't mind a pair to wear while I was seated somewhere just so I could admire their shiny, red high-heeledness.

I know of several bloggers and women I know personally who wear these type of heels daily. My daughter favored four inch plus heels like this until she had her son last year. I don't understand the why behind it. Does the higher heel make the shoe -- or the wearer look better?

When I was a bit younger and honestly, thinner, I frequently wore 3" heels daily. I like them :)

I have a favored pair of 4" TEAL suede pumps that are worn...when we're going to dinner! LOL!

They aren't uncomfortable...but then I'm not trying to wear them for hours on end either. Or walking around in them!

I have crazy heels that have never been worn and have thought about selling them off because I cannot do discomfort in the name of beauty anymore.

I have never been able to walk in a high heel! I use to be a secretary years ago and had to wear small heels, but after 2 pregnancies and widening of my feet, I can't wear them at all. Honestly, I'd rather a good flat sandal or a nice boot.

I can think of one blogger I see often in shoes like this. I'll swear, it looks as tho she is stuffing her feet into them--think muffin top around the edges of the shoe. No thank you; I'll take comfort any day.

I recently stayed at Volcano House, the historic hotel in Volcano National Park. At the breakfast buffet, I saw a young woman teetering on red shoes almost like these, but perhaps 7" total, including the platforms. She had to stoop to read the items on the buffet.

How on earth will she hike in the park if she breaks her ankle at breakfast?

BTW, an orthopedic surgeon told me that many hip and knee replacements would not be necessary if the patients had NOT worn heels for decades.

The change in gait and the extra stress put on joints causes long term damage that costs all of us more in insurance premiums.

We have cigarette taxes. Soda and sugar taxes have been proposed. I would like to be the first to suggest a Jimmy Choo tax on high heels.

I'm facing surgery for a Morton's neuroma not caused by high heels. I have spent a lifetime in boots and flats, hardly ever wear heels, but foot pain is real and debilitating. I don't understand the need to wear four inch heels but I'd love for once, to be able to wear my dress pumps (2" max)for longer than an hour for church. Sometimes I can't even do that.
Theresa in Tucson

I second Linda T.... that look is really unflattering and looks uncomfortable so imagine how it feels.I think a nice heel can look good but when they are that high it's ridiculous. A lot of stuff comes to mind about those shoes and what they are 'saying' but it's not polite talk so I won't say it but I think you'll know what I mean.

LOL! - some of those high heels with the raised platform look like hooves.

I watched two women entering church the other morning wearing replicas of that particular kind of shoe. Both of them looked like leaning towers of Pisa as the top of their bodies were vaulted in forward motion long before their legs. Painful to watch.

In the 60s, when very high heels were also fashionable, a shoe salesman watched as I (5'2") tried on a pair of 4" heels. His comment: "You'll get a nosebleed wearing those things." Not sure if it would be from the height of the shoe or falling on my face, but either way, I agreed.

Theresa, I had neuroma removed more than 15 years ago. Life changing. I too wore/wear flat shoes up to 1 1/2 inch heel. Some people just get them.

This is criminal! Remember when Chinese girls and women had their feet bound into little balls, so that they could not even walk unassisted? No? That is because it has been so long ago that mutilation of one's feet for the sake of "beauty" was declared illegal. If you've ever read any of the unbowlderized versions of the Cinderella story, you'll remember that one of the stepsisters cut off her toes with a knife so that she could wear the little shoe, and the other sliced off her heels. The bloody footprints they left as they accompanied the prince away from the house gave them away. In one version of the story, the stepmother has red-hot iron shoes welded onto her feet and is forced to dance at the wedding party.

Shoes are such a personal choice. I say wear what you are comfortable wearing. For me, that is something a lot closer to the ground!

I know these are worn for fashion but when I see women on the street in these and the comical, not sexy gait they use to walk, I just laugh at them.

High heels I suppose make one ' s legs appear longer and slimmer and of course definitely taller which I am supposing is something that 'society ' has dictated is more attractive . I do own one pair of heels which are a few cms for ' special ' that is they get worn once every one to two years! Why do we never see men wearing high heels?

Oh thank you, thank you for posting this! It drives me crazy to see celebreties stomping along on those ridiculous shoes they wear.So much for the hard won women's rights as you say.