Book a 30 minute FaceTime or Skype chat to help work through a sewing issue.

Bra report in stages: the pattern, adjustments and thoughts 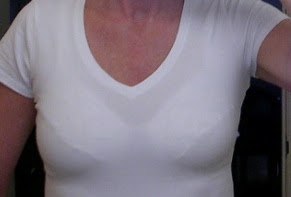 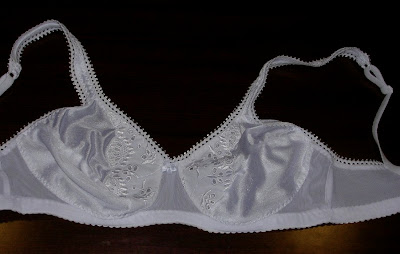 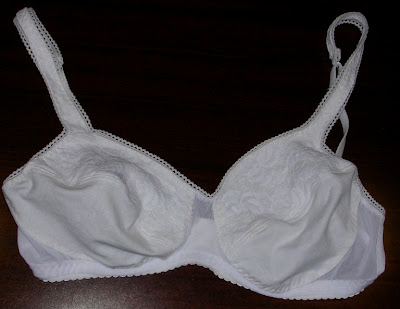 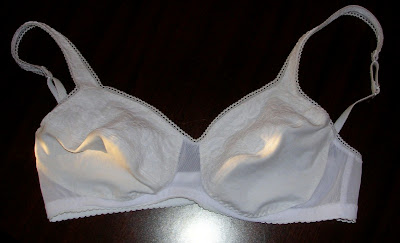 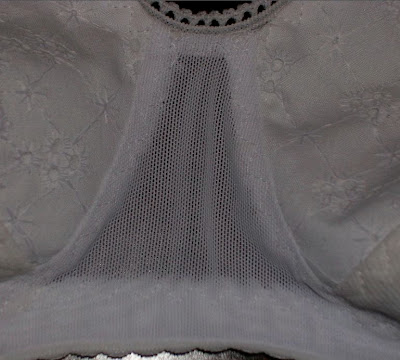 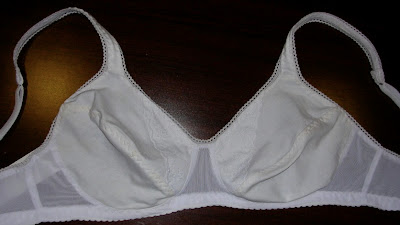 OK, it has been a flat out week with all my projects but here is the bra report. I am going to post this in stages with different headlines to get my thoughts in order.
I have made two cotton/lycra bras, (one with cotton eyelet overlay in the upper cup, one with stretch lace as a second layer in the upper cup),  one with one shiny tricot with woven lace layer in the upper cup, and one sort of matte heavy weight knit with stretch eyelet over lay in upper cup.
None of these bras are as fancy as those I have seen other sewers make, but they fit me well, are comfortable (the cotton interlock are of course my favourite), and have got me to the point where I am construction confident enough to get more creative. I have four more cut out in black.
First of all this is a really well drafted pattern. Things that need to be the same size so they fit together later in construction actually are and actually do. This hardly ever happens so I am pleased. I also really like that the straps are made of fabric to match the fronts well over the shoulders.
My first bra was so weird even Rascal laughed, it looked like something that a 90 year old would have worn in 1922 if you can picture that, but I quickly realized that I had the same problem Robin reported when she used this pattern and that was that the pieces under the arm were too large, that explained why it was falling forward on my front. Robin solved this with an underarm dart and I did essentially the same thing by changing the angle (straightening them really) on the front and back pieces that met in the side seam to eliminate that extra. Worked great and my fitting issues were 90% solved. The final 10% was achieved by taking in the cup seam a little as it neared the underarm.
The bad thing about fitting a bra is that you have to actually complete the whole thing before you can access fit (make you first one with your worst stuff) the good thing is that there are so few seams that there are really a limited number of places where you have to adjust and small adjustments make a big difference.
If you can face making one or two bras to perfect your fit (about an afternoon each if you are just learning) you will have a reliable pattern to make something for next to nothing that can cost a fortune in the stores. Next to nothing if you are working with leftovers or have collected the materials along the way. More on supplies later.
As I wanted to make a wireless bra I did these things for extra support:
1. The pattern calls for one layer of lingerie type tricot for the under and between the breasts part on the front. I substituted a layer of Powernet which I think worked quite well.
2. All sewn bras have at least one seam, as this one does across the cup. This has some disadvantages for T shirt wear (and I have posted a picture of one bra in a too tight T shirt so you both see what I mean and so you can see the kind of non-wireless support I got). The instructions tell you to use a single layer for each and to top stitch the seam allowances open. I don't do that all that well with 1/4" seams in tricot and in some cases (like the one shown here) did a triple zig zag instead. I am not happy with this as of course it articulates this seam even more, so in later versions ( I made four successive bras) I cut the bottom cup twice and sandwiched the upper cup between the two and flipped it up, encasing the seam, which was much nicer.
3. On the subject of cups I did all the lower cups double (see above) and I would advise that.
Finally how supportive are these wireless bras? Pretty good I would say and enormously comfortable. I have some wires and will do another version soon with those to see, but putting them up to my bras I would say they do add shape to the cup and definitely move the cup in at centre front right up to your sternum that extra little bit.
My analysis: if bra less is 0% support, these wireless are about an 87% and I figure the same bra with wires would be about 93-94%. 100% would be my expensive bra that holds me up and completely rigid and leaves bright red marks in my chest bone and all around my body.
I also calculate that my wireless version is about 11-13% more comfortable than the same version would be with wires. But that needs to be field tested.
You do the math.
Posted by Barbara at 10:43 AM

AMAZING! I am so happy for you that you achieved great results so quickly.
Oh it strikes that frugal nerve in us, too, doesn't it? Yay!

I agree that is a great pattern.

I've been looking around at all sorts of bra websites and your information is far more useful. I have yet to find a pattern I like as I don't like the ones with the wide band in the middle - I prefer to have the cups separated. I am fortunate to have stores near me that stock good cheap supplies and I found a whacking length of power net at the opshop for 60c! Now I've read your post I'm really keen to start bra making. Thanks for the inspiration!

Glad to hear that some of this was helpful Carol. I lived in Melbourne for five years and remember that you have not quite lost all your interesting fabric stores yet. Good luck and post your results.

And Robin I hope you don't mind being referred to as my bra-making pioneer.