The biggest challenge with the projector set up is getting it fastened in the appropriate place.

That issue starts with your choice of projector. The normal setup is a projector that sits on a table and projects on to a wall. That works great for watching Sesame Street but you want to project it to a horizontal surface and have the image large enough to cover the entire piece of fabric for sewing pattern projection:

A short throw projector projects a large image over a short distance but these can be hard to come by and are expensive.

By contrast a regular projector needs in the range of 78 to 86 inches to avoid to have to keep moving the image on the computer screen and moving the fabric to get all the pieces projected onto the fabric in an efficient way.

Unless you have high ceilings the best and least costly option is to purchase a unit that is made to sit on a table (ours is a Bomaker) then devise or purchase a mounting bracket that will allow you to project from the ceiling to the floor - around 82”. I used a shelving wall support and fastened the projector to it and then fastened it all to the ceiling. Once it is fastened to the ceiling it needs to be plumbed in two directions to ensure accurate projection of all the lines.

First direction to check will be across the the front to the rear feet of the projector. You will need to develop a system of leveling if one is not a part of the mounting bracket. I, for instance, used the wooden part of a clothespin that is wedge shaped as my levelling aid. 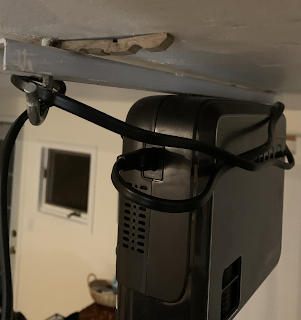 The other direction to level would be across the front of the projector where the lens is. 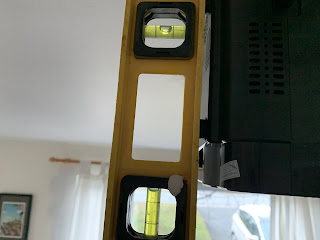 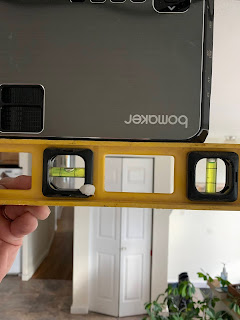 Checking plumb across the front.
If the image is not projecting accurately after plumbing the projector there is an adjustment knob (keystone) adjacent to the focus knob that tilts the lens so as to project the image squarely at the surface.
Next task is to check scale of the projection.

There should be, as part of the pattern, a calibration square, that is a specific size. You will need to change the size of the PDF in Adobe to match a) the output of the projector b)the pattern scale and c) the distance from projector to surface onto which the image is projected to get the calibration square the correct size.

For instance with a Jalie pattern, a Bomaker projector that is 82” from the surface scale needs to be set at 21.1% through the Adobe software to get the 2” square to project accurately.

This achieved through trial and error. Once you have the square projecting accurately you need to check the size of the image as far away as possible from the center of the image to verify accuracy.

If you cannot get the image to project accurately across the entire image with these steps you may have purchased a projector that cannot be used for this purpose. We initially made that error and returned the bargain priced one and bought the inexpensive “Bomaker “ that works flawlessly.

There are a few other setups that are used. There is a setup where a projector sits on a table or shelf and projects to a table at 90 degrees and a setup with a mirror that projects in the same manner. I understand how these work but have not used or set one up.

Your last post got me all excited at the idea of projected patterns.
Then today's post came in and I showed it to my husband, who is an engineer but swears he doesn't know which end of a screwdriver you have to use whenever a handyman job pops up at home. He gave me 'that look' and pointed out that our house has double-height barrel vaulted ceilings, saying '82" above the surface, huh?'and 'Level in both planes, huh?'. I guess I'm not getting projected patterns any time soon!
Maybe we could just move house? :D
Fascinating posts, though, and I wouldn't be surprised if this was the way things will go - no more paper or printing ink chemicals so the trees and rivers are safe at the very least. I look forward to hearing more about how this method of pattern placement goes for you.
Keep well and stay safe,
Sarah

They don’t always have to be fastened to the ceiling (and probably if you are qualified to “build” a sewing project, you can install your own). They can be mounted on a wall or a bookshelf sometimes. There’s some installations that use mirrors too. I’m just starting research, there’s a Facebook group that has a wealth of info

This is an amazing innovation in the sewing world and I'm very glad to read how your husband did this. He gave a very clear explanation. ....... Thank you!